The Eagles (13-3) on Sunday host the NFC East-rival New York Giants (9-6-1) for a 4:25 p.m. kickoff at the Linc in what has suddenly become a suspense-laden regular-season finale.

Hoping to avoid an inexplicable late-season collapse, the Eagles will have one more opportunity to clinch the NFC East title and secure the No. 1 seed for the 2023 playoffs after coming up short against the Saints in Week 17.

While all signs point to the return of their MVP candidate quarterback Jalen Hurts, indications also point to the Eagles benefitting from the Giants’ playoff outlook, all but assuring their division rivals – who are locked into the sixth seed – will rest their key starters.

Here are four X-factors poised to impact Sunday’s regular-season finale at the Linc: 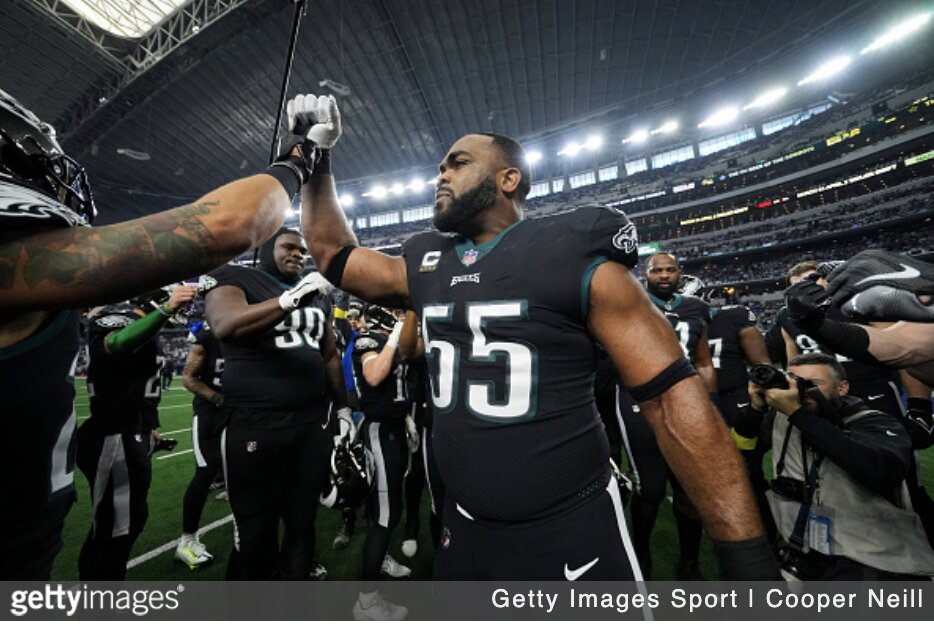 RB Kenneth Gainwell: In light of the recent knee injury seemingly plaguing Miles Sanders,  who played just 22 snaps in Sunday’s loss to the Saints and was a limited participant at practice through Thursday, it’s fair to wonder how heavily the Pro Bowl running back will be scripted into the Week 18 game plan. Gainwell, whose 28-yard third-quarter touchdown run was nullified by what was deemed a hold by Landon Dickerson, led all Eagles at the break with 17 receiving yards. Sure, his usage has been sporadic throughout the season, but if the Eagles opt to preserve Sanders with the postseason looming, I’d anticipate a more substantial role for Gainwell rather than Boston Scott. The former is the better pass catcher, a more decisive short-yardage runner, and offers a more diversified skill-set. The second-year running back finds the end zone this week.

DE Brandon Graham: A first quarter neck injury to Josh Sweat thrust Graham into his most significant snap share of the season (74%) last week, and with Sweat sidelined for at least another week, the 13-year defender will have a chance to add to his career-best 11-sack total. Graham, you may remember, accounted for a trio of sacks and forced fumble the last time these teams met for his second NFC Defensive Player of the Week honor. The Eagles totaled seven sacks and 12 quarterback hits that afternoon, so it would appear the stage is set for another sack bonanza. Given the matchup and what’s at stake, expect one of the franchise’s all-time greats to answer the bell.

WR Richie James: With starting receivers Darius Slayton and Isaiah Hodgins presumably slated for cameos, James figures to garner the lion’s share of targets when the Giants take to the air. The diminutive pass-catcher boasts exceptional short-area quickness and will likely serve as a safety valve on intermediary routes for backup quarterback Tyrod Taylor. James, third on the Giants in targets (70), has emerged in successive weeks, combining for 166 yards and a touchdown on 15 receptions (18 targets). In the team’s Week 14 loss to the Eagles, it was James who led all Giants pass-catchers in catches (7), yards (61), and targets (9). He also found the end zone. James is more of a volume receiver who can ably churn out yards after the catch than a game-breaker deep threat, but Eagles defenders must get him on the ground to limit his impact.

LB Jaylon Smith: The 27-year-old Smith has been productive since joining the Giants’ active roster in early October, qualifying for second on the team in tackles (88) behind only safety Julian Love despite appearing in 13 games. He’s registered nine-plus tackles in each of the past four games. But as much as the veteran has been a ball magnet lately, Smith has largely been an enigma throughout his seven-year career and prone to inopportune lapses. One of Smith’s most glaring weaknesses is speed and lateral movement, as he often resembles someone traversing quicksand. With a dynamic tight end like Dallas Goedert – who has just six catches since his return on Christmas Eve – it behooves the Eagles to exploit a vulnerable second level on intermediary routes to establish a rhythm and keep the offense on schedule.