Hurts To The Rescue

Despite struggles over the past two weeks, the Philadelphia Eagles have a chance to forcefully close out the regular season and clinch the top NFC seed, with the potential return of their MVP candidate QB and playing a Giants team expected to rest starters.

Starting quarterback Jalen Hurts, who has missed the past two games with a shoulder sprain, was listed as questionable to play Sunday on the team’s official injury report, but Hurts participated in Wednesday’s walkthrough session for the first time since suffering the injury and was a limited participant in Thursday and Friday practices, putting him on a trajectory to start if there aren’t any setbacks.

Also, the team waived reserve offensive guard Sua Opeta to clear a spot on the 53-man roster, likely to sign punter Brett Kern, who’s out of elevations from the practice squad. Two more spots will need to open if the Eagles decide to activate safety C.J. Gardner-Johnson and defensive end Robert Quinn, both of which were activated into the 21-day practice window this week.

On the latest “Inside The Birds” podcast, Adam Caplan and Geoff Mosher previewed the matchup against the Giants and gave their final score predictions. 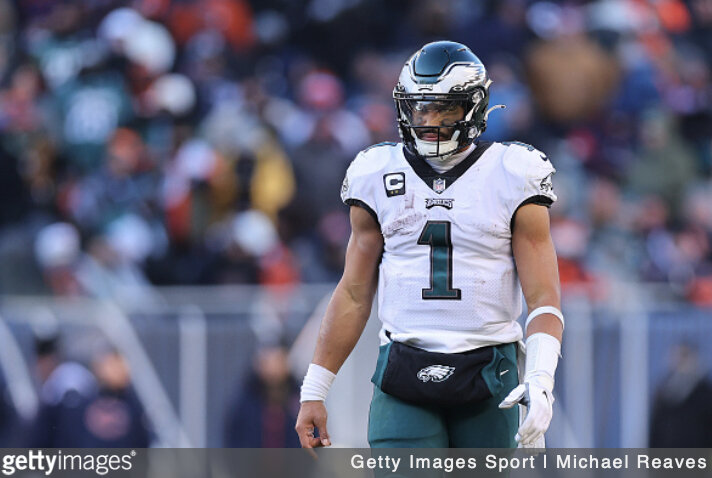 All signs are pointing towards the return of QB Jalen Hurts

Geoff Mosher: “He made it to the walkthrough, participated in that on Wednesday, which he hadn’t done the two Wednesdays prior, and then even though listed as limited in practice Thursday, he was still taking reps and throwing the ball. These are positive developments that seem to put the trajectory at Jalen Hurts starting against the Giants.”

Adam Caplan: “This is the natural progression. In a speed walkthrough, you’re walking through at a brisk pace. Friday morning is the big thing. He threw more on Thursday, so you want to see how he feels. It would be a small surprise to me if he doesn’t start.”

Mosher: “Even with backups, (Giants DC) Don Martindale is going to do what he does: he blitzes and tries to break down your protection scheme, and then you also know that your QB is still nursing his shoulder. I would imagine that the QB run – the zone read quarterback keeper – is not going to be the most prominent part of their offense, especially with the way they were able to move the ball through the air the last time they played the Giants.”

Caplan: “When you have your starting QB out there, you generally think he can do anything, but you also want to protect him as much as you can. You have to be very careful to what you expose him to. You can’t give him unnecessary contact with that right shoulder.”

Caplan: “Fabian Moreau is a guy that came out of UCLA. Small corner, four or five teams, had some injuries. He’s a starter now with (Cor’Dale) Flott and Nick McCloud. Because of the lack of importance to this game, you’re probably not going to see much of these guys at all. You can’t rest everybody because you only have 47 players on game day, so here’s what you’re probably going to see in the secondary: Rodarius Williams, number 25, who was a sixth rounder last year, Jason Pinnock, formerly of the Jets.”

Mosher: “This is the reason why it can get ugly. The Giants will be playing backups. The Eagles are going to have to play starters. In the first matchup when the Giants were playing starters, it was ugly, so you can imagine what it would look like with the Giants playing backups against this Eagles [defensive] front.”

Caplan: “In the first matchup, they just housed them. This was one of their best games of the year. Stunts worked, seven sacks, hit (Daniel) Jones 12 times, Evan Neal did not play well, B.G. (Brandon Graham) had three sacks. It was a virtuoso performance by this defense…Here’s what I believe you’re going to see on Sunday: offensive line Matt Peart from UConn at left tackle, he’s coming back from a torn ACL, Ben Bredeson who they traded for from Baltimore, he started earlier in the season then got hurt, Nick Gates will be their center, former Eagle Jack Anderson, and then Tyre Phillips who they claimed off of waivers, they started him earlier this season at right tackle. At some point during the game, if they’re not starting, they’re going to take over.”