‘So Many Guys Wide Open’

In a hard-fought Christmas Eve battle against the rival Dallas Cowboys, the Philadelphia Eagles came up just short, 40-34, for their second loss of the season.

On the Week 16 edition of Inside The Birds Postgame Live, Adam Caplan and Geoff Mosher were joined by Eagles Hall of Fame offensive tackle Tra Thomas to break down the defeat. 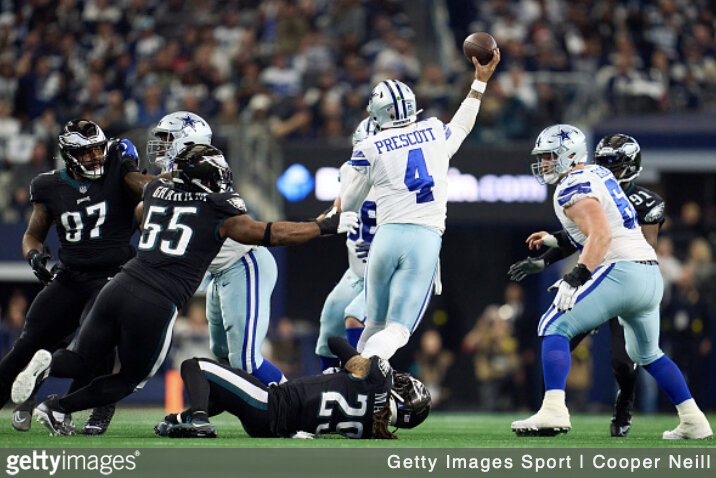 Tra Thomas: “You go out there and throw two interceptions and then two fumbles, one of them was because of a handoff and then Miles Sanders has a fumble. When you have situations like that, it’s going to be a problem.”

Adam Caplan: “In the history of the National Football League, if you’re minus-2 or more [in the turnover battle], you lose 75-80% of the time. Today, they were minus-3 and in the Washington game they were minus two.”

Thomas: “I’m not going to sit here and say Gardner Minshew had a terrible game, he made some really nice throws throughout the game. But there were some throws where he needed to stop putting so much air under the ball. There were several throws that could have been turnovers. It looked like you’re in practice because in practice, you’re out there just throwing up balls to help the defense, the defense feels good about it and get a couple of picks. I felt his balls were in that same rhythm where he was just flicking it up there and there was too much air on some of those passes. When you come out there with two interceptions that’s a tough showing.”

Geoff Mosher: “I thought the interception Minshew threw was actually a pretty good ball takeaway by DaRon Bland. It wasn’t like the pass was thrown behind him.”

Caplan: “Minshew had a solid game, but he could have had four picks. He had two, one in the first half and one in the second half could have been picked off. You have to make better decisions with the football. The one where he turned his body, you cannot turn your body in the face of pressure because you’re almost throwing a blind pass. All of that stuff is correctable, but he definitely made mistakes.”

Mosher: “If the Eagles had won, the big hero of the game absolutely would have been Devonta Smith, who has really been coming on as of late. He made some ridiculous catches, including a little fingertip one on the last drive which made me think they were going to win that game because everything they were throwing to him was glue.”

Thomas: “Some of those sideline catches that he makes, it’s just ridiculous. It’s body control, his ability to catch the ball in traffic, he is an extremely exceptional athlete out there at receiver. He deserves that 1,000 plus yards.”

Thomas: “When you’re talking about the secondary, it’s just like the offensive line. Everything is depending on spacing and being where you’re supposed to be. Some of the stuff has to be unspoken and you just have to have a feel for where the other person is going to be. When you start having different bodies moving in and out of there, it makes it a lot more difficult.”

Caplan: “They left so many guys wide open. They had free releases all game. That’s a problem. I know they’re not a big press team, but you have to adjust during the game if it’s not working.”

Caplan: “I looked at the numbers and saw six sacks. You could have fooled me, it seemed like one. They hit Prescott nine times, but talk about inconsequential stats. They were completely useless.”

Mosher: “I agree with you on the pass rush. It was there numerically and statistically, but I thought it took too long to get it going. Fourth quarter, they did have some big stops. Dallas had to settle for some field goals when you know they were trying to get touchdowns. I thought maybe they were starting to play a little more line games. It seemed like in the first and second quarter, we didn’t see as much of the stunting and line movement that we had seen in the last few weeks.”