The Philadelphia Eagles are set to take on a Chicago Bears team that, while struggling, features a rising star at the most important position.

On the latest episode of Inside The Birds, Adam Caplan and Geoff Mosher previewed the Week 15 matchup and gave their final score predictions. 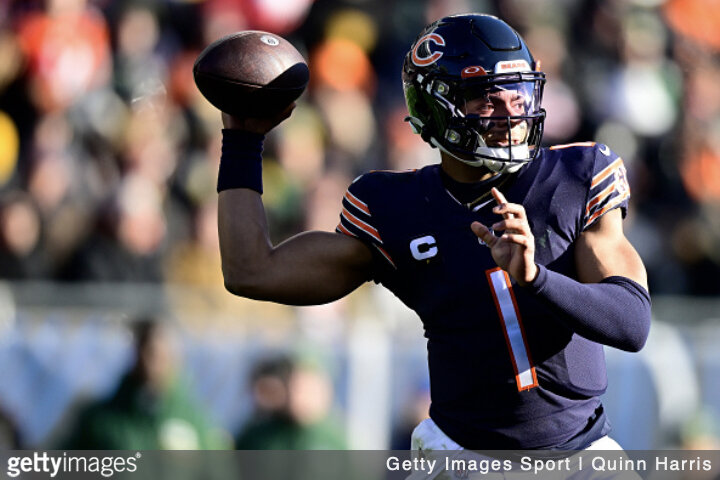 Adam Caplan: “Barring some setback, I’d put him in the probable department to be activated by 4 p.m. [Saturday]. If he’s not, it’ll be the following week.”

Geoff Mosher: “He has roots in Cover 2. When he was with Dallas, it was much more of a pure Cover 2. When he went to Indianapolis, it started that way and then he got out of it a little bit. I think he was just trying to change up what he did and adjust to his personnel. The Bears are heavy zone, there’s going to be a safety deep, and there should be opportunities when you face this style of defense to welcome back Dallas Goedert with a lot of nice passes.”

Caplan: “Jaquan Brisker just came back from a concussion. He’s a good second-rounder. Their secondary down the line is probably going to be pretty good. The Eagles won’t shy away from throwing it, it’s just a matter of finding holes in the zone defense.”

Mosher: “I do think the Eagles will come out throwing in this game, I don’t think they’ll come out throwing deep. I think they’ll come out quick game, RPO in full effect, mixing run and pass, they might hurry it up. I can see them playing a very ball-control style of offense against this Bears team that’s probably going to have a lot of trouble stopping them in what they do more so than an explosive type of offense… The matchup to watch is A.J. Brown against Jaylon Johnson. Johnson is a good cornerback for the Bears. He’s a tough, physical corner.”

Caplan: “Chicago’s bad against the run, and there’s a reason for it. They’re going with a committee at defensive tackle. They run a 43 front, very static and predictable. Three veterans – Justin Jones who came over from the Chargers, Armon Watts who was claimed off of waivers from Minnesota, Mike Pennel has been in the league forever. They’re not explosively athletic, they’re just OK. The Eagles will have no problem running on them. They’re young at d-end. We talk about the Robert Quinn trade, they wanted to take a look at Dominique Robinson who was a fifth-rounder, Trevis Gipson who was drafted in the fifth in 2020, and Al-Quadin Muhammad who was with Eberflus in Indy. They just don’t have any talent up front.”

Mosher: “The Eagles should be able to block this front with zero issues. This is not a heavy blitzing team.”

Caplan: “This kid is so gifted. There’s a reason why he was a first-round pick. He has enormous arm strength, he runs like a gazelle. He eats up ground and is super explosive.”

Mosher: “For the first five games, Fields was averaging about 40 rushing yards on seven attempts per game, that’s not a whole lot. Since then, he averages over 10 rushes and over 100 rushing yards a game. That has actually helped him in the passing game, as it opens up what you can do. His passer rating since Week 5 is 91.9, which is pretty good. This is a Justin Fields operation and if you can stop him and force him into bad throws and contain him in the red zone, I imagine that’s where you end up making your way in stopping the Bears offense.”

Caplan: “As it was explained to me, more than half of the sacks are on Fields because he’s still not sure where to go with the football. That’s why he bails and runs the ball. He’s been sacked 40 times. They’re going with a rookie, Braxton Jones, at left tackle. Teven Jenkins, they knew it would not work out at tackle so they moved him to guard, he’s not terrible. They’re below average. This is a game the d-line should eat. I don’t think this Bears line is as good as the Giants line and that’s saying something.”

Mosher: “I got it 38-16 Eagles. I see them being able to move the ball very easily, a lot of ball control. I think maybe Chicago can get up and down the field, but I don’t think they’ll be able to score touchdowns, maybe get a couple of field goals.”