Fielding the punt at his own 20-yard line, Titans return specialist C.J. Board accelerated upfield before a violent collision abruptly halted his momentum.

As if fired from a cannon, an unfamiliar No. 53 bolted down the field with Board in his crosshairs, delivering the bone-crushing hit that ignited the raucous crowd. 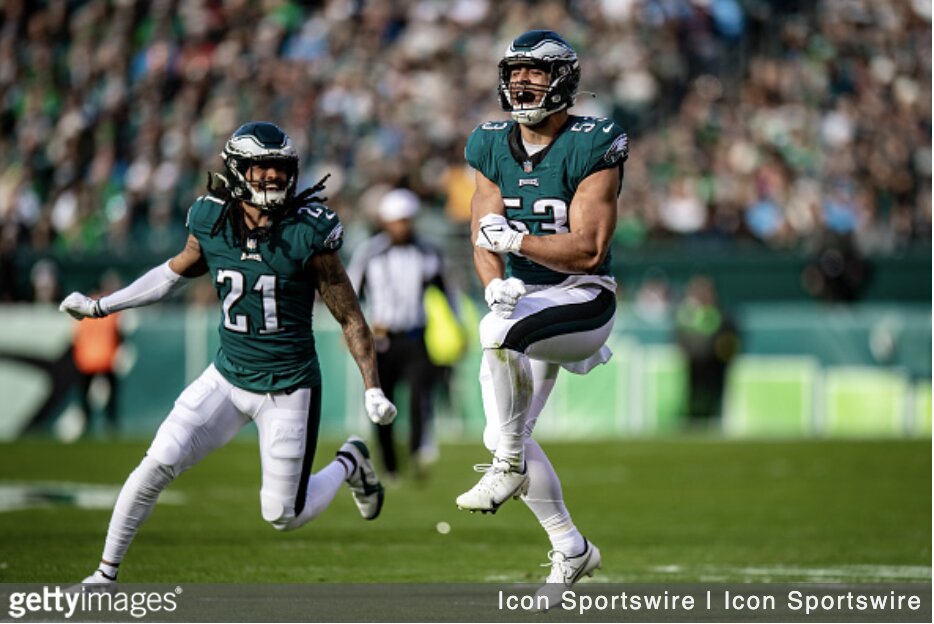 Christian Elliss, blazing downfield in the No. 53 jersey, reduced the damage to just nine yards, but in retrospect, his tackle carried a much greater significance than one of that variety would ordinarily warrant.

For 12 weeks Elliss was confined to the Eagles’ practice squad, honing his craft, showcasing his progress on the scout team and miring in relative obscurity in hopes of eventually earning regular-season snaps.

In fairness, there are no shortage of players in Elliss’ predicament, hopefuls languishing on practice squads across the league.

But when it appeared the dam had broken for an embattled Eagles’ special teams – one that allowed 172 return yards to the Packers’ Keisean Nixon in Week 12 – it forced the team to exhaust all options and cleared a path for Elliss to appear in his first meaningful game since making his NFL debut in the 2021 regular-season finale.

On Wednesday, the 23-year-old linebacker learned of his impending elevation to the active roster ahead of Sunday’s marquee clash with the Tennessee Titans.

And for at least one game, Elliss catalyzed an inspired effort from a beleaguered special teams unit presided over by coordinator Michael Clay, logging 31 snaps – 10 on defense – and contributing three tackles in the 35-10 thrashing.

Clay’s faulty coverage unit held Board to a pedestrian 20.7-yard average on kick return and allowed 42 yards on four punt return opportunities – 19 of which uncharacteristically were the product of one return – and combined for six tackles.

“I think you have to have a little bit of crazy,” Elliss admitted after the game, when asked about what it takes to be a successful third phase contributor. “Because if you think about it, you’re running down there and some guys reach 23 miles per hour – some slower guys hit like 19, 18.

“It’s like a car wreck every single time, so you have to have a little bit of crazy to you. I wouldn’t say I’m full-fledged crazy, but I definitely have a few screws loose, and that allows me to go down and go, ‘OK, I’m gonna send my body into this hit. It’s OK; he’ll probably hurt more than I do.’”

Maybe the coverage team flying around with a renewed ferocity and urgency resulted from the bottom falling out, forcing the team to recognize the magnitude of its biggest shortcoming.

It’s also possible that the Elliss elevation served as a wake-up call to several special teamers who were clinging to the fringes of the roster.

Elliss clearly played a prominent role in the resurgence but dispelled the notion that his presence stoked the dimming flame.

“I attribute it to [Michael] Clay and his coaching,” Elliss said. “As a special teams coordinator, he made our jobs really easy … do your job, bring energy, but make the play when it comes to you. So, I attribute it to Clay.”

Despite his arduous path to the 53 – including brief stints on the Eagles’ practice squad as a rookie – it appears Elliss has finally found a home in Philadelphia, where his hard work and tenacious practice habits behind the scenes didn’t go unnoticed.

As a result, the 6-foot-3, 231-pound Idaho product was the logical choice when the Eagles made the inevitable decision to reassess their personnel.

“I’ll make the play when it comes to me – but I’m gonna do my job first. There’s obviously things where I need to grow and things that I have to fix today, but I think their trust in me made it a lot easier.”

Elliss, whose father Luther, was a two-time Pro Bowl defensive linemen drafted in the first round by the Lions in 1995, isn’t preoccupied with pondering how his impact on Sunday will translate going forward, or if he’ll become a mainstay on Clay’s unit.

As he’s always done, the second-year pro intends to control the variables he can influence, and restrict his focus to the moment.

“I don’t brag about tomorrow ‘cause you don’t know what the day will bring,” he said. “So, I’m gonna take it one step at a time, one game at a time, and I’m gonna let whatever happens, happens.”