PHILADELPHIA – Tennessee Titans punter Ryan Stonehouse trotted onto the field in anticipation of his fourth punt Sunday following an abrupt three-and-out coming out of the break.

In the wake of a daunting 21-10 deficit, the AFC South-leading Titans appeared on life support, and were now set to relinquish possession to an offense that had already accumulated 300 scrimmage yards by intermission.

Standing on his own 15, the rookie punter booted a 62-yarder to the Eagles’ 23-yard line – and the ensuing sequence set the table for another Eagles scoring drive.

Awaiting Stonehouse’s punt on the opposite end, Eagles return specialist Britain Covey eagerly anticipated his latest opportunity to enhance what had already been a career afternoon for the undrafted rookie.

The meticulous Covey tracked the ball as it soared through the crisp autumn air blanketing Lincoln Financial Field before ultimately securing possession.

With his eyes now fixated upfield, the elusive Utah product found the crease he needed to wiggle through and accelerate into the open field.

The play covered 27 yards and gave the Eagles possession at midfield, a nice uplift for a return unit that had struggled much of the season.

On most afternoons, Covey’s boost to the return unit would’ve caught more attention, but the team’s 35-10 rout of the Titans – including over 350 yards offense – seemed to overshadow the improvement, almost rendering it a footnote. 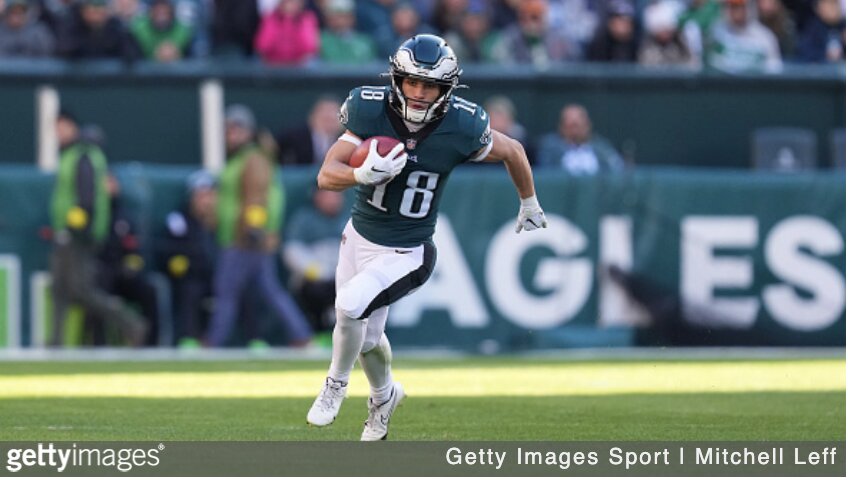 Undrafted rookie Britain Covey finally gave a spark to the punt return unit against the Titans.

For perspective, Covey – who had never eclipsed more than 34 return yards in any game this season – had already established a new career-high (47) in the first half.

In addition to affording the offense a short field, his three returns of 20-plus yards galvanized an energetic sideline in a way in which special teams hadn’t this season.

What’s more, Covey’s career-high 105 punt return yards against the Titans were the second-most return yards by any NFL player this season.

“That’s what’s funny,” Covey beamed after the game. “I’m not a different player now than I was 10 hours ago. And really, what clicks, is you just get opportunities. Sometimes it’s difficult to be in a rhythm when you have one opportunity per half.

“And so, to get a few opportunities back-to-back-to-back really helps me and the unit. Obviously, the game is slowing down for me a little bit, but more than anything it’s just taking advantage of opportunities because not every punt is really an opportunity.

“If they get a five-second hang-time, there’s not much you’re gonna do with that. But when someone out-kicks his coverage with 4.2 hang time, you have to take advantage.”

But after his career-best breakout against the Titans, the  young returner soared to sixth in punt return yards (235) and fourth in opportunities (25) while also boosting his average to 9.4 yards per return.

Covey displayed a keen sense for when to make the right move on his returns, along with unflinching confidence, embracing every opportunity.

He helped fuel a special teams unit, presided over by coordinator Michael Clay, that showed more urgency that it had all season, especially as outside criticism of Clay had mounted over the past few weeks.

But Covey, in keeping with Clay’s mind-set, never lost sight of the objective or bigger picture.

“We’ve been pretty conservative, just because of how good our offense is,” Covey acknowledged. “And my main job is to secure the ball and just get upfield. That’s kind of been our go-to for these first 10 games, and honestly, it’s worked. I mean, we haven’t had the best return yards or huge returns, but we’re 10-1, right?

“And when you have such a good offense, you don’t have to take risks. So, just talking with [Michael] a little bit, we started to – I don’t know if it’s necessarily take those risks – but just say, ‘Let’s get some stuff going to fire up the team.’”

It also validated what the Eagles’ coaching staff had seen in Covey, a training camp sensation who parlayed his newfound circumstances into an unlikely roster spot at the dawn of September.

For perhaps the first time all season, it appears as though the game slowed down for the 25-year-old.

To see the fruits of his labor manifested on gameday, the affable Covey worked diligently in practice to be a prominent part of the solution to a largely turbulent third phase.

Sure, the blocking in front of him also improved, and the unit’s overall intensity levels were noticably revved up.

But much of the credit deservedly belonged to Covey, who demonstrated a patience, vision, and assertiveness that had been missing all season. In the face of incessant skepticism, Covey remained even keel.

“Punt returner is an interesting thing,” Covey explained. “Looking at it from the outside, you want every return to go for 20 yards. But looking at it on film, you realize, that return might have only gone for five yards, but you’re one guy away from it going for 30.

“Whereas a lot of people probably could get desperate, it’s like, ‘No, we’re close.’ Even though it doesn’t appear like it on punt returns sometimes, you could see it.”