Coming off a resounding offensive performance at home against the Packers, the Eagles (10-1) return to Lincoln Financial Field for their final home game until January, hosting a scrappy 7-4 Tennessee Titans team comfortably atop a lackluster AFC South.

A potent Tennessee rushing attack, led by the NFL’s second-leading rusher Derrick Henry, will look to break the dam that has been the Eagles run defense this season and steal a win on the road before a divisional showdown against the Jacksonville Jaguars. 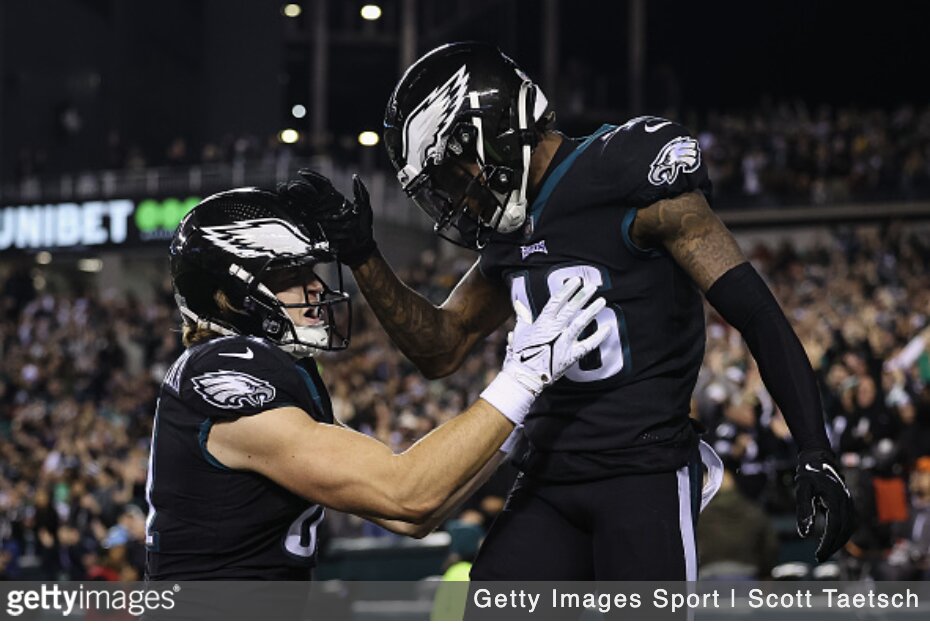 Quez Watkins has two TD catches in his past two games as he gets ready for a low-ranked Titans pass defense.

WR Quez Watkins: Watkins quickly made amends for a Week 10 fourth-quarter fumble that ultimately extinguished an Eagles comeback against the Commanders by hauling in a 22-yard touchdown catch against the Colts to pull the Eagles within three early in the fourth quarter. It was a kind of play that reiterates how integral Watkins must be in Dallas Goedert’s absence. Watkins added three catches for 35 yards — including a back-shoulder touchdown — against the Packers. While the Eagles are likely to continue their tight-end-by-committee approach, this should, in theory, create more opportunities for Watkins to flourish. Tennessee has struggled to counter opposing passing attacks all season, allowing an average of 266 passing yards per game – 31st in the NFL, behind only Minnesota. With the secondary presumably zeroing-in to stifle a potential A.J. Brown revenge, Watkins – who played a season-high 82 percent of the snaps against the Packers — will have ample space to roam free and should be well-positioned to score his third touchdown in as many weeks.

S Reed Blankenship: Prior to Week 12, Blankenship had only logged two defensive snaps all season before a C.J. Gardner-Johnson kidney injury pressed the undrafted rookie into extended action on Sunday night. The Middle Tennessee State product responded by producing his first career interception and a team-leading six tackles in 35 snaps, but he could face a stiffer test this week against the run-centric Titans, fueled by its acclaimed battering ram Derrick Henry. While the 23-year-old safety sacrifices athleticism and coverage acumen on the backend, Blankenship’s physicality and tackling prowess figures to counteract Tennessee’s smash-mouth DNA. Blankenship, primarily a box safety in college, could be called on prominently for run support as an extra defender at the line of scrimmage as the Eagles look to bottle up Henry and force the Titans into becoming one-dimensional.

WR Nick Westbrook-Ikhine: Veteran wideout Robert Woods leads Tennessee’s anemic aerial attack in targets (56), receptions (32) and receiving yards (351). First-round rookie Treylon Burks, the team’s most electric passing option, has come on of late, reeling in 11 catches for 181 yards over the past two weeks. But when the Titans needed a boost through the air, Westbrook-Ikhine delivered, as evident in his eight-catch, 119-yard, two-touchdown effort against the Broncos last month. The third-year wideout, who leads the Titans in yards per reception (19.1), also commanded six targets a week ago, snaring four for 58 yards. The Eagles are likely to sell out to eliminate Burks from impacting Tennessee’s limited passing game, forcing Tennessee to look elsewhere for production. On Sunday, however, they can ill-afford to overlook the Titans’ complementary options, especially Westbrook-Ikhine, who is presumably poised for another 6-8 targets.

DT Jeffery Simmons: One of the most enduring attributes of the Tennessee Titans is their physical, gritty, nasty brand of football, perhaps best exemplified by its take-no-prisoners mentality in the trenches. Simmons will lead a formidable Titans front onto Lincoln Financial Field on Sunday, primed to stymie a surging Eagles offense which just rolled up 516 yards of total offense – including 363 rushing yards – against a hapless Packers defense in Week 12. Simmons, a fourth-year pro who resides in the middle of an attack-style defensive front, leads the Titans in tackles for loss (10) and is second on the team in sacks (6.5). Over the past two weeks, the Eagles have allowed five sacks and seven quarterback hits, and when their revered offensive line has its bouts, it typically comes against big-bodied interior maulers with explosive get-offs. Simmons, a multifaceted defender, poses the greatest threat to thwarting the offense’s efficiency through the air and on the ground.