Derrick Henry, the No. 2 rusher in the NFL, is coming to town as two of the top run games in the NFL are set to face off.

On the latest episode of Inside The Birds, Adam Caplan and Geoff Mosher previewed the upcoming matchup between the 10-1 Philadelphia Eagles and the 7-4 Tennessee Titans. 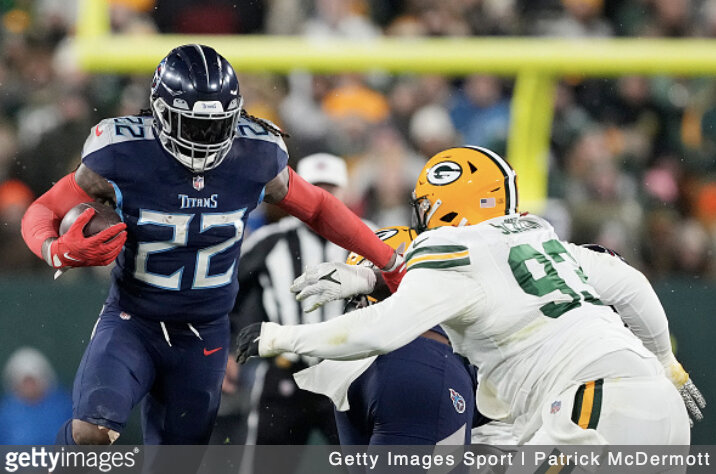 Titans RB Derrick Henry is one of the best in the league, but must overcome a struggling offensive line.

Geoff Mosher: “It sounds like he’s trending towards being able to go because he’s been able to get on the practice field a little, but I think it would be unreasonable to expect him to be able to play the 20-some-odd snaps he was playing before he got hurt.”

Adam Caplan: “He did individual [work] on Thursday and it looked good. The key when you’re coming back from a high ankle sprain is how you are the next day when it’s high intensity, when you’re in a real practice, because they only had a walkthrough on Wednesday. You see how he reacts, see how he feels, they have until Saturday at 4 p.m. Eastern [Standard Time] to make the move. There’s no rush to get him back, there shouldn’t be anyway. This is his first injury; a high ankle is a major injury. We’ll see what happens. They’ll have six defensive tackles available if he plays. You would think someone would have to be inactive.”

Mosher: “This is going to be a battle fought in the trenches. You have a really good Eagles offensive line against, depending on if (Jeffery) Simmons [plays], it’s still a really good and physical Titans defensive front.”

Caplan: “The Titans front is so good and active. They are dominant, so good against the run. They simply don’t give up 100-yard games. If Simmons and (Denico) Autry are out, that changes everything. They’re a 34 front but they change it up a little bit. Kevin Strong is a kid that they’ve been playing as their top backup.  He’s been with them for a couple of seasons, you’ll see him in there. Naquan Jones is not always active, but he’s been with them since last year. The kid Teair Tart is terrific, he’s from Philly. He’s been a great story, undrafted free agent out of Florida International, he’s a stud. But they’ll have a real problem if Simmons can’t play. If Simmons plays, they’re going to combo block the hell out of that guy. He’s so strong and gets low.”

Mosher: “We’ve seen the Eagles do this earlier in the season, when they sense that they can throw on certain players, they will target those players. I feel like the Titans corners, especially Roger McCreary out of Auburn, he’s not the fastest guy and a little on the short side. You might be able to throw on him. I do think there will be some opportunities for Jalen (Hurts) to throw the ball here.”

Caplan: “This kid is just around 5-11, but he’s not a speed guy. I’m going 11 personnel a ton in this game. The Titans have depth at corner, but they’re not fast. I want Quez (Watkins) on the field more than he normally would and I’m taking shot plays. The one thing you can do, and it’s happened occasionally to the Titans, you throw over the top because they don’t run that well, they’re just so physical. It’s not going to be easy, but take your shots.”

Mosher: “Henry has not been himself lately. In the last three games, he’s averaging under three yards per carry and he only has about 170 yards, so clearly something is going on there.”

Caplan: “They do a lot of zone cuts. You’ll see (Ryan) Tannehill under center, he’ll toss it, toss right, one cut and get upfield. The thing with Henry is get his shoulders turned. He cannot go anywhere if you get his shoulders turned, he’s not elusive like that. He’s a freight train running forward. If he gets five yards, he’s gone. He can run for 70 yards if you don’t get his legs. You can’t give him that space. As great as T.J. Edwards is going to be, Henry will run over T.J. Edwards.”

Caplan: “Dennis Daley was benched in Carolina. He’s a well-below average left tackle. This is where the rubber meets the road. The Eagles coaches know what the tape looks like. You should be able to beat him…This is a well below average offensive line, you mentioned that Henry is struggling, this is why.”

Mosher: “I think it’s going to be a fairly one-sided game. I have the Eagles winning 24-9. I don’t think the Titans are going to score a touchdown. I see them meandering up and down the field, eventually running into a bad third down, and I think the Eagles pass rush is going to kill this offensive line.”