PHILADELPHIA – Reed Blankenship held court with the media outside his locker Sunday night as a chorus of “Reed! Reed! Reed!” echoed from the defensive back’s corner of a jubilant Eagles locker room.

Across the room, wide receiver Zach Pascal added to the commotion, delivering a spirited message to his team’s unlikely hero during Blankenship’s postgame availability.

Normally, the undrafted rookie occupies his relatively barren locker stall after games without much fanfare, occasionally glancing to teammates being interviewed nearby before ultimately exiting unnoticed.

But the scene that unfolded around Blankenship’s locker following Sunday night’s 40-33 Eagles win over the Packers was unlike anything he had seen or experienced in the first 11 weeks of his pro career. 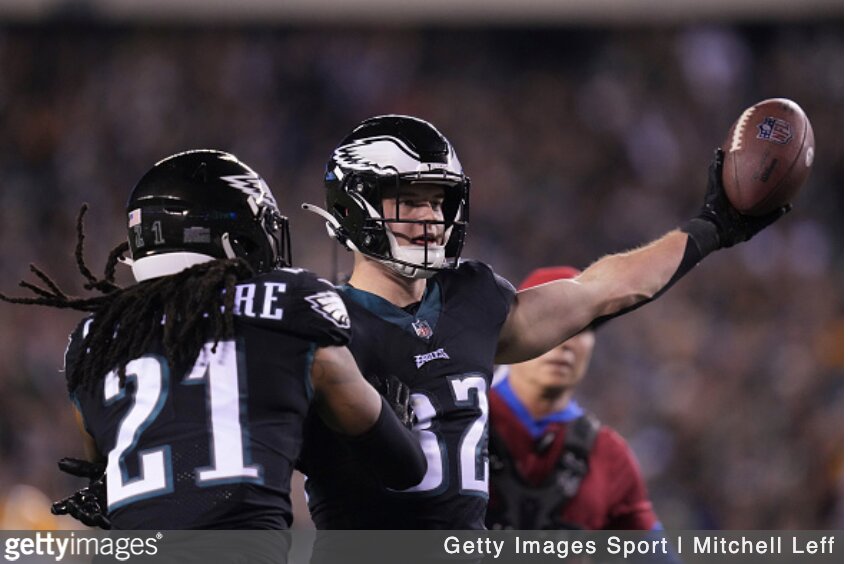 With 3 minutes, 37 seconds left before the break, safety C.J. Gardner-Johnson put a hit on Packers wide receiver Christian Watson following a 21-yard completion that drew the Packers within scoring distance.

Making matters worse, Gardner-Johnson, who leads the Eagles with five interceptions, remained down on the Lincoln Financial Field grass in apparent pain for a prolonged period before the medical cart whisked him away.

The next man up was not former fourth-round pick K’Von Wallace, but rather Blankenship, who had previously logged only two defensive snaps entering. The five-play, 37-yard drive culminated in an 11-yard touchdown strike from Aaron Rodgers to wide receiver Randall Cobb the following play, and it appeared the game had turned on its axis.

On the ensuing Packers possession, Rodgers, the league’s reigning MVP, marched the revitalized Green Bay offense to the Philadelphia 28-yard line, but momentum was drastically altered on the following play.

Just as the Packers appeared poised to reclaim the lead as Rodgers rifled a pass over the middle toward tight end Tyler Davis, an unfamiliar No. 32 broke on the ball, flashing in front of Davis to secure the interception at the 18.

Blankenship’s momentum sent him tumbling to the Philadelphia 22, where he was met by a convoy of elated teammates waiting to embrace him.

“You know, it was one of those situations that I did my job,” Blankenship said after the game. “I was a little deep in my coverage and I read A-Rod’s eyes and broke on it pretty quick.

“So, that comes with a lot of hard work and learning from the guys in front of me, like Marcus Epps, who’s been a great role model for me. I love how [Marcus] plays. It makes me feel a lot more calm when I was out there.”

Blankenship, out of Middle Tennessee State, was predominantly deployed on special teams sans for a small cameo in a dime formation last week in Indianapolis. He was quick to credit the veteran Epps for being instrumental in his development and for calming an understandably jittery rookie during his first extended action.

“[Marcus] just tries to do everything right,” Blankenship said. “And when he’s just a little bit off, he knows it immediately and he fixes it. He’s very good at communicating. Coaches can rely on him. He’s a reliable guy.

“That’s what I wanna be later on in my career – somebody they can rely on to get their job done. And if stuff hits the fan, I can be the guy they look at. So, Marcus is that guy – he will always be that guy.”

In 35 defensive snaps, the 23-year-old combined for six tackles, an interception, and a pass defended, becoming the latest example of the Eagles’ “next man up” philosophy.

One dozen games into his professional career, Blankenship has taken away an important lesson.

“You never know when your number is gonna be called,” he said. “Study like you’re a starter. Your opportunity is gonna come. The NFL is a long season. Guys can go down – unfortunately Ceedy [Gardner-Johnson] went down – and it gave me the opportunity to try and fill his spot. Ceedy is a great player, and that hurt us a lot, but I know he’s gonna rebound pretty good. I’m excited for that.”

But in the wake of picking off Rodgers for his first career milestone, what does Blankenship plan on doing with the ball?

“I’m gonna send it home to my parents,” Blankenship grinned.

Like his locker mate, Josiah Scott also emerged from the depths of the Eagles’ roster to play a crucial role for a short-handed secondary.

On a 3rd-and-4 at the Green Bay 15, Rodgers eluded an oncoming Javon Hargrave and fired a tight-window throw for his top receiver, Allan Lazard. But the football met the helmet of a diving Darius Slay, ricocheting into the waiting hands of Scott, who demonstrated masterful concentration in keeping his feet in bounds to complete the turnover.

The first interception of Scott’s career returned possession to the Eagles at the Green Bay 29. Three plays later, Miles Sanders broke a 15-yard touchdown run, giving the Eagles a 13-0 lead with just over nine minutes remaining in the opening frame.

“I see the ball was thrown not to my man and Slay had a pretty good break on it, so I thought he was actually gonna intercept it,” Scott explained. “So, I just started runnin’ to get a block or anything I can, and I see it get tipped up, and I’m like, ‘Oh, man. It’s in the air.’ So I went and got it and made a big play.”

Scott, of course, has been filling in at the nickel position in the absence of Avonte Maddox, who was placed on Injured Reserve last month with a hamstring injury hours before a Week 10 Monday night tilt against the Washington Commanders.

On the third play of that game, Commanders quarterback Taylor Heineke attempted a deep heave down the left sideline to wide receiver Curtis Samuel with Scott in tight coverage. The pass fell incomplete, but perhaps more importantly, Scott’s response made clear that he was capable of preserving the unit’s unparalleled standards.

Before his breakthrough, Scott had logged only nine defensive snaps – which came in the decisive Week 2 win over the Vikings on Monday Night Football.

Maddox’s ankle injury forced Scott into consecutive starts against the Jaguars and Cardinals, but the former’s extended absence has allowed the multifaceted Scott to settle into a role.

Despite being without one of the league’s top nickelbacks for the past few weeks, and probably without the NFL leader in interceptions for the foreseeable future, the Eagles are banking on cohesion in the secondary already forged by reserves like Scott and Blankenship,  who’ve shown to be prepared and accountable.

“It’s not too big,” Scott said of his recent adjustment. “This is my second year as a nickel in this system, so I’m pretty comfortable. And now, getting the reps throughout the year with this exact group, I’m settling pretty nice with those guys, and the communication is pretty solid for the most part.

“I’m just gonna continue to just communicate and make plays and do what I can to fill in that void.”