Facing their second loss in as many weeks, the Philadelphia Eagles for the first time this season rallied back in the fourth quarter to upend a deficit.

Trailing by six with less than five minutes to go against the Indianapolis Colts at Lucas Oil Stadium, Eagles quarterback Jalen Hurts directed the offense on an 11-play, 75-yard scoring drive capped by Hurts’ 7-yard touchdown run with 1:20 to play.

Brandon Graham’s seven-yard sack of Colts quarterback Matt Ryan with 39 seconds to play and an ensuing false start ended any chance for an Indianapolis comeback as the Eagles escaped with the 17-6 win.

The Eagles bounced back from their first loss of the season, a 32-21 loss to the Washington Commanders, to avoid their first losing streak. A loss by the New York Giants to the Detroit Lions allowed the Eagles to take a tw0-game lead over the Giants and Dallas Cowboys (7-3) for first place in the NFC East. 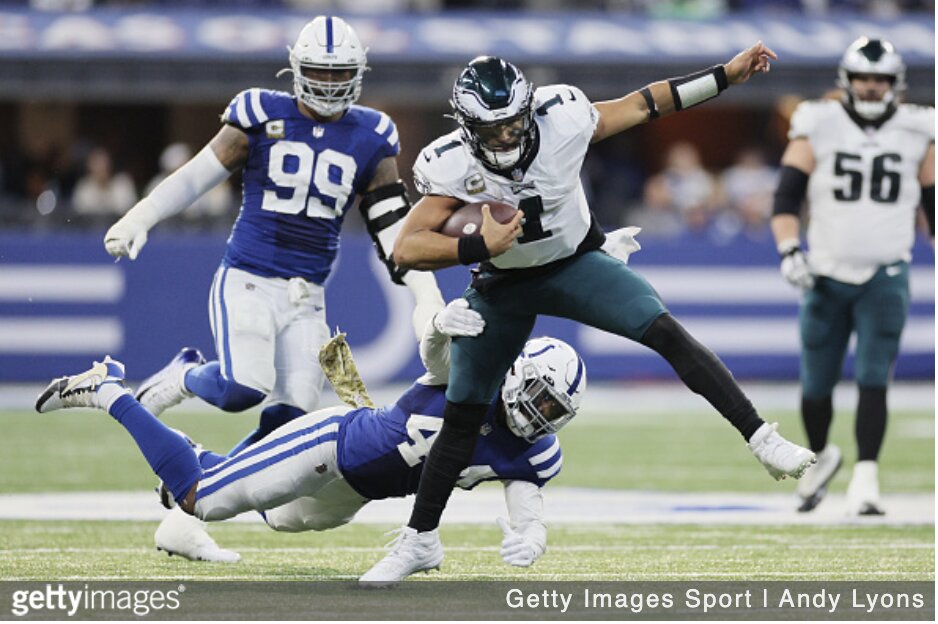 Jalen Hurts threw a touchdown and ran for another as the Eagles escaped with a 17-16 road win vs. Colts.

1. Major bounce-back by the run defense, which held All-Pro running back Jonathan Taylor to just 84 rushing yards, much of which came on the Colts’ opening drive. Defensive coordinator Jonathan Gannon made some adjustments, including playing a safety in the box and run-blitzing to give his team enough bodies to swarm the Indianapolis run game.

2. Amazingly, both street free-agents, Linval Joseph and Ndamukong Suh, played early in the game, as the Eagles were desperate to get better run personnel on the field. Their presence helped make enough of a difference in run defense and each finished with a half-sack.

3. Fletcher Cox played a much better game. He fought through double-teams, he battled, and rarely was he driven back. All of which shows that, despite some issues the team has with scheme matching personnel, Cox can still be more effective in run defense that he had been in the past two games. If the Suh signing was meant to send a message, Cox received it.

4. While the run defense appeared to be fixed, for at least one game, the offense might now be in need of some sprucing up as the Eagles adjust to life without Dallas Goedert for at least three more games. The Eagles got one catch for seven yards from Jack Stoll and lacked much of an intermediary pass game. The offensive staff will have to get creative going forward to get more from the offense.

5. It appeared the replacement for Goedert’s production, at least for this game, was the return of Jalen Hurts as a runner. Hurts’ 16 carries were most since Week 4 and tied for second-most on the season. With a game-high 88 rushing yards, he actually out-rushed Taylor. His 5.4 yards per run was highest this season, far eclipsing his 3.7 average for the year. It was a nice boost for the offense, but the coaches don’t want Hurts running 18 times.

6. Hurts and the Eagles will have to re-examine their RPO attack without Goedert also. The Colts maintained discipline on the back side and bottled up the Eagles’ run game. Miles Sanders, Boston Scott and Kenneth Gainwell combined for just 55 yards on 17 carries, just over 3 yards per carry. The Colts took away the Eagles’ bread-and-butter running game, which allowed them to be in the game despite very spotty play from Matt Ryan and the rushing attack.

7. Haason Reddick’s sack of Ryan in the fourth quarter was the most important play of the game. The Eagles had just turned the ball over on A.J. Brown’s fumble and the Colts were leading 13-10. If the Colts get a touchdown there, a 20-10 lead with less than five minutes to play would’ve done in the Eagles, who would have needed two scores to win. They held the Colts to a field goal instead.

8. We discussed potentially getting running backs more involved in the Eagles’ pass game to help fill Goedert’s void. It’s not exactly how we envisioned, but the most significant offensive play was probably the pass interference Miles Sanders drew on the game-winning Eagles drive. Instead of a failed third down and punt, the Eagles got 39 penalty yards on the play, setting up an eventual Hurts rushing touchdown.

9. The Eagles have work to do going forward. Defensively, they were much better but still got chewed up in run defense on the game-opening drive, and Sunday night they’ll play a way better quarterback in Aaron Rodgers. Offensively, they were very erratic and need to find their identity again while Goedert is shelved.

10. It’s gonna be tough for the Eagles to lose the NFC East now. They’ve got a two-game lead over the Giants and Cowboys, and they’ve already beaten Dallas. They still have both games left against the Giants, so even if they manage a split against New York, they’ll probably be in good shape.