As the Eagles wrap up an abbreviated slate of organized team activities (OTAs) Wednesday, attention shifts to determining how the team’s roster might look by summer’s end.

To that end, I’ve put together my first 53-man roster projection of the offseason: 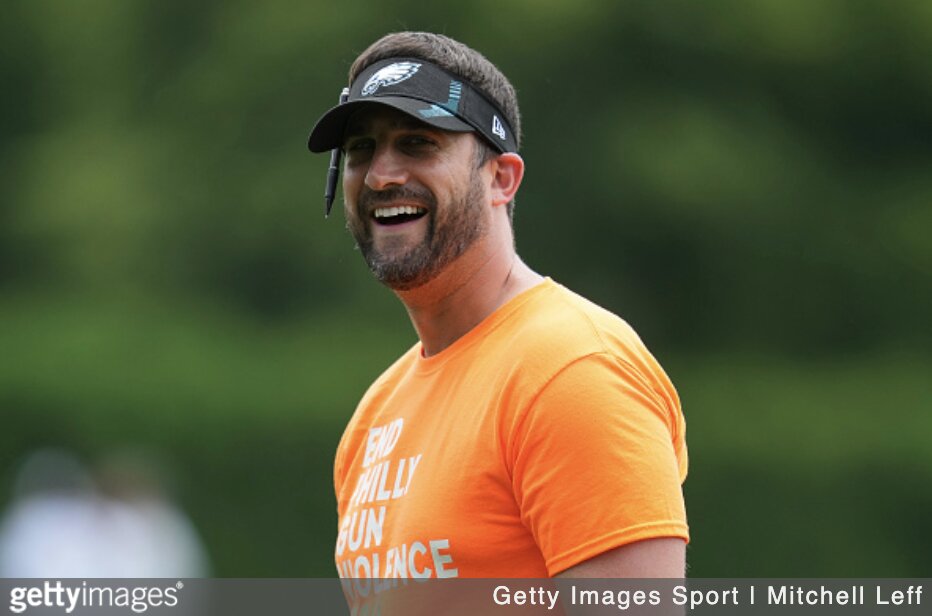 Nick Sirianni is looking to build off his 9-8 campaign as a rookie head coach.

Minshew provides insurance behind Hurts for another season while Strong, this year’s crown jewel of undrafted free agents, outduels 25-year-old Reid Sinnett to secure the No. 3 quarterback spot.

If Strong remains healthy and performs to standard, perhaps he becomes the team’s top backup by 2023.

While this group is relatively solid, I view it as a trio of situational ball carriers that lacks a downhill punch, which leads me to believe they’ll look elsewhere to add to the room at some point.

Brown’s addition completely transforms what was once a lackluster passing game, while Pascal provides, size, experience, and toughness. The former Colt will likely be a situational contributor, but he’ll have a opportunity, albeit slim, to challenge Watkins for the No. 3 role.

The Eagles will have an interesting decision to make on Reagor, but don’t expect them just to give him away for the sake of wiping the slate clean. While Reagor likely slots in as the team’s fifth receiver, the 2020 first-round pick possesses explosive traits worth holding onto. Also, assessing the roster, Reagor is still likely the team’s best option returning punts — even though 25-year-old rookie Britain Covey appears primed to be this year’s training camp darling.

Options beyond Dallas Goedert are rather uninspiring, though Calcaterra offers some upside. This is one position the Eagles must actively look to upgrade — or perhaps Richard Rodgers proves he still has some gas in the tank and defies logic once again.

Like Reagor, Dillard also faces the chance of being dealt at some point. Given the extensive injury woes that have plagued the Eagles’ offensive line, Dillard is more valuable than any late-round pick offered in exchange.

Anderson usurps Sua Opeta as a reserve interior player. He was plucked off the Bills’ practice squad early last season only to be stashed as a weekly inactive for much of last season.

The thought here is that nearly a full season of working with renowned offensive line coach Jeff Stoutland should have him firing off the ball and playing faster. Toth hangs on due to his positional versatility, while also doubling as insurance for the oft-injured Jack Driscoll and a potential Dillard deal.

Not much to say about this group other than Barnett, albeit unpopular, was a shrewd re-signing for the Eagles. Valuable No. 3 edge rusher to supplement Graham and Sweat, someone with 45 starts on his resume.

The top four hardly require an explanation. However, given the age of Cox and Hargrave – and banking on progression — I have Tuipulotu making the team for a second consecutive year. Assuming the 2021 sixth-round pick developed his play strength and refined his skill set, him helping form the trio of Davis, Williams, and Tuipulotu would conceivably give the Eagles a talented trio of interior linemen to grow with.

The top four stacked LB jobs appear to be locks. The most intriguing player to me — initially, at least — is White. I’m interested to see how defensive coordinator Jonathan Gannon uses White, and if the 26-year-old former Charger can build off of last season’s breakout campaign.

Bradley’s special teams prowess should keep him around, although I wouldn’t be shocked if the team pursues someone with a higher ceiling on the waiver wire.

Slay, Bradberry, and Maddox are etched in stone, while McPhearson showed enough on special teams last season, is cost effective, and offers positionality versatility. Gowan sticks due to his intangibles and projected upside. The Central Florida product could feasibly push McPearson in camp to become the team’s top backup at outside corner.

Harris and Epps give the Eagles a serviceable tandem, while Chachere can serve as a competent fourth safety while doubling as a special teams ace.

The concern here is at the No. 3 spot, where Wallace is more of a beneficiary of circumstance rather than someone who earned a promotion. I’d expect the Eagles to scan the waiver wire for a suitable upgrade.

– Andrew DiCecco (@ADiCeccoNFL) is a Staff Reporter/Content Producer for InsideTheBirds.com.
Listen to the latest “Inside The Birds” podcast featuring Geoff Mosher and Adam Caplan: