PHILADELPHIA – Undeterred by the Astros’ resounding victory in the World Series on Saturday, fans flooded the lots surrounding Lincoln Financial Field to welcome the Eagles back from their bye week ahead of an early afternoon clash with the cross-state rival Pittsburgh Steelers.

Wide receiver A.J. Brown fueled the Eagles’ offensive onslaught, with six receptions for 156 yards and three first-half touchdowns, as the Eagles cruised to a 35-13 victory and 7-0 start – a feat last accomplished by the 2004 Super Bowl team.

Following the week-long lull, a surgical Eagles offense compiled three first-half touchdowns while coordinator Jonathan Gannon’s fast-flowing defense held the Steelers to 129 total net yards at the half – including 1-for-7 on third down.

Opting to defer to the second half at the coin toss, a scorching Eagles offense opened the third by marching on a five-play, 75-yard scoring drive that culminated in a 34-yard touchdown pass from Jalen Hurts to wide receiver Zach Pascal – Pascal’s first as an Eagle and Hurts’ fourth of the afternoon – keeping their foot on the gas throughout the second act for the first time this season.

The ensuing Steelers’ possessions ended in a strip-sack courtesy of defensive tackle Javon Hargrave – in which the Eagles parlayed into an 11-yard Miles Sanders touchdown run – a punt, and a C.J. Gardner-Johnson interception, his third in two games.

Quarterback Jalen Hurts completed 19-of-28 pass attempts for 285 yards and four touchdowns before ultimately giving way to Gardner Minshew to close out the blowout. 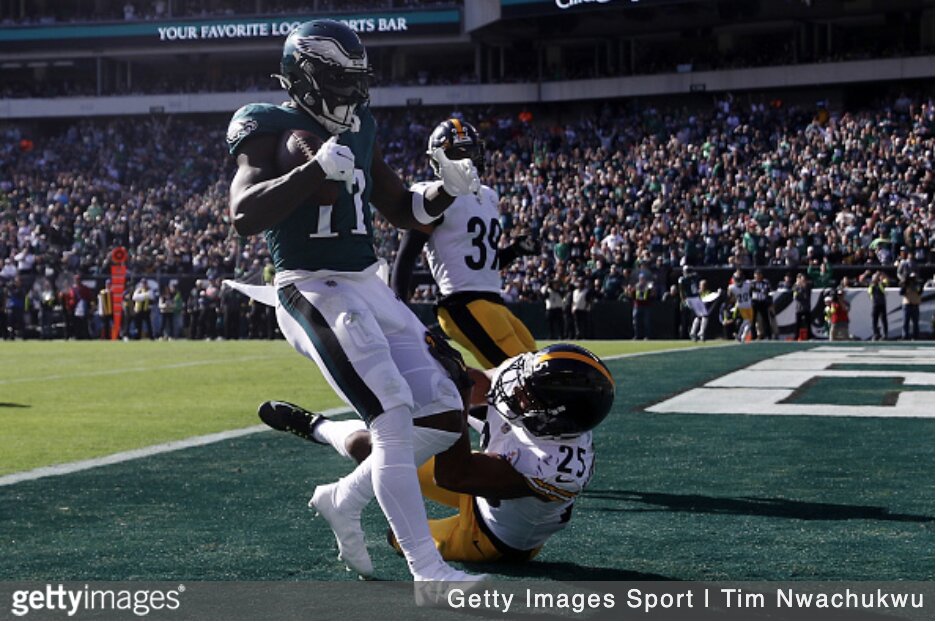 1.) The Eagles exhibited little rust on its opening possessions, limiting Pittsburgh to minus-7 yards on its initial drive and then marching on a nine-play, 68-yard scoring drive which culminated in a 39-yard strike from Jalen Hurts to wide receiver A.J. Brown. The first offensive series, which included a 4th-and-2 conversion, featured a heavy dose of the quick passing game, which set up the deep shot to Brown.

2.) Perhaps it goes without saying given the personnel upgrades, but the Eagles are noticeably faster closing on the perimeter. This was evident on the Steelers’ second drive, when Avonte Maddox swarmed to bring down wide receiver Steven Sims on a screen and linebacker Kyzir White held tight end Zach Gentry to a 2-yard pickup on a short dump off to the right. It’s easy to overlook amid a perfect season, but the Eagles addressed their glaring speed deficiency in spades.

3.) It almost felt as though the Steelers were paying homage to the Eagles on their second possession, executing a clock-draining, 13-play, 75 yard drive that covered 7:26. Though aided by a pair of Philadelphia penalties, the Steelers drive was catalyzed by a 12-yard Jalen Samuels run up the middle, and a 21-yard Pat Freiermuth reception and 11-yard Kenny Pickett scramble. A 1-yard touchdown pass from wide receiver Chase Claypool to fullback Derek Watt capped the drive.

4.) The Jalen Hurts-A.J. Brown connection returned with a vengeance. The duo’s budding chemistry is apparent, with Brown corralling six receptions for 156 yards and three touchdowns, but the trust that the two have in each other manifested in three first half touchdowns. On the 39-yard, 27-yard, and 29-yard touchdown strikes, Hurts lofted perfectly placed passes that only Brown could come down with. Brown’s physicality and attack-style mentality at the catch-point is a sight to behold.

5.) Special teams continue to be one of the handful of blemishes that could hinder the Eagles down the stretch. The glaring deficiencies that perpetuate include blocking in the return game, coverage woes, and, on Sunday, an untimely first-half penalty and were victimized by a fake punt for the second time in three games. Punter Arryn Siposs registered a pedestrian 45.8 average on four punts, with one landing inside the 20-yard line. As the trade deadline approaches, the Eagles should consider investing in either a return or coverage specialist before it inevitably becomes costly. The Steelers became the second team to get a first down on a fake punt against the Eagles.

6.) Aside from the 59-yard touchdown to Quez Watkins in Week 2 against the Vikings, the shot plays had been noticeably absent from the Eagles’ offensive repertoire through six games. Perhaps it was a meeting of the minds during the bye week that influenced the downfield resurgence, but the Eagles unlocked a key element against the Steelers, indubitably putting the NFL on notice.

7.) While long overdue, the Eagles offense got off to a fast start after the break, capping a 5-play, 75-yard drive with a 34-yard touchdown toss from Hurts to wide receiver Zach Pascal. The sailing wasn’t as smooth on the other side of the ball, however, as the Steelers marched on a 15-play, 64-yard that drained 6:58 of clock on its opening possession of the second-half but could only muster a Nick Sciba field goal. The Eagles found the end zone twice in the second quarter despite losing in time of possession: 34:18-25:42.

8.) It was nice to see a talent-laden – and well-compensated – Eagles pass-rush contingent get home against a porous Steelers’ offensive line.  Javon Hargrave (two sacks), Haason Reddick, Milton Williams, C.J. Gardner-Johnson, and Marlon Tuipulotu each notched a sack against rookie Kenny Pickett. Defensive end Robert Quinn, acquired in a trade with the Chicago Bears last week, made his Eagles debut and saw a handful of snaps in rotational duty.

9.) A lot of penalties in this one. The Steelers were tagged with nine infractions (60 yards), while the Eagles committed eight penalties (60 yards). There weren’t many negative talking points to speak of on Sunday, but the penalties could be something worth monitoring moving forward.

10.) Hurts continues to evolve as a passer and his growing comfortability within the system is evident. All told, Hurts completed 19-of-28 pass attempts for 285 yards and four touchdowns, accruing a 140.6 QB rating. I thought he conveyed poise in the pocket, delivering the ball with touch and accuracy, while trusting his playmakers and putting them in position to be successful. Hurts’ performance against the Steelers marked a significant step forward in his development. 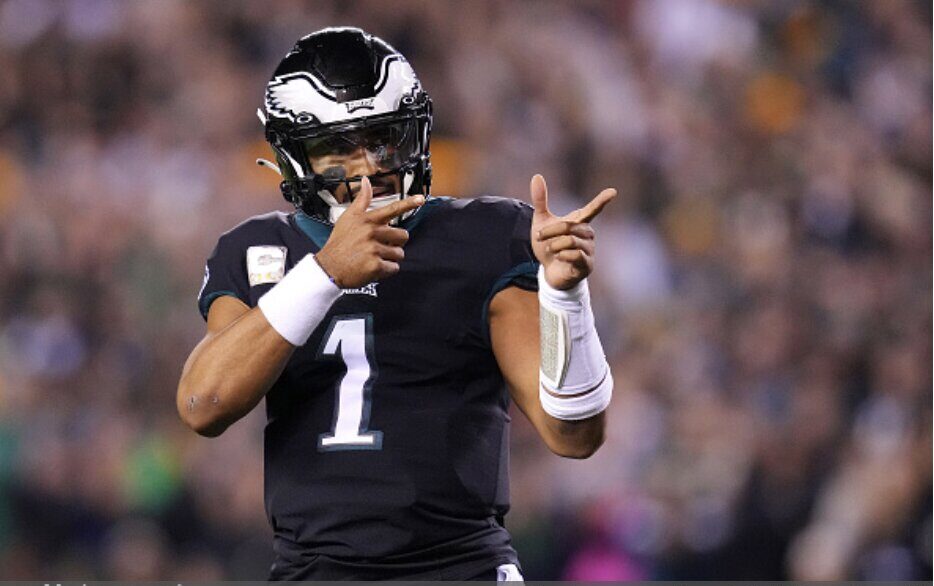 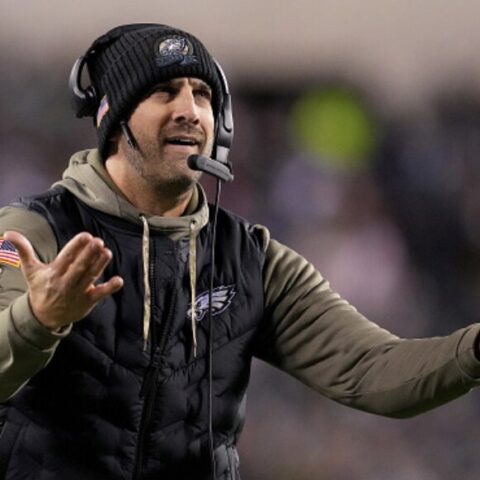 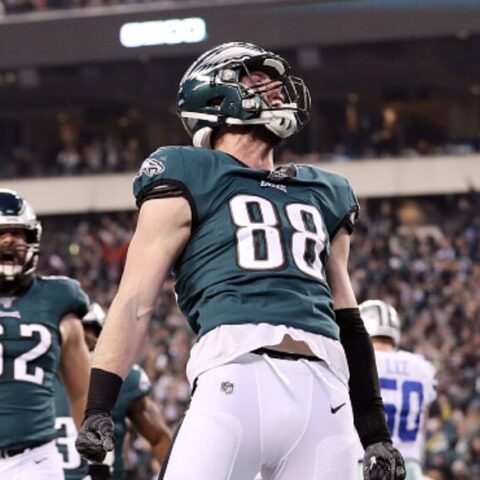 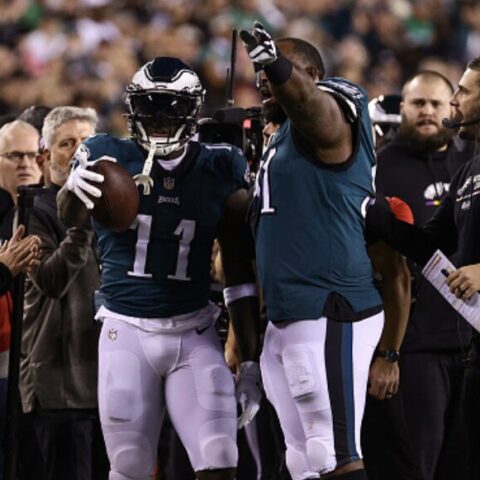