Coming off the bye week, the Eagles (6-0) return to Lincoln Financial Field on Sunday to host the Pittsburgh Steelers (2-5) at 1 p.m. in the battle of the Keystone State.

Despite a 16-10 victory over the upstart Dolphins in prime time last week, the Steelers currently sit at the bottom of the AFC North.

If intent on upending the undefeated Eagles at home, Pittsburgh will need to control the clock with running back Najee Harris and avoid costly turnovers.

The Eagles, who have won nine consecutive home games against the Steelers dating back to 1965, will look to pick up where they left off before the week-long lull and begin 7-0 for the first time since 2004.

Let’s take a look at four players poised to make an impact on Sunday afternoon: 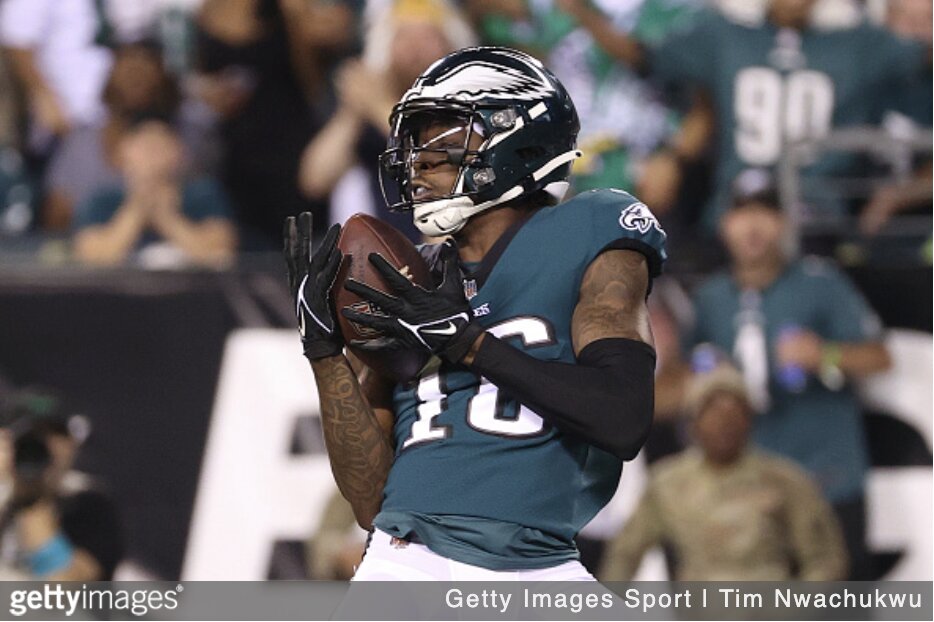 WR Quez Watkins can give the Eagles more vertical threat in their offense, if they unlock him.

WR Quez Watkins: Many – myself included – expected Watkins to be the beneficiary of added attention devoted to slowing fellow receivers A.J. Brown and DeVonta Smith, and tight end Dallas Goedert. However, Watkins has been a virtual non-entity, catching just four receptions for 19 yards (seven targets) since collecting a pair of receptions for 69 yards and a touchdown in the Week 2 dismantling of the Vikings on Monday Night Football. Coming out of the bye — facing a generous Steelers pass defense allowing 275.4 air yards per game – I suspect the Eagles will have a plan to get their fleet-footed third-year receiver back on track.

CB James Bradberry: Perhaps the team’s best free-agent signing of the offseason, Bradberry has returned to form following a down year – and subsequent jettisoning by the Giants – to perform at Pro Bowl level. The 29-year-old is tied for third in the NFL in passes defended (9) and 12th in interceptions (2), but it’s been his physicality, high-level football intelligence, and cohesiveness with star cornerback Darius Slay that has propelled the Eagles’ secondary to among the NFL’s elite. Given his length and physicality, Bradberry should draw the assignment of shadowing the Steelers leading receiver, George Pickens.

WR George Pickens: The über-physical, big-bodied Pickens has turned some heads after a slow start, snaring 21 receptions for 273 yards and a touchdown (28 targets) over the past four weeks. The 6-foot-3, 200-pound wideout, whom I assigned a first-round grade ahead of the 2022 NFL Draft, boasts an incredibly wide catch radius, vice-grip hands and aggressiveness at the catch-point. He also has rare body control. The 21-year-old often wins at the line of scrimmage, using his play strength and explosiveness to his advantage. With the Steelers presumably trailing in this one, the game script could necessitate a heavy dose of Pickens in the second half.

ROLB Alex Highsmith: Primarily rushing from the right side of the defense, Highsmith will see plenty of Eagles stalwart left tackle Jordan Mailata on Sunday. The third-year edge rusher leads the Steelers in sacks (6.5), quarterback hits (9), and forced fumbles (2), showcasing a lightning-quick get-off, along with violent, active hands, a broad arsenal of pass-rush moves at his disposal – including an effective inside spin – and fluidity when working in space. The 25-year-old has rapidly become one of the league’s most dominant pass rushers – his sack total currently qualifies as fourth-most in the NFL – and if the Eagles unveil a pass-happy blueprint early, it will afford Highsmith ample opportunities to affect the outcome.