‘Hard To Argue With That’

The Philadelphia Eagles remain undefeated after a 26-17 victory over the division rival Dallas Cowboys in a “Sunday Night Football” matchup that saw highs and lows from all three units. 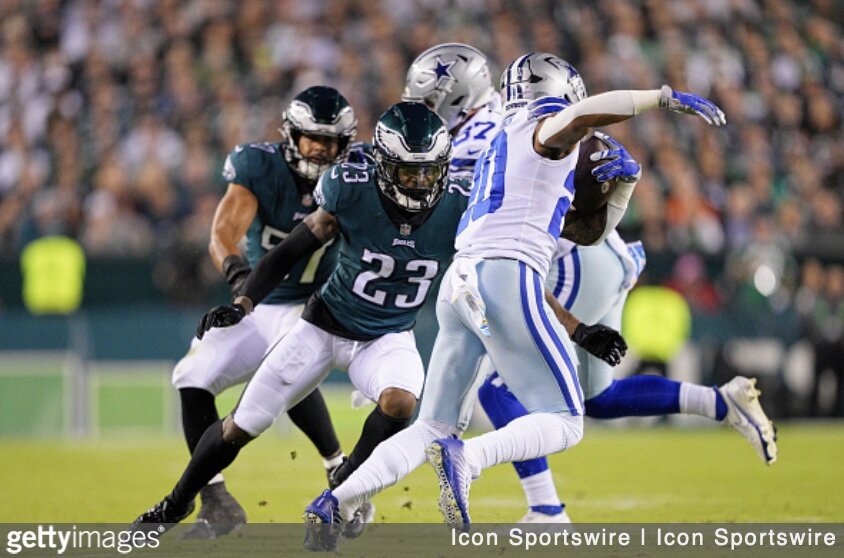 Adam Caplan: “I thought their offense was inconsistent after the great second quarter…It’s another game where they left points on the field. I think (Jalen) Hurts missed some plays, I thought he could have stepped up in the pocket. I thought the passing game was a little bit underwhelming.

Geoff Mosher: “I sort of felt that way early on, but then I had to remind myself that Dallas did come in with the third-best defense in the league and they had only allowed 20 points in the last two weeks…If you think about their second possession, it was 3rd-and-eight, and Jalen had a chance to hit A.J. Brown on the left side. He rushed the throw a little bit, I don’t think he was under duress. That was an opportunity to move the sticks. Finally, on the third drive when they scored, you saw them pick up the pace, maybe not so much from a no-huddle, but you saw them do a quick snap.”

Tra Thomas: “Whenever you sit there and you talk about a good defensive front, you know they have a good secondary…These guys have some sticky corners out there, that can create some issues over there. When you look at that first series, we wanted to come out there and puff our chest out like we’re not scared of you Dallas defensive front, and we end up running five plays and we’re out of there. I think once you started mixing that run game into it, that’s when we’re at our best. I think that when Lane Johnson went down with that concussion, that took a lot of air out of the offense.”

Mosher: “I think asking (Jack) Driscoll to go from right (tackle) to left to right, and all of the footwork and technique involved and then to face this defensive front, is very difficult to do.”

Thomas: “What [the Cowboys] were doing was just going five down and they were going to make everyone block head on and cut loose. We had a couple of problems out there.”

Caplan: “He hurt his hand; you saw him kind of flexing it. He may have got it taped up, came back. We’ve heard he’s had a steady progression because remember, his training camp is the regular season, he had no training camp or preseason with the Eagles. He’s learning on the run and getting better. I love how he came up and he saw where the ball was going, Cooper Rush telegraphed it, he came way back from the secondary and got that second pick.”

Thomas: “They were playing with a lot of energy. They were playing up there, controlling those receivers, staying in front of them, getting some deflections, you get a couple of turnovers, that’s what you want.”

Caplan: “They had their lull. The pass defense struggled at one point in the third and fourth quarter. They gave up some plays. It’s always tough, they were up 20-0. You could see they were giving up some room. We’ll find out what the blitz numbers were, it didn’t seem like they were blitzing a lot. Twelve pass breakups, three picks, it’s hard to argue with that, but I also would have liked to see more pressure.”

Mosher: “It seems like Dallas decided that when they saw that five-man front, they were going to try to attack the edges. They were going to do a lot of play action, bootlegs, rollouts, sometimes they would go spread and just throw real quick. When the Eagles went to four down fronts was when [Dallas] ran. When you only have a four-man front, then you can get those double teams going. When the Eagles are in a four-man front, they’ve been run on this year. That seemed to be Dallas’ strategy there: When they show five, let’s hit them with a short pass around the edges. When they show four, let’s get them right there with (Tony) Pollard and (Ezekiel) Elliot.

Thomas: “When you get your combination blocks, you can run inside zones right up the middle of it, and then when you get those five downs, when you have big Jordan (Davis) standing in the middle, you want to get away from him, stay on the outsides of it.”

Caplan: “Punt return coverage was terrible. If you’re giving up 12 yards a punt over three, that’s bad…The positives: (Arryn) Sipos was good, he had a decent night. (Britain) Covey had a very explosive punt return for 14 yards. I love that he was decisive, went right for the middle, a little wiggle, got 14 yards.”