‘Meat On The Bone’

ITB: Birds Left Plays On Field In Win Vs. Cards

The Philadelphia Eagles are 5-0 after a 20-17 victory over the Arizona Cardinals.

For the first time this year, the team found itself in survival mode because of an uneven performance and with the game coming down to the final minute.

On the Inside The Birds Week 4 Postgame Show, Adam Caplan and Geoff Mosher were joined by Eagles Hall of Fame offensive tackle Tra Thomas to break down the team’s latest win. 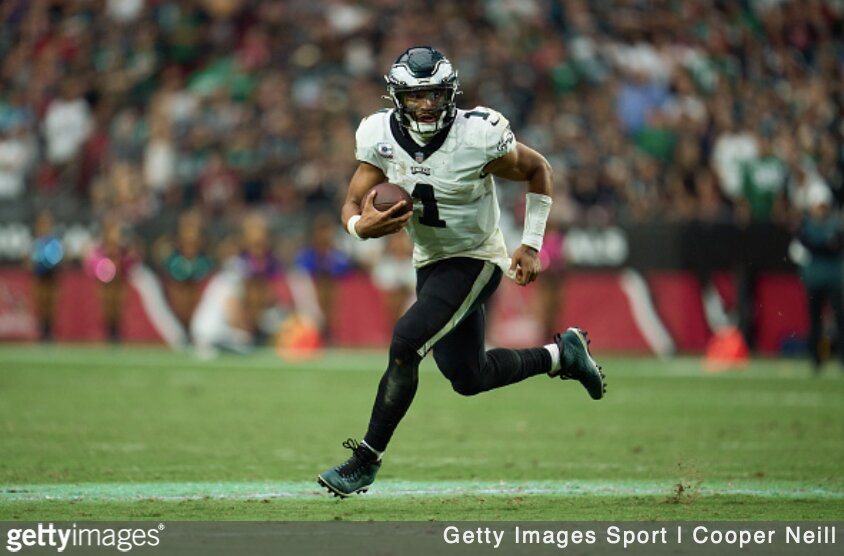 Jalen Hurts made the throws when it mattered the most in the 20-17 win over the Arizona Cardinals.

Geoff Mosher: “What stood out to me is for the first time this year, the Eagles did not have a very dominant running game. I know offensive linemen were in and out a little bit, but not as much as a physically punishing running game as we’ve seen in the past. That seemed to change their offensive complexion a little bit.”

Adam Caplan: “The Cardinals’ blitz really got to them. Part of it is obviously those missing linemen. That’s going to hurt them. Plays were there to be made, but I don’t think (Jalen) Hurts could see it, because the blitz got to him. The pressure made him move.”

Tra Thomas: “We kept going to the screen game a little too much in this game plan. What happened to A.J. Brown? I don’t see any shot plays going downfield. One of the things they’re going to have to figure out is with (Kenny) Gainwell in protection. One of the sacks that was given up last week was because he couldn’t get to the corner blitz because they came up with a Double A-Gap blitz and he gets tied up with the linemen. You saw it come again today with the Cardinals.  (Jack) Driscoll did a fire zone read outside, but then you just saw Gainwell get a little confused. That’s something they’re going to have to work on when he’s in the game that he has an understanding of how he needs to handle these protections.”

Mosher: “I do want to bring to light one good throw by Jalen Hurts against the blitz that I thought meant everything in the game. The last drive, 3rd-and-seven, they really brought it to him. He did an excellent job of holding onto it just as long as he could, and then [he threw] to Dallas Goedert on a deep crosser there, first down, and they wind up kicking the field goal. That was a tremendous play by Jalen Hurts.”

Caplan: “I know he didn’t have a great game and this is his third game without a touchdown pass, even though he had two running. In fact, he only has four touchdown passes and six running. The fact of the matter is when he had to make a throw, he did it. Jalen always says, ‘There was a lot of meat left on the bone,’ there was, because when you’re bringing the house like (Arizona) did, guys are going to be open. I’m curious what the All-22 is going to look like, because (Arizona) was playing such off coverage, particularly early in the game, and they took advantage of it. I don’t know what the heck happened after that.”

Mosher: “I think Jonathan Gannon showed a lot of respect to the rare speed that he is seeing. The Eagles have faced good receivers this year, but this might be the fastest, speediest tandem when you take Marquise Brown and Rondale Moore. Those guys can beat you over the top if you let them. Maybe he was afraid to let get up on them with the way Kyler Murray can extend plays outside of the pocket.”

Thomas: “Coverage dictates sacks. Every sack takes at least 2-2.3 seconds to get there unless there’s a blitz that came through clean. If you just allow the QB to just dink the ball out of there at 1.8 [seconds], 1.6, that’s really quick. As a secondary, you have to get up there and challenge those receivers.”

Caplan: “Britain Covey had a 15-yarder which was good, then his ball security, which was not good. If you’re trying to be perfect, you look at every issue you have. Special teams returner has been a problem for years. You have to look at that.”