The undefeated Philadelphia Eagles are headed to Arizona to take on the 2-2 Cardinals. Likely to be missing multiple key players due to injury, Philadelphia can still capitalize on major matchup advantages.

On the latest edition of the Inside The Birds podcast, Adam Caplan and Geoff Mosher gave the latest on Philadelphia’s injuries and preview Sunday’s matchup. 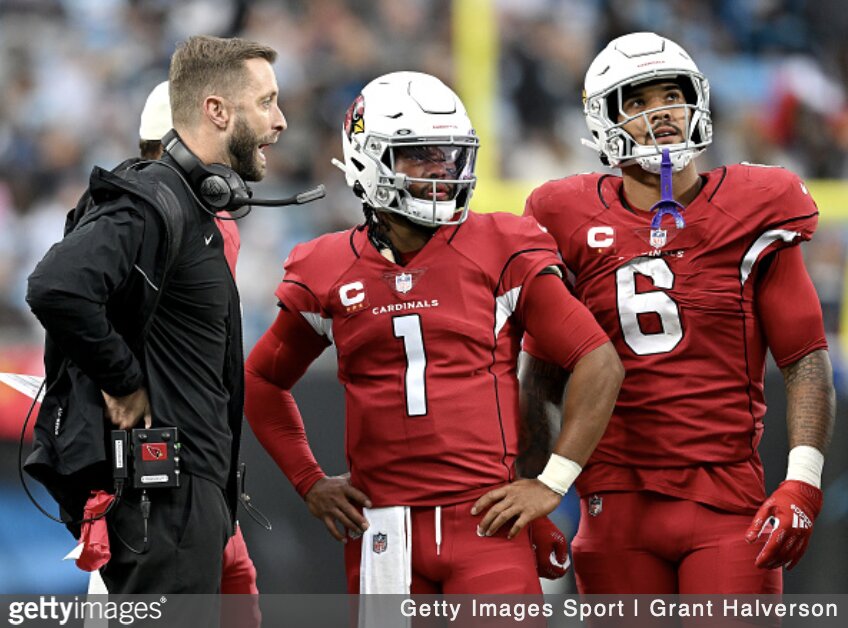 With QB Kyler Murray running less and the lack of depth at wide receiver, the Arizona Cardinals offense is not quite connecting.

Adam Caplan: “He’s not going to play. We’re not saying it’s a four-to-six-week injury, but it’s definitely in play for him not to play against Dallas [next week]. It’s going to come down to treatment and how he feels.”

Geoff Mosher: “I’d be shocked at this point if he plays on Sunday. We talked about how it’s a pain tolerance issue, my understanding is that there’s still the pain in there. It’s hard when you’re a left tackle and it’s a shoulder injury, think about how much they use their hands in punching and fighting off enormous men.”

Mosher: “He’s not running a whole lot this year. He only has 91 yards through four weeks. He’s averaging his fewest rushing yards per game. I don’t know if that’s a concerted effort on his part or just the way the game is going, but interestingly enough, it’s not a big part of their offense.”

Caplan: “He’s a big scrambler, he does things that are not planned. The thing with him is he’s so short at 5’10. What you’ll notice if you watch the All-22, if you get your hands up sometimes, he simply cannot see.”

Mosher: “Rondale Moore is an exciting player. He’s shifty, he’s hard to tackle, he’s precise with his routes. If he’s healthy, he is the type of guy on those crossing routes in the middle of the field that you have to be really sticky with your matchup zone coverage there, because he can catch the ball and turn up field quickly.”

Caplan: “He’s super explosive on a straight line, but talking to coaches about smaller players over the years, it’s hard to win when you’re not long enough on your arms.”

Caplan: “I think it’s bombs away. Tight ends absolutely annihilate this, they are second worst in the NFL covering tight ends… Let’s be realistic here. They got absolutely taken to the woodshed by (Patrick) Mahomes in Week 1. He had 360 (yards) and they called the dogs off. If the game would have been close, he would have had 600. This is an absolutely beatable defense.”

Mosher: “I don’t think that the stats sometimes really reflect what they are. They are fifth against the run, allowing only 87 yards per game, but that’s because they’re not good against the pass, so teams are just throwing the ball over them and deciding not to run. The Eagles are going to be able to have their way. I think the RPO game will be in full gear. As long as they feel comfortable with their matchups and protection, it wouldn’t surprise me if they came out just throwing.”