WRs, DBs Will Make Difference In Birds Vs. Jags

While both are coming off resounding wins, Jacksonville – an early AFC South favorite, led by a coach who won a championship in Philadelphia just five years ago – will likely be playing with some extra incentive against the NFL’s lone unbeaten team.

No matter how inclement the forecast  – steady rain is imminent – Sunday’s matchup between the two revitalized upstarts had the makings of a closely contested slugfest.

Let’s take a look at four players poised to make an impact on Sunday afternoon: 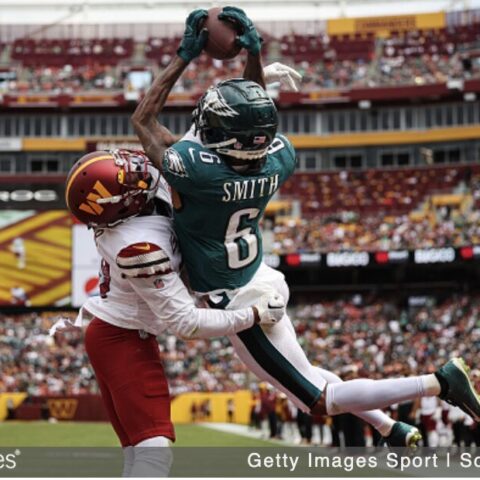 WR DeVonta Smith: Coming off a performance in which he collected a game-high eight receptions for 169 yards and a touchdown on 12 targets in a decisive Week 3 win over Washington, Smith is positioned to capitalize against a vulnerable Jaguars secondary and eclipse the 100-yard receiving barrier for consecutive weeks. Aside from emerging second-year cornerback Tyson Campbell, who struggled mightily defending Smith at the collegiate level, Jacksonville’s secondary isn’t well equipped to handle the Eagles’ “Batman” trio without a heavy dependence on a complementary pass rush. With Smith and quarterback Jalen Hurts seemingly in a groove, expect some early fireworks.

S C.J. Gardner-Johnson: Who will be called upon to fill the void at slot corner in the absence of slot cornerback Avonte Maddox (ankle)? It could conceivably be former Jaguar Josiah Scott, a reserve defensive back stashed for times like these. Also, Zech McPhearson could capably man the position in the interim. However, the most logical solution would be to move Gardner-Johnson from safety to nickel, given that whoever is assigned the task will likely see a heavy dose of Christian Kirk, the Jaguars’ leading receiver. Gardner-Johnson’s experience, short-area quickness, toughness and football intellect will presumably give him the upper hand in this scenario. Through three games, Kirk has amassed 267 receiving yards and three touchdowns. With fellow wideout Zay Jones (ankle) – who leads the Jaguars in receptions – listed as questionable, Kirk will be the focal point in the passing game.

RB James Robinson: Just over nine months since rupturing his Achilles tendon in a Week 16 loss to the New York Jets, Robinson has incredulously seized control of the Jags’ backfield, out-snapping former first-round pick Travis Etienne 44-33 and logging four more carries, on his way to a 100-yard performance against the Chargers. Robinson offers between-the-tackles and contact balance working through traffic, yet possesses enough juice to find success on outside runs. Further helping his cause, the former Illinois State standout also happens to be the superior pass protector, and as a result, appears to be Pederson’s preferred option. Given the expected elements – and Robinson’s hot start – expect anywhere between 18-to-20 carries in an effort to establish a downhill dynamic.

LB Devin Lloyd: The NFL’s Defensive Rookie of the Month, Lloyd leads all rookies in combined tackles (26) and his six passes defended are tied for tops in the NFL. Lloyd, the No. 27 overall pick in the 2022 Draft, has been an invaluable piece to first-year defensive coordinator Mike Caldwell’s attack defense. The rangy linebacker figures to see plenty of action on Sunday, whether it’s trailing tight end Dallas Goedert, tracking running back Miles Sanders out of the backfield, or shadowing quarterback Jalen Hurts. Lloyd’s palpable athleticism, fluidity, and football acumen will be put to the test early in this contest.