By Week 3 of the NFL season, most fantasy football owners have gained a general understanding of their team’s strengths and weaknesses.

While some will seek to overcorrect perceived flaws, others will hold firm in hopes of getting a return on their early round investment.

Depending on circumstance, these crucial Week 4 roster maneuvers could conceivably breathe new life into your season. 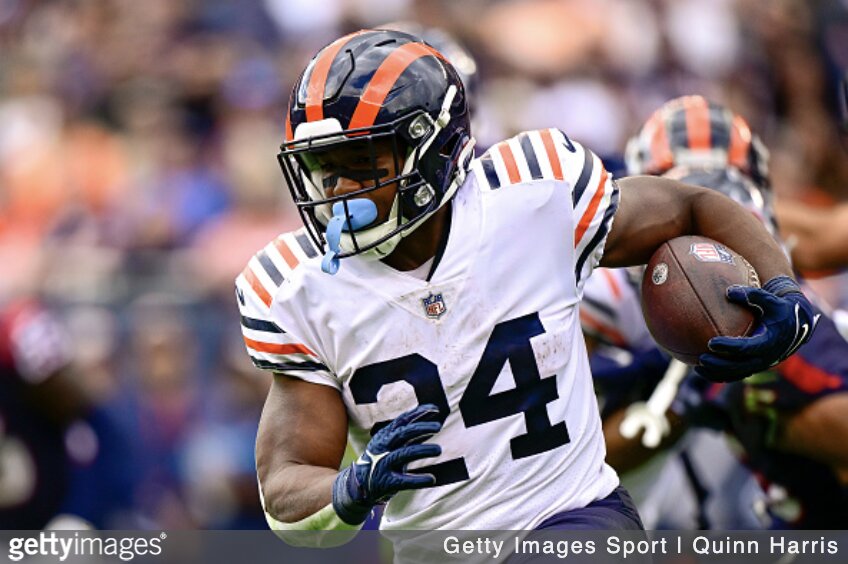 Bears RB Khalil Herbert could be the pick-me-up your fantasy team needs.

RB Khalil Herbert, Bears: David Montgomery, who left Sunday’s game in the first quarter after having his ankle rolled up on, didn’t practice Wednesday, leaving his Week 4 status uncertain. In his absence, Herbert rushed for an astounding 157 yards on 20 carries, adding a pair of touchdowns for good measure. If Montgomery can’t go, Herbert should feast against a Giants defense averaging a healthy 5.6 yards per carry to opposing ball carriers.

RB Alexander Mattison, Vikings: Depending on league size, Mattison could well have been drafted given his potential standalone value. However, if he’s available, now’s the time to get him. When Dalvin Cook (shoulder) exited the game Sunday in the third quarter, Mattison combined for 44 yards of offense and found the end zone. Monitor Cook’s status as through the weekend, but regardless, Mattison should be rostered.

WR Romeo Doubs, Packers: The Packers seemed to have found its complement to Allan Lazard in former fourth-round pick Romeo Doubs, who played 55-of-56 offensive snaps (Lazard played 56). The former Nevada standout reeled in all eight of his pass targets for 73 yards and a touchdown and assuming the No. 2 wide receiver role in Green Bay immediately gives Doubs weekly flex appeal in deeper leagues.

WR Zay Jones, Jacksonville Jaguars: While fellow pass catcher Christian Kirk has a stranglehold on the top spot in the pecking order, Jones, who played 76 percent of the snaps Sunday, is next in line. The veteran journeyman saw 11 pass targets in the 38-10 win over the Chargers, and his 10 receptions for 85 yards and a touchdown also led the team. Not sure I’d plug him in Sunday against a Philadelphia secondary that’s seemingly found its stride, but he could become a factor down the stretch.

TE Tyler Conklin, New York Jets: On the heels of a standout training camp, Conklin has quietly been on a consistent tear through three games, averaging eight targets and accumulating an 18-140-1 stat line. Conklin offers a safe floor and should continue to see volume on a team projected to perpetually play from behind.

Keep an eye on…

WR Mack Hollins, Raiders: In three games, Hollins eclipsed his previous total for most receiving yards in a season (240). The 29-year-old, who signed with the Raiders back in March, incredulously ranks second on the Raiders in targets (20) and sits behind only the cerebral Davante Adams in targets, receptions and receiving yards. In the past two weeks, Hollins has yielded 13 receptions for 224 yards and a touchdown. While his track record indicates his sudden emergence could well be a fluke, Hollins should be on the radars of fantasy enthusiasts everywhere.

WR DeVante Parker, Patriots: Parker saw only a combined four pass targets through the first two weeks before his 5-catch, 156-yard (10 targets) blowup spot against the Ravens. Was that an aberration? Will the veteran be able to build on that performance with Brian Hoyer under center? Is there room for Parker to become a viable fantasy asset given New England’s two-headed rushing attack and reliable target monster Jakobi Meyers? Week 4 should provide further clarity.

RB Miles Sanders, Eagles: Prior to last week, Sanders had been on a tear, decisively identifying running lanes and surging downhill at every opportunity. In what I expect to be a relatively close affair with the Jacksonville Jaguars, I suspect Sanders to be a prominent fixture in this week’s game plan.

RB Dameon Pierce, Texans: Pierce finally saw the volume many anticipated when he was named the starter, carrying 20 times for 80 yards and a touchdown, catching a pair of passes for 21 yards, and appearing to turn the corner. The rookie running back should universally be an RB2 this week against a reeling Chargers defense.

RB Rashaad Penny, Seahawks: Penny is the de facto workhorse in a run-dominant offense squaring off against a Lions team which ranks dead last in the NFL against running backs. Penny needs to be in your flex.

WR Drake London, Falcons: London has found the end zone in consecutive weeks and appears to be developing a nice rapport with quarterback Marcus Mariota. Given his usage and projected game script, the 2022 first-round pick is approaching WR2 status.

WR Chris Olave, Saints: Olave has commanded 26 pass targets over the past two weeks and is coming off a 9-catch, 147-yard performance against the Panthers. This week, Olave draws a vulnerable Vikings pass defense.