Leader Of The Sacks

Shortly after the Eagles had routed the Minnesota Vikings 24-7 on Monday Night Football, Brandon Graham eloquently spoke about a seemingly revived Eagles pass rush, a unit that had only registered a pair of sacks and seven quarterback hits on Kirk Cousins after being largely neutralized in Detroit a week before.

“Once one happens, I feel like they come in bunches,” Graham told ITB after the game.

“I felt like we just had to make sure we just kept comin’, because we knew the ball was gonna come out. I mean, they respect us just as much as we respect them. We huntin’ just as much and they’re tryin’ to stop us from huntin’.

“So, I just think as a collective, we all just kept each other in the game. When we got frustrated sometimes, it’s like, ‘Nah, don’t worry about it. Next play…’ And I feel like everybody did that. Everybody just kept comin’.”

And keep coming they did.

In Sunday’s 24-8 Eagles win over the Washington Commanders at FedEx Field, Graham’s proclamation from the prior Monday foreshadowed a sack spree that would ultimately dictate the outcome. 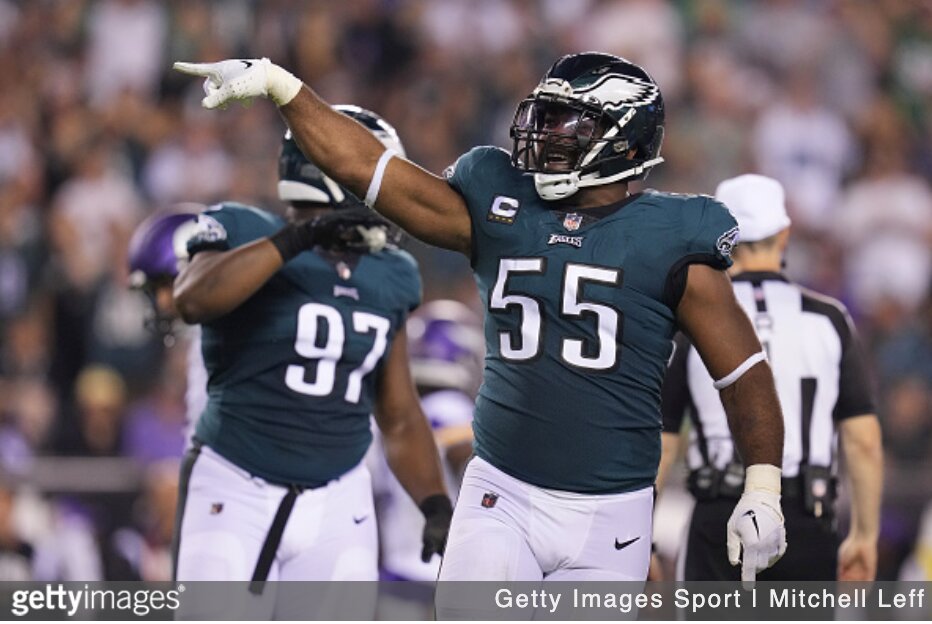 Brandon Graham led the sack parade against Washington with 2 1/2 sacks.

The Eagles unleashed two game’s worth of pent-up fury against Commanders quarterback Carson Wentz and a woefully inadequate offensive line, bursting through the proverbial turnstile and unceremoniously planting the former Eagles quarterback onto the FedEx Field grass for an astounding nine sacks.

More than a handful of those takedowns were a byproduct of Wentz’s well-chronicled superhero tendencies of holding onto the ball well after a play’s shelf life in attempt to threaten downfield.

“We just made it about us,” Graham said after the team’s third straight win. “We knew what we knew about Carson, but we knew it was a new day. He’s with a new team, and he knows his issues, too.

“But we just wanted to go out there and play as a team and keep getting better. Our standard is our standard, and I’m, just happy that we finally got one of them games where we got a nine-sack game. We were out there having fun, and we just wanna win, ‘cause we know how hard it is to win in this league.”

In the wake of a performance in Landover, Md., in which the veteran defender totaled 2.5 sacks, two tackles for loss, a forced fumble and five quarterback hits, it’s easy to forget that Graham is just a year removed from rupturing his Achilles in last year’s Week 2 home opener against the San Francisco 49ers.

The 34-year-old not only serves as one of the team’s captains, but remains a consummate leader and locker room pillar.

Graham is the Eagles’ tone-setter and defensive heartbeat, and his infectious energy and mentorship – an invaluable asset to this year’s team –  have already bore fruit.

The Sunday sack brigade also presented ample opportunity for Graham’s cohorts to get in on the action, as Fletcher Cox (1.5), Josh Sweat (1.5), Haason Reddick (1.5), Javon Hargrave (1.0), and T.J. Edwards (1.0) each had a hand in terrorizing the Commanders’ offensive line, an encouraging sign given the team’s hefty investment in pass rushers and unwavering philosophy of building through the trenches.

In contrast to the season opener, Eagles defensive coordinator Jonathan Gannon introduced far more intricate pressure packages against the Vikings, and on Sunday his defensive line pounced in a favorable matchup.

Some of the growing pains might have been attributed to the new additions learning to play alongside one another on the fly, or maybe Gannon was assessing strengths and weaknesses of his personnel.

It’s early, but the current trends point to optimism for the Eagles’ pass rush going forward.

“I know there’s always room to get better,” Graham acknowledged. “Like Jalen said, they didn’t score anymore points in the second half. Offense feels like they can get a lot better, and I know we can feel the same way. There were plays out there that we left.

“Overall, we look at the film, you start to see where you’re weak at and where people are gonna start hittin’ you on certain stuff, and you just keep makin’ it about us. That’s all you can really do.

“Every week is gonna be different; everybody attacks you differently, and just make sure that you stay on point with what we’re doing. I’m not worried about where we are right now, because it’s not how you start, it’s how you finish.

“I love how we’re starting, but we gotta make sure we finish the same way, ‘cause it’s a long season and it’s about gettin’ hot at the right time so we can carry ourself into the postseason.”