“Took It To Heart”

The Philadelphia Eagles are now 3-0 after a 24-8 victory Sunday over the Washington Commanders, at FedEx Field. winning for the second straight week in convincing fashion.

On the Inside The Birds Week 3 Postgame Show, Adam Caplan and Geoff Mosher were joined by Eagles Hall of Fame offensive tackle Tra Thomas to break down the game. 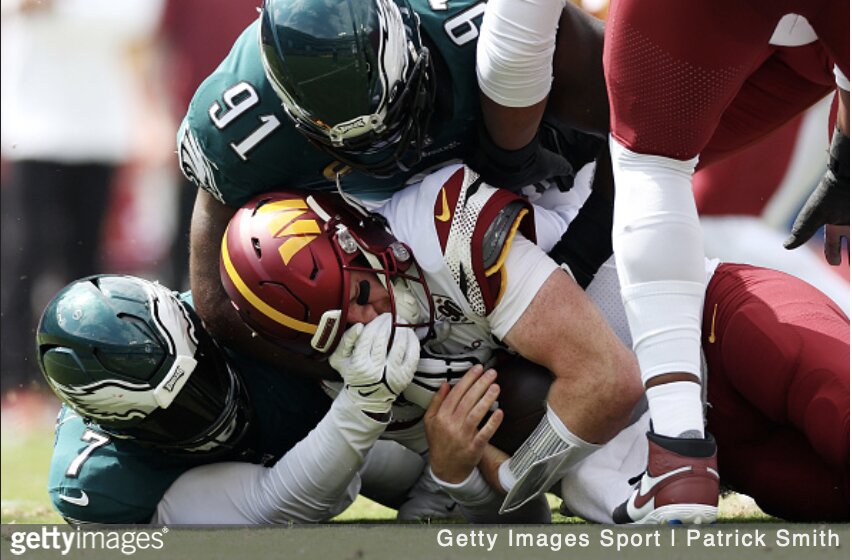 Adam Caplan: “Someone from the Eagles said to me that we’re going to learn a lot about how much energy Fletch has after the first game and how much pride he has, because he did not play well. We outlined how poorly he played in the first game. He obviously took it to heart. Whatever the tape showed him, that’s the truth. The tape told him he didn’t play well. In the last two games, he’s gotten after it.”

Tra Thomas: “I look at sacks and all of the pressures totally different because I think coverage dictates that. So, I think that our secondary play has been a lot better, especially after that Minnesota game. The Detroit game, they played off, they allowed all of the little dink-and-dunks down the field. In the Minnesota game, you saw they came out there a lot more aggressive, getting into the receiver’s face, throwing off the timing, allowing them to get pressure. This game here, same thing. The coverage is what dictates it which allows our defensive line to get out there.”

Geoff Mosher: “There were a decent amount of coverage sacks. Carson [Wentz] was trying to find it, and you know Carson, he’s not going to ditch it, he doesn’t always check down and he had to take a lot of hits.”

Caplan: “As good as (Washington’s) pass target group is, they were completely shut down. It was a great marriage between d-line play with a four-man pressure and stopping guys in coverage.”

Thomas: “If you have a spread offense, defenses have to play nickel, which means you only have six guys in the box, so if you have five offensive linemen, you have a chance, and all he [the running back] has to do is make one miss, and then he’s right up the middle, and he’s onto the second level. That’s something that you’re going to have to get corrected. You’re going to have your linebackers play a little bit more physical. You can’t have that backside defensive end get too aggressive trying to crash down in there, because now that opens you up to RPO’s or a play action coming from the backside. That’s something that will continue to get corrected as they move through this process.”

Caplan: “They got a couple runs up the middle when the Eagles were up big. If you’re the Eagles, you want them to run. When you’re up a couple of touchdowns, let them run. Let them milk the clock for you.”

Mosher: “But there was some in the first half when it was still a close game where I just surprised by it because Washington has a very bad rushing offense.”

Mosher: “What I liked from a Jalen Hurts standpoint – and I think you’re seeing it more this year than even last year – his understanding that you can attack a team from short, to intermediate, to deep, based on the down, distance, and the coverage that they’re showing. You saw the short [area] with the screen to (Dallas) Goedert, you saw the intermediate area to A.J. Brown today, and then deep to Devonta Smith. When you’ve got that rhythm and that symmetry going on, the offense is really tough to stop.”

Thomas: “When you can go out there and you can pick defenses apart like that – you had two plays where Quez Watkins was held that would have been touchdowns. Right now (Hurts) is really seeing the defense well, I think he’s operating with the offense knowing where everyone is going to be.”

Thomas: “I think the offensive line did a real good job with protecting. You go back and you look at it and we gave up three sacks. One of them was because you had Hurts out there messing around. And then (Landon) Dickerson had to come out of the game and we came out in the third quarter. You had (Sua) Opeta in and they got beat with the E-T (End/Tackle) Stunt. I thought overall, the offensive line did a solid job. I want to still continue to see the numbers come down when it comes to sacks.”