With the preseason over, the Philadelphia Eagles are now shifting toward Tuesday’s deadline to trim their roster down to 53.

On the latest edition of the Inside the Birds podcast, Adam Caplan and Geoff Mosher give their 53-man roster predictions and name which players could be on the outside looking in. 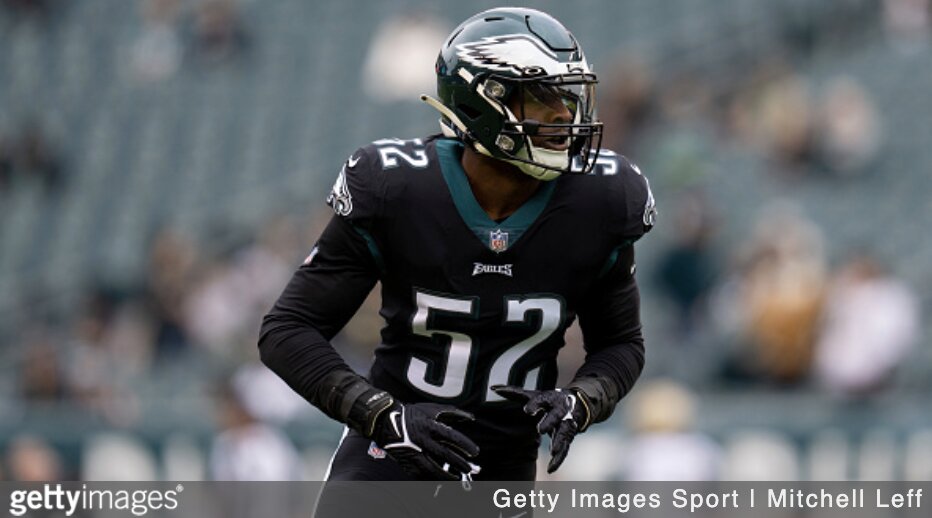 Eagles third-year LB Davion Taylor is on the roster bubble after a disappointing camp.

Geoff Mosher: “I don’t think he’s right for the Eagles because he did not prove himself, but the fact that he’s already been on three teams makes me think if they waive him, I could see a team claiming him off of waivers. Even if they don’t, you need a third quarterback. Why wouldn’t you hold on to Reid Sinnett and then when that other person becomes available, then you claim that person off of waivers and then get rid of Sinnett? I would hold onto him just to make sure I got my guy.”

Adam Caplan: “I would not. His tape was so bad in the preseason, he was so lost. You got to play the process out. He had the arm, coachable, smart guy. When the fastballs were thrown in the preseason, he struggled mightily. So what you do is you look at the waivers, you look at all of the quarterbacks who were cut who were not vested (veterans), you see all of the veterans that were cut, and you go from there.”

Caplan: “If he’s somehow on the roster, I just don’t see a role for him. Could he be a punt returner? Sure, but (Britain) Covey can do that too. (Quez) Watkins passed him by, (Devonta) Smith obviously, and (Zach) Pascal.”

Mosher: “The Eagles, without verbally saying it, moved on. They kept pushing Reagor down the depth chart where if you’re a first-round pick, you’re not going to be the fifth wide receiver on the team. I guess at this point, if he’s not traded, I don’t think the Eagles are going to release him so he’ll be on the team as a returner, and that would probably knock Britain (Covey) off.”

Mosher: “I was originally going with [Jack] Anderson [on the 53], we know they claimed him off of the Bills practice squad, they developed him last year, but I heard [Kayode] Awosika had performed well, maybe even at times better than Anderson. He’s not the biggest guy in the world, but he has been with the team longer than Anderson, because he was a rookie free agent from two years ago.”

Caplan “Here’s the only thing to consider. If you were to cut Anderson, he’s got a much better reputation with teams than Awosika does. Anderson would have a better chance of getting claimed. It wasn’t just the Eagles who tried to sign him off of the Bills practice squad [last year].

Mosher: “I think the intel is out on the Eagles offensive line. I even talked to some teams who were asking me about the Eagles backup offensive linemen. I sense that both of these guys would be in danger of being claimed because they’re versatile, they’ve been coached up by the Eagles, and the teams know that this team’s really deep on the offensive line, and there’s really bad offensive lines in this league. This one’s tough because Anderson is a guard/center and Awosika is a guard/tackle.”

Mosher: “He did not play well this camp. He’s good against the run, but he didn’t get the coverage down. Unfortunately, he got hurt last year, so that really stunted his development. He was starting to improve mostly as a run stopping linebacker. He was not great in coverage and that’s what he was drafted for. Maybe Howie (Roseman) keeps him because he’s a third-round pick, but it wouldn’t be the right move to keep him over Shaun Bradley.”

Caplan: “The role he was drafted for, (TJ) Edwards and (Nakobe) Dean took that role. This is where it becomes harder to keep guys like that who have not shown you enough to stay on the roster.”

Caplan: “I put Tartt on the practice squad. For whatever reason, we’re told he had trouble assimilating to the scheme from San Francisco which was completely different.”

Caplan: “He would be the surprise to make it. He was better than (Tay) Gowan, (Mac) McCain, (Kary) Vincent. If you put him on your 53, I would have no problem with it. He will definitely make the practice squad if he’s cut. Apparently, the reps he got in practice were really good.”