At 7 p.m. Saturday, the Eagles and Miami Dolphins wrap up preseason play at Hard Rock Stadium in Miami Gardens, Fla.

While generally slow-moving and often marred with penalties, the no-holds-barred preseason finale can often determine whether those elusive final roster spots are ultimately secured or squandered, as all 32 teams must trim their respective rosters from 80 to 53 by 4 p.m. EST on Tuesday, Aug. 30. 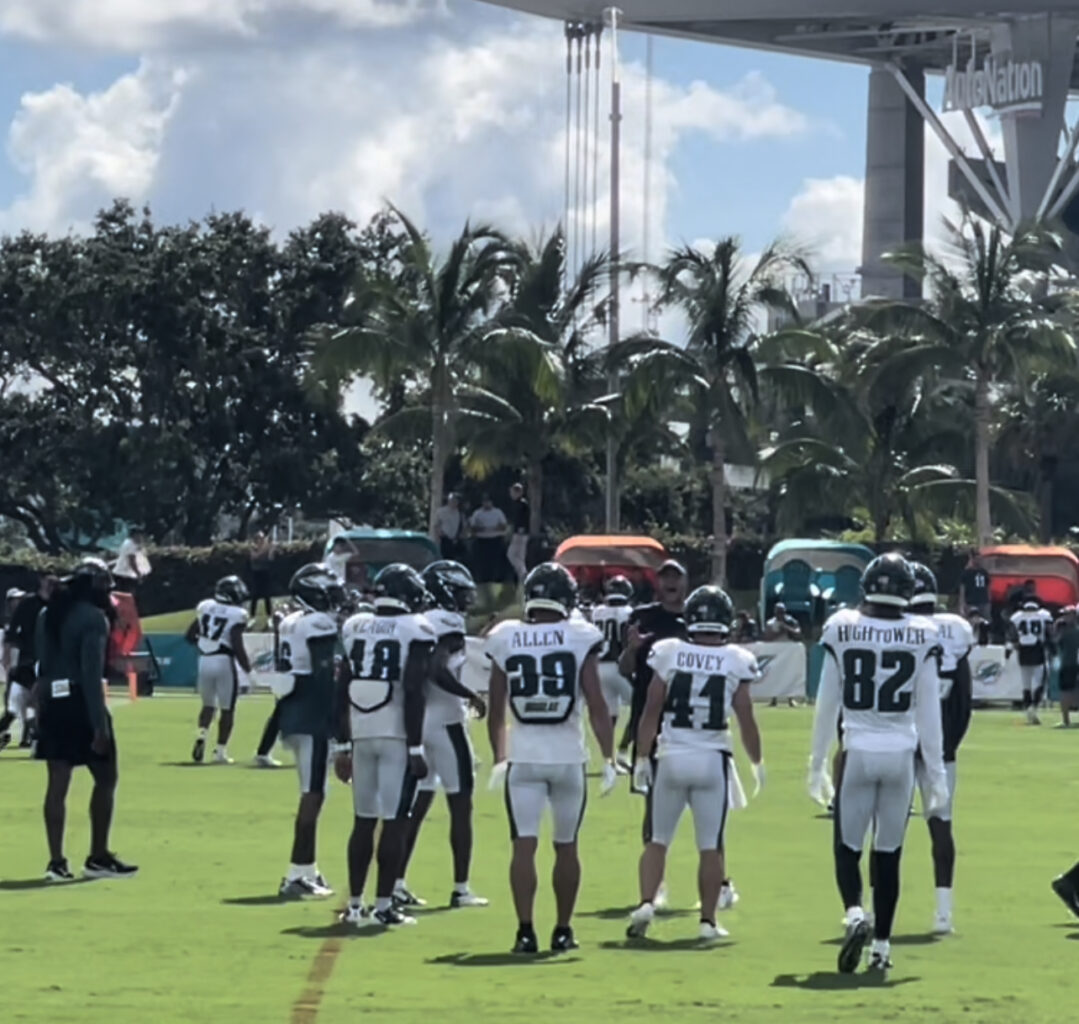 ITB photo: Rookie Britain Covey is battling with teammate for the last WR on the 53.

Cain again led all Eagles receivers in snaps last week against the Browns (41) and showcased his ability to fight through contact and reel in contested catches, as demonstrated on consecutive second-quarter receptions of 24 and 23 yards, respectively, from quarterback Gardner Minshew. Perhaps most notably, however, Cain also led his position group in special teams snaps (four), which – if there’s room – would ultimately punch his ticket onto the 53. A former 2018 sixth-round pick of the Indianapolis Colts, Cain also spent time with the Steelers and Ravens before landing on Philadelphia’s practice squad last October. The 6-foot-2, 202-pound wideout possesses intriguing size, fluidity, and is competitive at the catch point, but in order to stick around as a deep reserve on a crowded Philadelphia receiving corps, where he’s unlikely to see regular season action as a pass catcher, Cain must establish himself as an invaluable commodity in the third phase.

The buzz surrounding Covey has quieted in recent weeks, but the diminutive undrafted rookie figures to see a sizable snap share in his final roster bid. In case you missed it, merely weeks ago Covey appeared to be a shoo-in for a roster spot due to his ability to add a different dimension to a stagnant return game. The former Utah product seemed poised to become the latest in a long line of unlikely summer standouts who defied lengthy odds to earn a roster spot. While that outcome, of course, is still within the realm of possibilities, Covey hasn’t been able to maximize his opportunities through two games, parlaying four targets into one reception for five yards in 60 offensive snaps. The 5-foot-8, 170-pound wide receiver also combined for four yards on two punt returns and 47 yards on a pair of kick returns. Covey sprained his thumb against the Jets, but it hasn’t sidelined him or held him out of game action to this point. He’ll get an extended look on Saturday night, but given the depth at the position, Covey seems destined for the practice squad.

Calcaterra returned to practice only recently after missing the majority of training camp with a hamstring injury and is primed to make his preseason debut in Miami. Beyond Dallas Goedert and second-year pro Jack Stoll,  the presumed No. 3 tight end spot on the depth chart has been on shaky ground for much of training camp. Noah Togiai has had some nice moments in Calcaterra’s absence, but the Eagles will likely give their 2022 sixth-round pick every opportunity to earn his spot on the 53. When healthy, Calcaterra gives the Eagles a natural pass-catching, athletic, intermediary option who could feasibly overtake Stoll as Goedert’s primary backup once he becomes a more well-rounded tight end. Knowing how reliant young quarterbacks are on tight ends, I suspect Calcaterra will be peppered with targets against the Fins.

My thought going into training camp was that Gowan was the most physically gifted, and offered the highest upside, of any of the young Eagles cornerbacks on the bubble, and while I maintain that viewpoint, the emergence of Josh Jobe complicates Gowan’s path to the 53. While Jobe is the more versatile of the two – the former Alabama defender can play the outside, slot, and probably safety if asked – Gowan provides perimeter length, fluidity, and instinctiveness. At 6-foot-1, 186 pounds, Gowan adds a unique dimension to the cornerback room, and while he must continue to fill out his frame and increase his play strength, he’s proven to be an effective third phase contributor through two preseason games and his limited regular-season exposure last season. Jobe’s elbow injury could potentially open the door for Gowan to gain ground in the race for the No. 5 cornerback spot on the depth chart. If it isn’t too late.

Blankenship continues to prove the Eagles right for believing in him and awarding the undrafted safety with quality second-team looks throughout the summer. Against the Browns, Blankenship again appeared active, swarming to the football with urgency and generally holding his own on the back end. The former Middle Tennessee State standout logged 44 defensive snaps — accounting for 59 percent of the total defense – but notably paced the Eagles with a team-leading 15 special teams snaps. With Josiah Scott nursing a hamstring injury, and with Andre Chachere sidelined on Thursday (groin), the Eagles could potentially get an extended look at Blankenship against the Dolphins. Not sure a convincing case can be made that Blankenship is among the best 53 players on the roster, but the Eagles undoubtedly like what they’ve seen from the 6-foot-1, 203-pound safety. My guess is that Blankenship spends the 2022 season on the Eagles’ practice squad, where he can refine his skill set and make a serious run next summer, but I wouldn’t be surprised if he appeared in a game or two this season on special teams.

– Listen to the latest “Inside The Birds” podcast featuring Geoff Mosher and Adam Caplan: