The Eagles began their practice this week in Miami, with the first of two joint practices against the Dolphins in preparation for their final preseason game.

On the latest edition of the Inside the Birds podcast, Adam Caplan and Geoff Mosher – who were on hand in South Florida – shared their intel and observations. 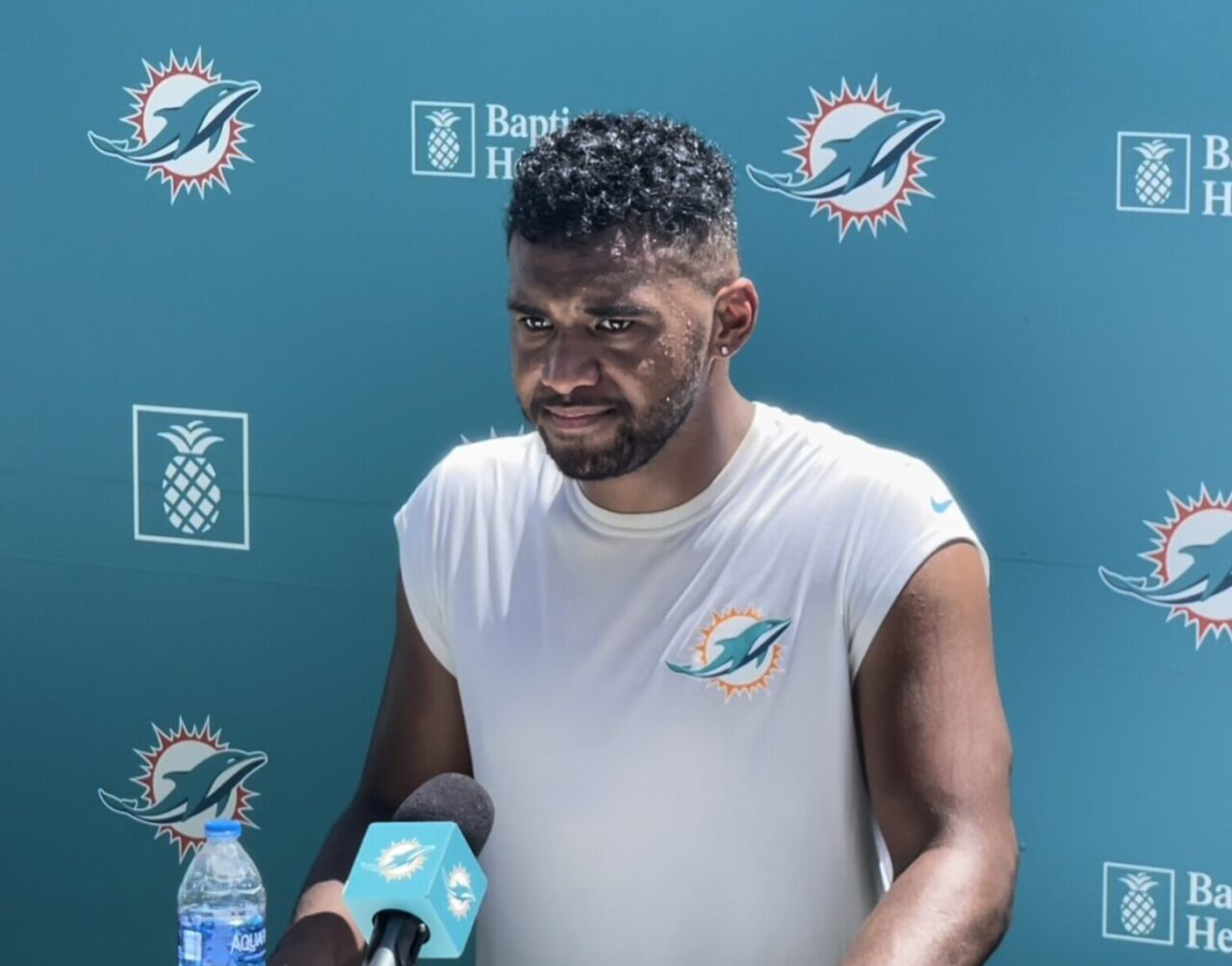 Geoff Mosher: “Because of the defense Miami was playing – they were putting a ton of guys on the line of scrimmage, they were blitzing, they were showing blitz and dropping, they were doing a lot of creative stuff – we mostly saw from the Eagles offense dump-downs, check-downs. I think the ball went deep into the air maybe one or two times. I think DeVonta Smith got targeted deep once, but for the most part, just not a whole lot there. It seems like the whole point for the Eagles quarterbacks was to get rid of the ball.”

Adam Caplan: “If I’m an Eagles coach, I’m really glad that they faced this defense. They play a completely different 34 [front] than the Eagles [run]. The Dolphins run a New England 34, which is a ton of pre-snap movement.”

Mosher: “The positive I would take away from that is you worry about confusion and turnovers, but I don’t believe I saw Jalen Hurts throw an interception…Hurts himself did a good job protecting the football, even when things weren’t going great for the offense.”

Mosher: “Sinnett struggled. There were a couple of interceptions on his part. Again, this was a very aggressive defense. I don’t know how much of it he was prepared for, so it’s going to happen, but he didn’t look particularly sharp in the team drills that I recall.”

Caplan: “He definitely has the pop in his arm, that’s not going to be a problem, but running with the third team, he got pressured.”

Mosher: “When you’re bringing that many people as Miami was at times, when you bring more than five, then it’s not always on the offensive line. You got running backs, you got tight ends, and your quarterback has to know when you’re bringing more than five that he’s got to get rid of the ball, so this wasn’t all on the offensive line. I don’t want people to think that because there was a lot of pressure that the O-line did not hold up well against the Dolphins D. It was just a very aggressive defense.”

Caplan: “Because of their safeties, they got crushed on the seam. They played a lot of 2-high shells and they got hit in the middle. [James] Bradberry didn’t work, he was very limited, so one of their starting cornerbacks was out. (Zech) McPhearson got a ton of snaps…It seems like they didn’t tighten up the safeties. It seems like there was lots of room for most of the practice.”

Mosher: “There was also room in the flats. Tua [Tagovailoa] did a good job of getting his running backs and tight ends in the flats. We talked about that with the defense the Eagles are running. When they have overhang defenders, that’s going to be difficult for the Eagles because guys like [Haason] Reddick and [Josh] Sweat are not rush and cover guys. They’re rush guys. That is certainly the challenge that awaits Jonathan Gannon in the regular season is how to defend certain areas of the field that might be exposed because of the style of defense they play and the personnel that they’re using to play it.”

Mosher: “I loved what I saw, not just because he’s a good pass rusher, but Jonathan Gannon moved him around. We talked about the importance of you – can’t just line this guy up over a tackle 40 times a game and expect that he’s going to beat that guy. He’s got to be a moveable piece. In some regards, he’s almost like the old Jim Johnson ‘Joker.’ They funneled him all around the defense and that was good to see.”

Caplan: “Reddick when he was interviewed locally talked about how much he loved the way they’re using him, which is encouraging. There’s no linebacker in the National Football League who is rushing the passer every down. You can’t just not have the guy cover, but you obviously want to limit that. You’re paying him 15 million a year to rush the quarterback.”