What’cha Do For An Encore?

At 1 p.m. Sunday, the Eagles face the Cleveland Browns in a rare Sunday preseason game at FirstEnergy Stadium.

While the Eagles narrowly fell to the Jets last week, 24-21, several back-end players helped their respective cases in their quest to make the 53-man roster.

Let’s take a look at five players I’ll be monitoring on Sunday: 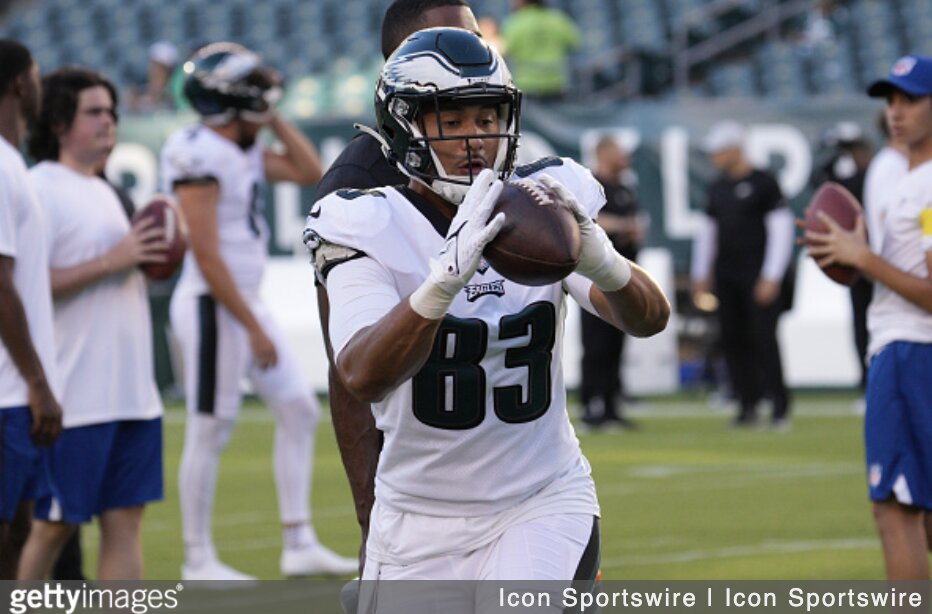 Eagles TE Noah Togiai is making a push to be the No. 3 tight end

After impressing during training camp, Sinnett showcased an uneven Eagles debut last week, completing 9-of-17 pass attempts for 81 yards and a touchdown. He was also sacked three times. The 25-year-old journeymen remains comfortably ahead of undrafted rookie Carson Strong in the pecking order, but Sinnett has two games left to convince Eagles brass that he’s worthy of an elusive roster spot on the 53. Against the Browns, Sinnett must settle in early, make quicker decisions, and get the offense into an early rhythm if he expects to garner roster consideration.

Togiai reeled in all four of his receptions for 29 yards against the Jets and appeared to establish a rapport with the Sinnett, which is notable, as both players figure to absorb a hefty snap share against the Browns. Beyond Goedert and second-year pro Jack Stoll, the Eagles have a vacancy at No. 3 tight end, though veteran Richard Rodgers is the only other healthy tight end in contention with Togiai. On special teams, Togiai recorded two tackles on 14 snaps last Friday, which was a team-leading effort.

Johnson has quietly put together a solid camp heading into Year 2, but the former Tulane standout faces an uphill battle to make the roster. A seventh-round selection in 2021, Johnson provided value for the Eagles last season, appearing in 17 games (2 starts) and racking up 17 tackles (one for loss), accounting for 10 percent of the team’s defensive snaps. This time, the 6-foot-2, 248-pound defender finds himself in contention with the likes of Shaun Bradley, Kyron Johnson, and JaCoby Stevens for a roster spot, though Bradley and Patrick Johnson offer the most special teams upside. As a seldom-utilized SAM linebacker, should he withstand cutdown day, Johnson’s pathway to a roster spot will have to come via  third phase, where he led the team in snaps (17) against the Jets.

Jobe is a player to whom I assigned a fifth-round grade during the pre-draft process for his college pedigree, football intellect, potential positional versatility, and special teams prowess. At 5-foot-11, 182 pounds, Jobe isn’t going to win with long speed or fluidity, but rather his football acumen, physicality, and instincts. Seeing Jobe early against the Jets raised more than a few eyebrows, and quarterback Mike White peppered his side of the field with targets, but the Eagles have seen something they like out of the undrafted cornerback from Alabama. He’s ahead of fellow UDFA Mario Goodrich on the depth chart and might well be able to stave off other contenders for the fifth, and presumably final, cornerback spot. I’ll be watching to see how he responds after a challenging opener.

In terms of safety, the Eagles lack much certainty beyond Marcus Epps – a first-year starter. Veteran Jaquiski Tartt, who had been away from the team due to personal reasons, still must integrate into Jonathan Gannon’s scheme, while Anthony Harris is merely a stabilizing presence with a limited skill set. Third-year safety K’Von Wallace has never amounted to much more than a special teams contributor and has become an afterthought. Blankenship, however, has reaped the benefits of a dire position group. The undrafted prospect from Middle Tennessee State has earned a handful of first- and second-team reps throughout camp and parlayed his success into a team-leading seven-tackle performance against the Jets in 35 snaps. What Blankenship lacks in athleticism, he makes up for with physicality and anticipation. He’s more of a practice squad projection as of now, but Blankenship has an outside shot at one of the final roster spots if he can excel on special teams.