While the Philadelphia Eagles fell 24-21 to the New York Jets in the opening weekend of the preseason, the team is more focused on evaluating performances rather than the scoreboard.

On the latest edition of the Inside the Birds podcast, Adam Caplan and Geoff Mosher provided intel and broke down performances from Friday night’s game.

Adam Caplan: “Carson Strong didn’t even play…Sinnett was terrible. But Nick [Sirianni], to his credit, said he was nervous…The second half of his snaps he settled down. It was better, but he needs to settle down a bit.”

Geoff Mosher: “You can’t sugarcoat it, everybody saw it. It just was not a very impressive debut for him. All we reported on the progress he’s made and why the coaching staff loves him, they wanted to get a good extended look at him. Without knowing this, but just based on some of the things we’ve been told leading up to the game, feels like maybe they just don’t want to put Carson Strong in a situation to fail, because he’s just not there yet. He’s not performing well in 7-on-7s at times, so it’s tough to ask him to go out there in a game if he’s not comfortable with the offense, even in a preseason game.” 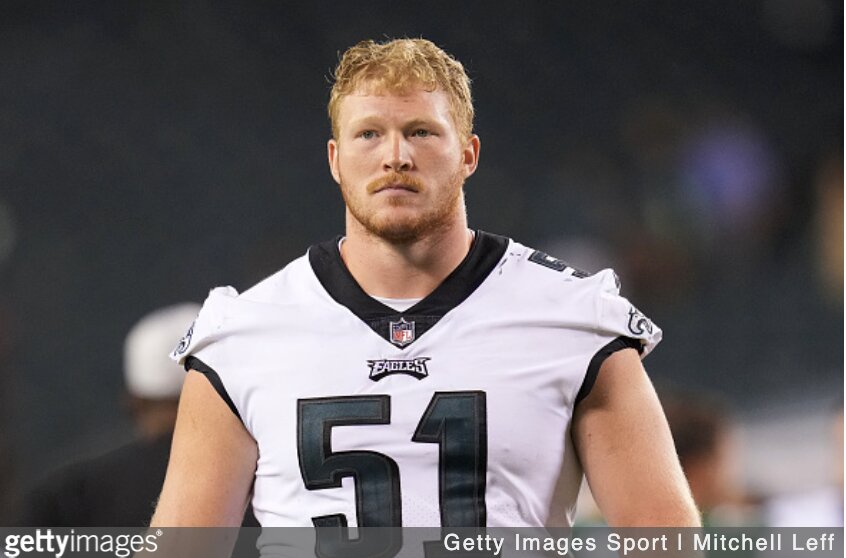 Rookie C Cam Jurgens, a 2nd-round pick, was among the standouts of the preseason opener.

Mosher: “For a guy to step in and play like that, I know the Jason Kelce comparisons are out there, you can see why. What he did well was getting into space, covering up linebackers on screens or on kick-outs for runs. He’s athletic, you can see it in him.”

Caplan: “He’s had a good camp. He’s a little bit ahead of schedule, as we understand it. Obviously, he’s going to start for [Jason] Kelce in the preseason because Kelce will not be available until Week 1.”

Mosher: “I thought Jalen did a really good job of, when you go up against the Jets, who play predominantly Cover 3, the seams are going to be open… If you noticed, many of the throws – including the touchdown to Dallas Goedert – were right around the seams or the hashmarks…This is my lone criticism of Hurts. If we’re going to give him credit, he read the Cover 3 really well, he read the seams well but we also have to discuss some of the things that he has to work on, and bailing from the pocket is something he has to work on. He said there was pressure…There was not NFL pressure. Greg Cosell talks about perceived pressure versus actual pressure. On that [scramble] play, Jermaine Johnson is being blocked by Lane [Johnson]. Now, he’s pushing Lane back and pinching the pocket to Hurts’ right, and what that did was create a little alleyway for Hurts where he could have stepped up, but he ran out of the pocket. If he stepped up, he would have some pretty good opportunities to make a good pass there.”

Caplan: “I don’t disagree with you. The thing that we were told is that for the first time since he’s been an Eagle, he’s not bailing a lot. We were told this spring and summer he was way better with it. It’s not perfect yet and you’re not expecting it to be perfect, they just have to make him aware.”

Mosher: “I think there were times where he – like a lot of small, shifty backs – tries to go east to west a little bit too much. It took him three times to get into the end zone on the touchdown. I thought he caught the ball well and showed good straight-line speed, but we already know he has good straight-line speed. As a runner, I wasn’t overly impressed.”

Caplan: “The first three plays (they played) three down (lineman), 1 up. The one overhang was [Haason] Reddick. Brandon Graham was the d-end when they played four down.”

Mosher “That surprised me a little bit. They were way more of a four-man front. Not as much 5-1, 5-2, not until the second quarter did I see the first evidence of two overhang players on each side.”

Caplan: “The only thing we feel very certain of this year is they’re going to be super multiple because they have Reddick, they have new players, they have a lot more talent on all three levels of their defense.”

Mosher: “Great instincts, great hands. I don’t know what Zach Wilson was thinking. He looks at the target, throws at the target, and he basically cued it up with a red carpet for Kyzir White to just jump in front of it and make the play. But we’ve seen linebackers and defensive backs not even be able to catch that, so it’s good that he was able to catch that, return it 20 yards, flip the field. This is something the Eagles absolutely need to do more in the regular season. They need to be more of a takeaway defense.”

Caplan: “The hope is that, if he does well enough, that he’s a practice squad developmental guy. It hasn’t worked out for K’Von Wallace. They just have not developed a lot of young players in the secondary.”

Mosher: “I think Reed Blankenship is going to make the team. I think they’re going to wind up stashing a [veteran] safety on the practice squad. My antenna’s up on what they’re doing lately on how they’re releasing veterans you think they’re going to keep…and they do it to keep young talent. I have a feeling, especially at that spot at safety where they really need some young guys, that he might wind up making it.”