[Editor’s Note: This is the seventh in a series of stories on InsideTheBirds.com by Andrew DiCecco recapping the Eagles offseason and looking to the 2022 season. Today’s story focuses on best area of strength offensively.]

As difficult as it was to identify a sore spot offensively for the Eagles, deciding upon the unit’s greatest strength between two positions is perhaps even more daunting.

A once-beleaguered receiver room has palpably evolved this offseason, largely due to the addition of 25-year-old Pro Bowler A.J. Brown, who has eclipsed the 1,000-yard receiving threshold twice in three NFL seasons.

The 6-1, 226-pound wideout provides a distinct physicality and open-field explosiveness unique from any receiver currently rostered on the Eagles, and his mere presence figures to create increased opportunities for other wideouts DeVonta Smith and Quez Watkins to bust loose in what figures to be a high-octane aerial attack.

In spite of the revamped receiving corps, however,  the big winner offensively – until otherwise proven – continues to be the team’s formidable contingent of offensive linemen, led by revered guru, position coach Jeff Stoutland. 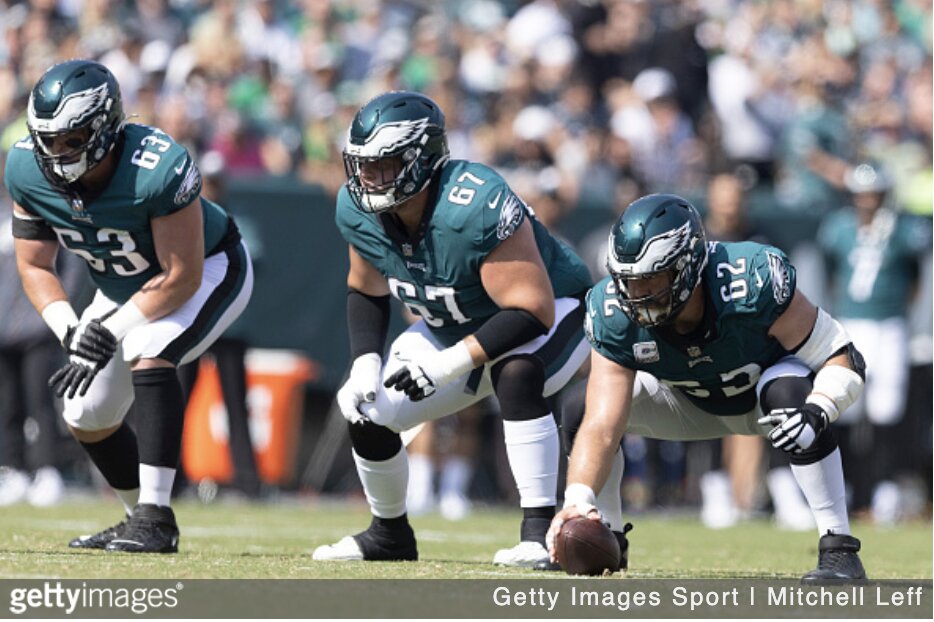 Once again, the Eagles’ O-line is the strongest unit of the team’s offense.

Veteran linemen Jason Kelce and Lane Johnson, pillars at center and right tackle, respectively, lead a talented and depth-laden unit that fuses youth with long-serving mainstays, and should supply quarterback Jalen Hurts with the ample protection to facilitate the ball to the aforementioned receiving weapons.

In addition to Kelce and Johnson, the starting unit is rounded out with stalwart 25-year-old left tackle Jordan Mailata and 23-year-old left guard Landon Dickerson.

Dickerson, the team’s second-round selection a season ago, started 13 of the 14 games in which he appeared and improved throughout the season, while has remarkably proven himself to be among the team’s most pronounced draft successes in recent years.

Banking on his development and upside, Mailata was essentially a Day 3 dart throw, selected in the seventh round of the 2018 NFL Draft.

Five years later, the Eagles – primarily Stoutland — have molded the Australian into one of the game’s premier blindside protectors.

One of the big-ticket training competitions to monitor will be at right guard, where veteran holdover Isaac Seumalo will need to rebound from last season’s Lisfranc injury to stave off Jack Driscoll, Sua Opeta, and Jack Anderson.

While Anderson might not yet register as a household name, the former Bills draft pick was thought highly enough of for the Eagles to poach him from Buffalo’s practice squad early last season, stashing him as a weekly inactive.

Which, of course, can snowball into the all-too-familiar scenario the Eagles have been forced to navigate in recent years.