ITB: Time To Move On From QB Run-Centric Offense

While the Philadelphia Eagles take a month off before training camp, their fans still have eyes on quarterback Jalen Hurts and whether he’s the long-term answer.

On the latest Inside the Birds podcast, Adam Caplan and Geoff Mosher answered #AskITB questions about Hurts, other Eagles, and an NFL QB debate. 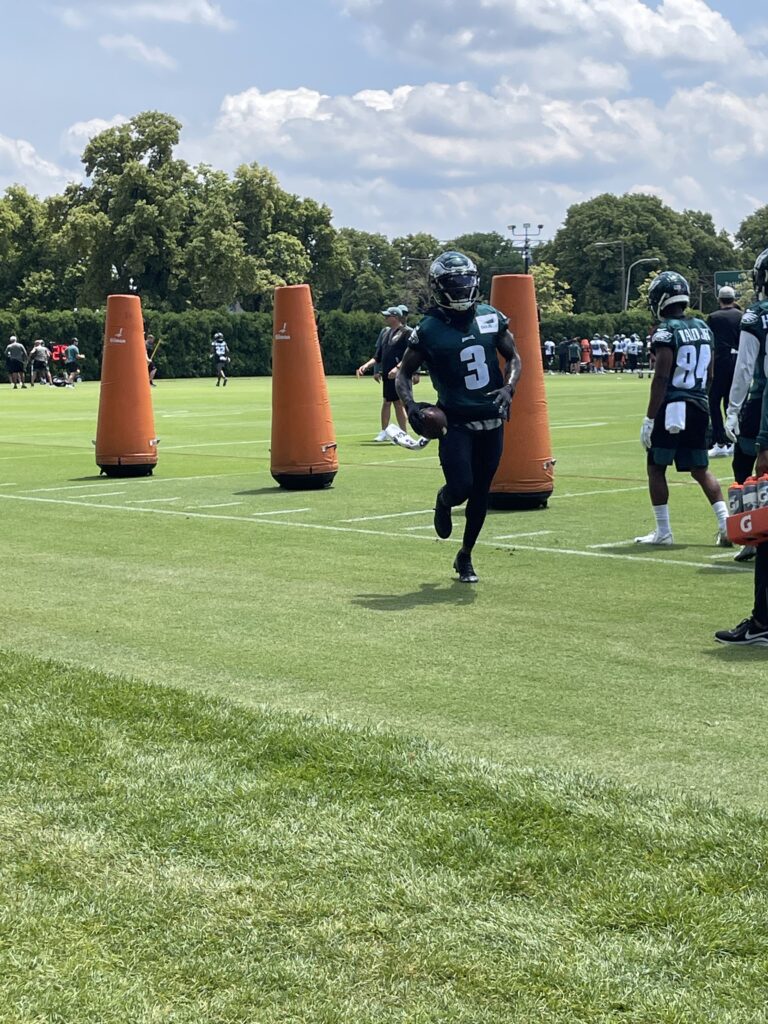 Adam Caplan: “Teams typically don’t draft just on analytics. There has to be something on the tape. An NFL analytics guy who does work for a team told us you have to have production…JJ Arcega-Whiteside was drafted heavily on analytics: height – 6-2 – weight, somewhere around 220 pounds. He ran fairly well for a guy his size, his catch radius is very big for analytics, and there was certain metrics he hit. That was a heavy analytics pick.”

Caplan: “At some point, it’s going to catch up to you if you continue to run. You’ve got to become more of a passer. At what point do you stop doing it?”

Geoff Mosher: “I think the idea that Jalen Hurts needs to develop as a passer isn’t just to avoid injury, but it’s also to mature into a pocket quarterback who can hurt you in the passing game…I think the running will always be a part of his game when it needs to be, but I don’t think they can run the style of offense they ran for a few weeks last year, which was the designed-run-and-RPO style offense, for the entirety of the season. You can’t run designed runs six, seven, eight times a game. That cannot be the case when you got AJ Brown, Devonta Smith, Dallas Goedert.”

Caplan: “If by midseason, they’re a running team, someone is getting benched, because that’s not what this owner wants. Everybody knows this. Now you’re in the second year of the system. As we noted on our previous show, he’s doing a better job on his timing. When a quarterback sees it better, they’re less likely to run.”

Caplan: “How can you think Hurts doesn’t need the practice time? He’s got new pass targets and because in training camp practices are shorter now and there’s one less [preseason] game. I have to trust the Eagles judgment on this because they have better information than we have.”

Mosher: “I’m alright with the overall philosophy that you want to treat OTAs differently than you have in the past and focus on more fundamentals and position work instead of team work, but you can still take those days that you’re allotted to work on that stuff. You don’t have to give those days up just because. You’ve got some new and young guys who need that work, who need that critical time and development that are also being told there are six extra days you don’t have to come to, and I don’t see how that is beneficial at all.”

Mosher: “Lane is still really good. He keeps himself in great shape. He is a workout warrior to the max. He missed three games last year to deal with anxiety and depression issues. He came back and he played at a high level. He has had some nagging injuries throughout his career. But he keeps himself in really good shape. Based on what you see in the offseason, he looks really strong and ready to go.”

Caplan: “His play has not really dropped off. It’s one thing if they drafted Jack Driscoll to potentially be Lane’s replacement, that’s not really the case. It’s not like they spent a first-round pick on a tackle. They haven’t done that yet.”