[Editor’s Note: This is the second in a series of stories by Andrew DiCecco on InsideTheBirds.com recapping the Eagles offseason and looking to the 2022 season. Today’s story focuses on the player most poised to make the biggest jump from last year.]

Scanning the Eagles’ roster, you’ll find a host of second-year players primed to take the next step.

There’s no doubt wide receiver DeVonta Smith fits the bill on the surface, but the 23-year-old already set the bar high with a productive rookie campaign that included 64 catches for 916 yards and five touchdowns.

Also qualifying are cornerbacks Zech McPhearson and Tay Gowan, though a stronger case could have been made fore each before the team signed James Bradberry.

As it stands, McPhearson and Gowan will be fighting to earn the No. 4 position on the depth chart.

Kenny Gainwell, who carried the ball 68 times for 291 yards and five touchdowns last season, albeit in a limited role, was my initial choice.

Despite Miles Sanders serving as the team’s de-facto lead back and having much to prove, Gainwell should see more than enough opportunities to come into his own.

In fact, I expect Gainwell to supplant Boston Scott in the pecking order and become an even bigger part of the passing game as early as training camp.

While each of the aforementioned Eagles stands to gain some momentum this season, for my money Milton Williams has the most to gain.

He played 272 fewer snaps than Javon Hargrave as the team’s third interior lineman in the rotation – and will presumably bump to fourth when 2022 first-rounder Jordan Davis is ready. 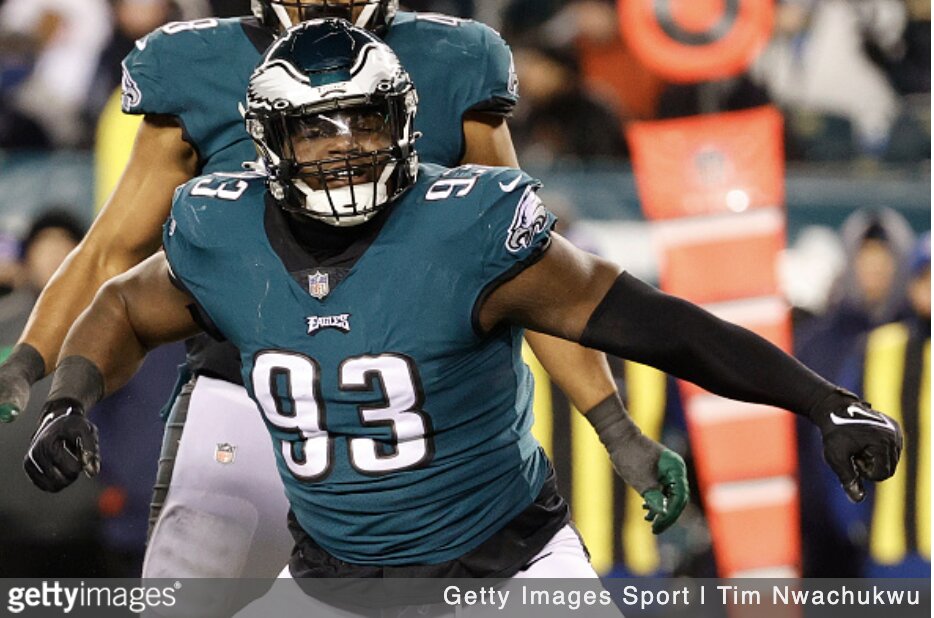 Milton Williams’ verstaility could enable his second-year breakout on the Eagles’ D-line.

So how exactly can Williams be positioned for a second-season surge?

As his rookie season indicates, Williams is capable of playing multiple positions, and I envision the former third-round pick getting plenty of looks at edge rusher this season.

Veteran defensive end Brandon Graham is 34 and returns from a torn Achilles, while the unit’s primary reserve – former first-round pick Derek Barnett – has garnered more attention for his on-field infractions than his production.

Tarron Jackson is merely a fringe rotational player who’s bound to find himself fighting for a spot every summer.

Depth at edge rusher may appear marginal and lean, but bear in mind that Williams can serve as an effective supplement, giving defensive coordinator Jonathan Gannon the optionality for different looks and and to implement an aggressive, attack-based philosophy.

The addition of Davis also will create opportunities for not only his defensive line cohorts, but for teammates at all three levels, giving powerful, explosive players like Williams the luxury of feasting on single blocks.

While Williams won’t figure into the team’s plans as a starter in 2022 – barring something unforeseen – the Louisiana Tech product possesses the skill set, long-term upside, and versatility that warrant an extended look in Year 2.