Badly needing an injection of young, blue-chip talent, the Philadelphia Eagles on Thursday used the 13th overall pick in the 2022 NFL Draft to make what they hope is an enormous upgrade to their defense.

Surely, former 340-pound former Georgia defensive tackle Jordan Davis is an enormous human being with one of the rarest combinations of size and athleticism that the sport has ever seen, a new piece for coordinator Jonathan Gannon’s defense.

Davis ran an eye-popping 4.78 in the 40-yard dash at the Combine, one of the most staggering 40 times ever for someone of his size and weight – not to mention the 32-inch vertical he also posted. 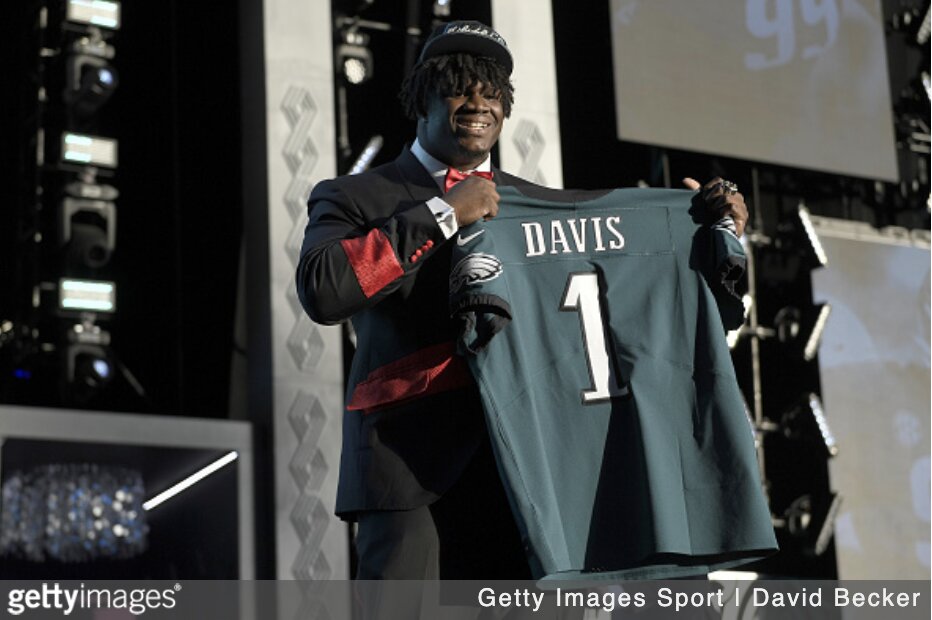 The Eagles moved up two spots in the first round for Georgia product Jordan Davis, an athletic freak of nature.

Brown, who has two 1,000-yard receiving seasons and averages more than 16 yards per catch in his career, represents a major hit at wide receiver after the Eagles missed out on trading for Falcons receiver Calvin Ridley and lost out on Allen Robinson and other high-profile free-agent wide receivers.

The Eagles dealt the 15th overall pick along with picks No. 124, 162 and 166 to Houston to move up for Davis, a unicorn-type prospect whose athleticism is tampered only by his struggles weight issues at Georgia.

Davis, who embarked on a major slim-down leading up to the Combine, losing around 20 pounds before heading to Indianapolis, is expected to be an immediate upgrade to the Eagles’ run defense, which was one of the NFL’s worst for the first half of 2021, prompting Gannon to make some scheme and personnel changes. Keeping his weight manageable will be one the team’s obstacles.

Personnel sources told Inside The Birds in days leading up to Thursday night that Davis had played at well over 360 pounds and despite attempts by Georgia coaches to better manage his weight.

“It’s very, very difficult to find guys with his athleticism ability and size,” an NFC personnel executive told Inside The Birds. “Is he gonna give you 10 sacks a year? Absolutely not. But he’s still gonna pressure the QB because of that athletic ability and size. On top of that, it’s extremely difficult to run the ball on these guys.”

The Eagles already have starting defensive tackles in Fletcher Cox and Javon Hargrave, but the 31-year-old Cox – a six-time Pro Bowler drafted 12th overall by the Eagles in 2012 – returned to the team on a 1-year deal after a disappointing 2021 season and Hargave, who made the Pro Bowl, enters the final year of his contract.

Davis only recorded 2 1/2 sacks this past year for Georgia and played limited snaps. He also wasn’t a major part of the national champion Bulldogs’ pass rush. Those are questions the Eagles will have to answer in the coming days, and a challenge for Davis as he adjusts to the pro level.

The Eagles have enough pass rushers this year if Davis doesn’t contribute there, but Brandon Graham, Derek Barnett, and Cox aren’t likely to be with the team in 2023. The Eagles didn’t pick Davis 13th overall to play first and second down for his whole career.

“He’s more of a weight [issue] for us than lack of third-down value,” an AFC scout told Inside The Birds leading up to the draft. “The only time he’s been able to control his weight was before the Combine.”

As for Brown, who the Eagles also forked over a third-round pick to attain, the Eagles immediately agreed to an extension with the 51st overall pick from 2019. Brown had been seeking an extension from the Titans and was vocal about the lack of progress.

Brown reportedly received a four-year, $100-million extension from the Eagles, with $57 million guaranteed.

Brown had also been working out recently with Eagles quarterback Jalen Hurts, who should be the biggest beneficiary of the team’s new weapon.

The 6-foot-1, 226-pound excels in space and is known for his run-after-catch acumen and his presence will allow Eagles head coach Nick Sirianni, the offensive play caller, to be more creative with Devonta Smith, last year’s first-round pick who set a team rookie record with 916 receiving yards.

The 170-pound Smith can play the Z position, which typically sees less press coverage, and can move around the offense while Brown will likely align mostly at the X spot.

The Eagles, who started Thursday night with 10 picks, have just four remaining picks for the rest of the weekend unless personnel chief Howie Roseman makes more deals. They have one pick in the second, third, fifth and seventh rounds.

Scott, Maddox Out Vs. Jags

[UPDATED: 4:53 p.m.] Eagles running back Boston Scott and slot cornerback Avonte Maddox are out for Sunday’s game against the Jacksonville Jaguars, per the team’s final injury report before the matchup. Dealing with a rib injury, Scott hasn’t practiced this week. He has 10 carries this season for 29 total yards, with two carries for…

ITB: Pederson Brings (Another) Ball Control Offense Back To Linc