In this edition of “DiCecco’s Draft Notebook,” highlighted are defensive prospects who stood out at the NFL Scouting Combine and could find themselves on the Eagles’ radar.

On Monday, we covered offensive standouts. 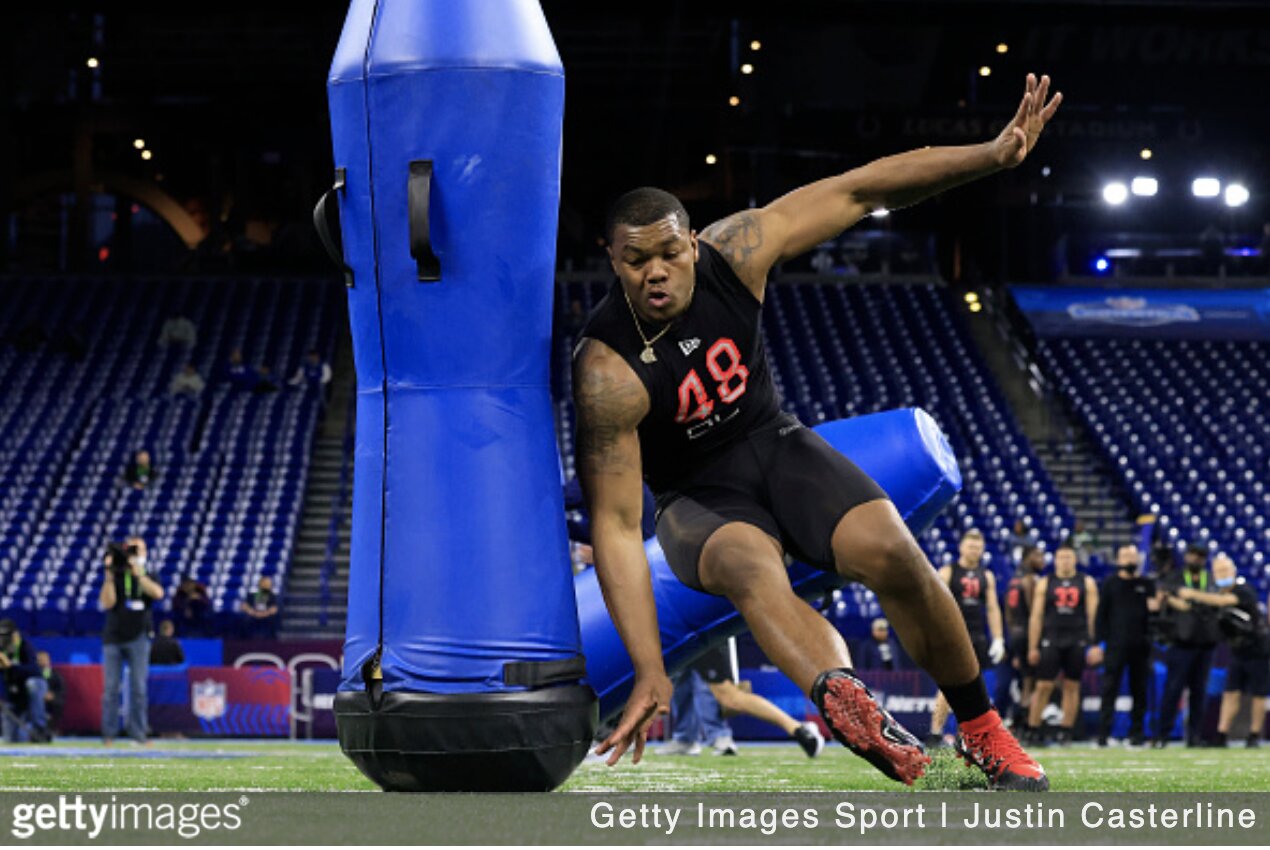 If the Eagles are truly committed to selecting the best player available, two of their three first-round picks could be devoted to the defensive line.

Currently in short supply of edge rushers and interior linemen, the Eagles should have an opportunity to invigorate the trenches with a pair of NFL-ready Georgia Bulldogs in Travon Walker and Jordan Davis.

Walker offers length, power, and the ability to anchor against the run.

Though hardly qualifying in the overly twitchy or explosive category, the versatile defensive end consistently demonstrates active, violent hands and wins by creating leverage. If he falls to the Eagles, he’s a plug-and-play starter.

With the Eagles’ defensive tackle landscape in dire straits, Davis warrants consideration as a viable long-term complement to Milton Williams.

The mammoth mauler plays with tremendous power at the point of attack. While he doesn’t offer much in the way of pass-rush upside, Davis possesses game-wrecking potential as a relentless pocket-pusher, occupying double teams and serving as a force against the run.

Should the Eagles look to the second round to secure another defensive lineman – or potentially even trade down in the first-round – a prospect who should entice them is Minnesota’s Boye Mafe.

Mafe (6-4, 261) parlayed his Senior Bowl dominance into another impressive showing, this time at the Combine, clocking a 4.53 40-yard dash and posting a 38-inch vertical.

Dynamic athlete with outstanding first-step quickness. Immensely raw prospect, but the upside is undeniable. He’s only scratched the surface.

The second round also figures to fetch another Bulldog standout, Devonte Wyatt. The 6-foot-3, 304-pound interior lineman was another beneficiary of the testing in Indianapolis, showcasing his explosiveness with a 4.77 40-yard dash.

I’m not sure it makes sense to even entertain the possibility of the Eagles drafting a first-round linebacker. However, the perpetually underwhelming production from that position likely forces their hand to address the position early.

While more than a handful of enticing second-level defenders will be there for the taking in the first two rounds, what if the Eagles decide to wait?

Well, the NFL Scouting Combine served as a critical reminder that impact players can be still found after Rounds 1 and 2. Prospects such as Wisconsin’s Leo Chenal and Montana State’s Troy Anderson are examples.

Chenal is a force at the point of attack and plays the game with a downhill, smash-mouth mentality.

While he’s a potent blitzer, sound tackler, and uses his hands efficiently, Chenal is bit more limited than his testing numbers suggest. The Wisconsin standout is disruptive around the line of scrimmage and difficult to move, but appears out of his element in coverage, where his range and lateral quickness underwhelm.

However, if he’s coupled with a player who specializes in coverage, Chenal should thrive alongside him.

He offers requisite length and play strength to disengage from blockers, instinctiveness, shrewd football intellect, and always maintains a fast-flowing pursuit to the football.

His play style translates favorably to the new-age NFL. If Anderson is available when the Eagles are on the clock at No. 83, they should pounce.

The Eagles should begin to retool an aging secondary with depth, but they are likely to miss out on Cincinnati’s Sauce Gardner, who all but cemented his status as a top-10 selection in Indianapolis.

However, the team will be positioned to secure multiple starting-caliber secondary players in the first round, namely cornerbacks Andrew Booth [Clemson] and Trent McDuffie [Washington].

Nevertheless, No. 51 could be an ideal spot to replenish the safety position, which should be within range to snap up Georgia’s Lewis Cine.

Given his length, Cine could stand to add another 10-15 pounds to his frame. Adept in coverage in confined spacing, but doesn’t offer the desirable deep range.

Should the Eagles decide to add a second cornerback to the mix, UTSA’s Tariq Woolen is a prospect who checks all boxes as an enticing Day 3 prospect.

Woolen offers length, fluidity, and inherent athleticism that teams covet in perimeter cornerbacks. Perhaps more appealing is that he’s raw and still learning the nuances of the position – he spent his first three seasons as a wide receiver.

Bet on traits and rely on the coaching staff to refine his skill set.