Well, a football game took place Saturday night on prime time at the Linc. Only one team actually seemed interested in winning it.

The Eagles weren’t that team. And they were perfectly OK with that.

They played mostly backups while the Dallas Cowboys surprisingly played their starters the entire game and unsurprisingly kicked the crap out of the Eagles in a basically meaningless 51-26 win in the season finale. Both teams had already made the playoffs going into the game. 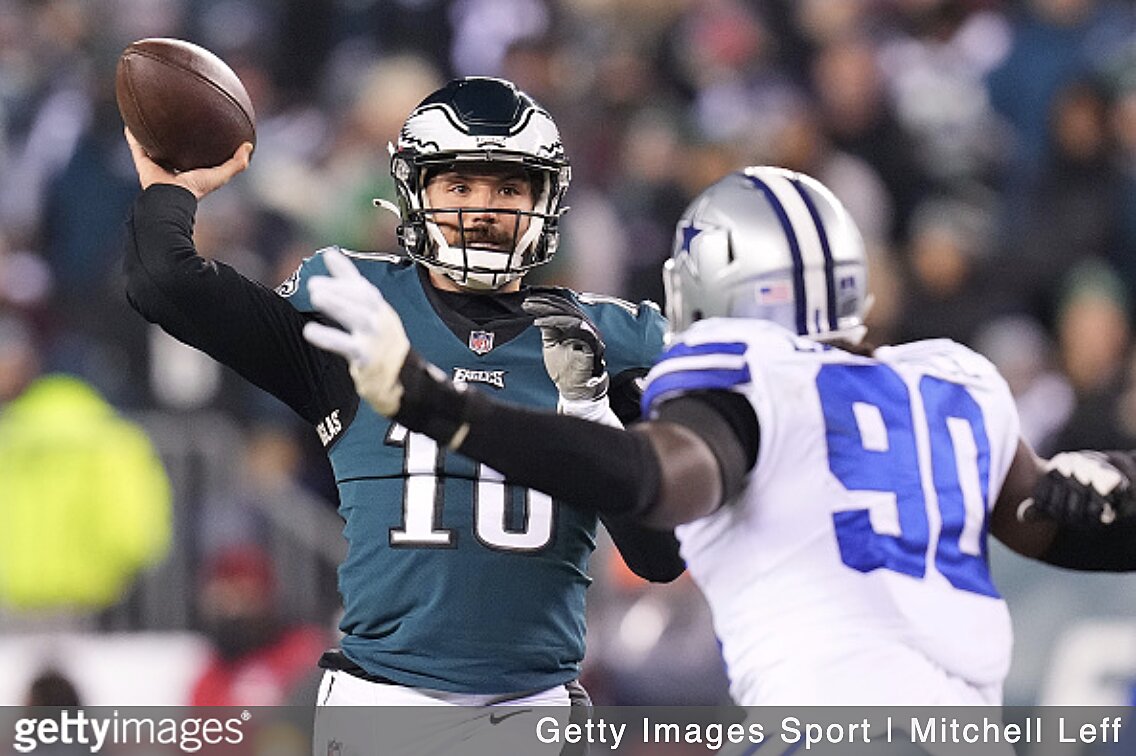 1 .Talk about a contrast of coaching decisions. Nick Sirianni benched most of his starters. Mike McCarthy played his. In the end, the divergent approaches probably worked best for both. The Eagles rested their starters in preparation for a playoff run. I don’t suspect the week off for starters will hamper their momentum. The Cowboys got the confidence they sought coming into the game.

2. The Eagles’ offensive line, made up of second and third stringers, held its own early against a Dallas defensive front that featured almost all of its impact players. Obviously, Micah Parsons’ absence made a difference for Dallas, but the Eagles still ran the ball 33 times for 149 yards an averaged 4.5 yards per carry. Starting to think Jeff Stoutland isn’t just an excellent offensive line coach but also a miracle worker. Brett Toth at center? Who saw that coming?

3.  Nice to see DeVonta Smith get the Eagles’ rookie receiving record, finishing with three catches for 41 yards to finish the 2022 season with 916 yards, four more than DeSean Jackson’s 912 in 2008. But overall, it’s still disappointing that the Eagles couldn’t get the ball to another wideout downfield even after Smith went out. Jalen Reagor and JJ Arceaga-Whiteside combined for six targets, with Reagor catching two passes and Arcega-Whiteside catching none but still becoming a storyline by having a ball bounce off his chest and go through his arms in the end zone for a terrible drop. Quez Watkins caught five passes for 84 yards and his first touchdown, taking a short pass and going 36 yards to pay dirt, but in general, all of his catches were from short passes.

4. Are the Cowboys in trouble? Sure, they dropped 51 points, but the game was tied at 17-17 late in the second quarter before the rails came fell off. Cowboys starters on defense were pushed off the ball early against the Eagles’  mostly backup offense. The Dallas run game, which hasn’t functioned well over the past few weeks, got off to a slow start. Their whole objective was to get straight and gain confidence. Maybe they accomplished that goal by the end, but they couldn’t have felt great about the game being tied late in the second quarter.

5.  I said on the ITB pregame show that I didn’t think Jason Kelce was the type to play a snap just to keep a record going. I was wrong, but I’m not ripping the decision. Kelce’s record of starting 122 straight games is a terrific achievement and it’ll be remembered along with the rest of his great accomplishments when his career is done.

6. Maybe the best takeaway from the game from an Eagles standpoint is Kenneth Gainwell’s 78 yards on 12 carries, an average of 4.5 yards per carry. He showed the explosion and running acumen that he doesn’t normally have an opportunity to showcase on his limited snaps, and that’s good because he could be summoned for a larger role in the Wild Card round. Miles Sanders isn’t guaranteed to be back and Jordan Howard, who looked tentative against Washington, probably won’t be 100 percent when the Eagles play again.

7. Sucks to see Tyree Jackson leave with a knee injury. Turned his first career catch into a touchdown, a nifty shovel from Gardner Minshew. Jackson wasn’t likely to make an impact on the Eagles’ postseason run but he needs this offseason to keep learning the position and get ready to compete to be the No. 2 tight end next year. A long-term injury that could keep him out of OTAs and training camp would set that process back.

8. Saw some fan reaction that expressed disappointment that Jonathan Gannon didn’t blitz more or come after Dak Prescott. I’m not ripping the guy. The Eagles entered that game with one goal, getting their starters healthy. They played a ton of backups, some who haven’t sniffed the field this year. You had to expect that Gannon was going to play it safe.

9. Milton Williams put in two tackles for a loss and a quarterback hit as he continues to improve over the course of the season. He played tackle and end, as he’s done a few times this season. He’s clearly surpassed Hassan Ridgeway as the No. 3 defensive tackle and his future looks bright. Good to see Smith, Landon Dickerson and Williams all contributing for the team.

10. The networks love putting the Eagles on prime time, so be prepared for a Saturday or Monday night game for the Wild Card round. If they’re playing Tampa Bay, as most models predict it’ll be based on probability, I’d be stunned if the game wasn’t on prime time.