For Some, Truth Hurts In QB Debate

No Controversy For Birds Signal Caller

If you want to spend the next two weeks arguing Jalen Hurts vs. Gardner Minshew, go ahead. That’s your right.

Nowhere in the sports Bible does it say you’re not entitled to your opinion, as groundless and moot as it might be.

And it’s certainly moot given how quickly Nick Sirianni moved after Sunday’s 33-18 win to declare that Hurts, when healthy, remains the starter.

But that won’t stop some – many, even – from screaming bloody murder from the mountaintops, insisting that that Sirianni is wrong, Minshew is better and the Eagles are doing a disservice to their fan base and playoff chase by sticking with Hurts.

If you’re in agreement, fine. But at least be willing to accept some proper context to your argument. 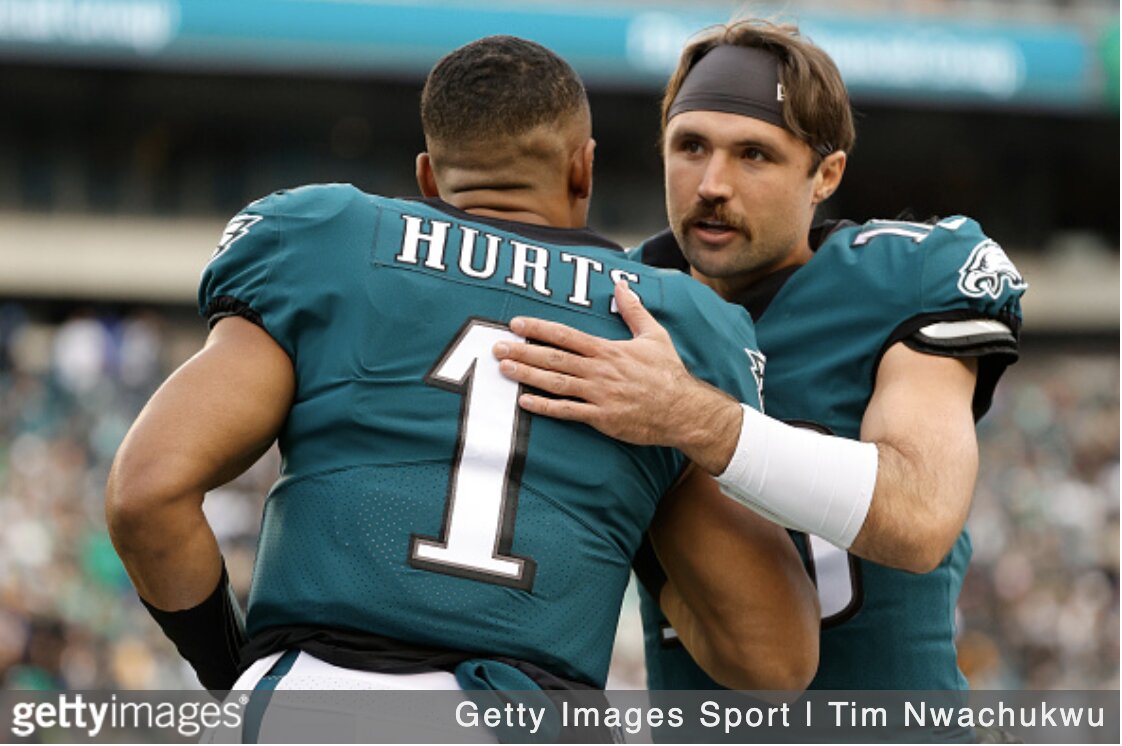 Minshew sliced up the hapless Jets secondary on Sunday, completing a staggering 80 percent of his passes and tossing two touchdowns. He didn’t turn the ball over, found the right windows, and guided the offense to scores on the team’s first seven drives.

That the Eagles didn’t punt until their final possession and possessed the ball for more than 11 minutes longer than the Jets did truly illustrated the level of offensive dominance executed by Minshew, head coach Nick Sirianni’s play calling, and another overwhelming effort from the Eagles’ offensive line and run game, which churned out 185 yards on the ground.

Naturally, because the backup quarterback is always the most popular athlete in Philadelphia, and because Hurts happened to stink up the joint the prior Sunday against the Giants in a 13-7 loss, Minshew’s status has become a polarizing debate topic for those who believe he should leapfrog Hurts into the starting role as the 6-7 Eagles chase a wild-card berth.

The passing game looked much more crisp with Minshew leading the huddle, they say.

Sure, there’s some merit to that observation.

And if quarterbacking was a constant, static, unvaried process that produced identical outcomes week after week, naturally Minshew and his accurate arm, decent pocket mobility, and preference for spreading the ball would be the ideal fit for Sirianni’s West Coast offense.

But quarterbacking is not a constant, static, unvaried process that produces identical results week after week – or else Hurts would’ve locked up the full-time job after he competed 77 percent of his passes, tossed three touchdowns, and compiled a 126.4 passer rating in Week 1 against the Falcons.

Or perhaps after he guided the Eagles to scores on seven consecutive possessions against the Lions in a 44-6 win in Week 8.

Didn’t hear too many calls for the backup after those wins, eh?

That’s were context matters and, for some, is also completely absent.

Minshew proponents have a luxury right now that Hurts defenders don’t – the lack of an accurate sample size to make any realistic determination about a quarterback’s true acumen.

The Jets even admitted after the game they spent the entire week preparing for Hurts and for “the Eagles’ offense,” which hadn’t been executed by anyone other than Hurts until Sunday.

The idea that one, shining moment against an NFL bottom feeder translates to Minshew holding the key to unlocking the Eagles’ average passing offense is myopic, at best.

Just know this about those Flip-flop-adelphians demanding a change: Just two weeks ago, after consecutive wins against the Broncos and Saints, these same folks were anointing Hurts as the franchise savior.

They’d also be the same ones clamoring for Hurts after the first Minshew loss.

Let’s try to resist the temptation to put Minshew in Canton after one game.

Several of his passes, including the 25-yard touchdown to Dallas Goedert, were underthrown. Fourteen of his 20 completions — 70 percent – went to running backs and Goedert, as the Eagles took their screen game to an entirely new level against an unprepared and step-slow Jets defense.

Hurts has come under the microscope all year, even in wins, for issues pertaining to ball placement, arm strength, or an offense designed around one-read and no-read schemes.

The same scrutiny should apply to Minshew, who’s arm is average, at best, and who was asked to make very few challenging throws in his emergency start.

Without seeing how he’d perform against a defense that truly prepared for him, came after him, and forced him to drive the ball when pressured, it’s impossible to know if he’d really give the Eagles a better chance down the stretch against Washington, Dallas and even the Giants’ defense.

Even if he’s a more pure pocket passer, is it enough to compensate for the mile-wide gap between the two quarterbacks’ athleticism and ability to move the chains with their legs?

The only way to truly answer that question is to have Minshew start those games, which would completely abort the team’s mission of exploring whether or not Hurts is the long-term answer.

Yes, the goal should be to make the playoffs. The more important objective is determining whether Hurts is the guy who can lead the Eagles to a playoff berth.

Claiming the final wild-card berth while swapping starting quarterbacks would only make the Eagles the 2021 version of the Bears, who last year grabbed the seventh seed at 8-8 despite their shell game that saw Mitchell Trubisky benched for Nick Foles, who eventually got benched for … Trubisky.

You might not agree or accept this, but the Eagles didn’t embark on 2021 – after firing their head coach and trading away their disgruntled franchise quarterback – looking to find out if the guy they flipped a sixth-round pick for in August can become their franchise cornerstone.

If the answer isn’t Hurts for 2021, it’s still not going to be Minshew.

If that was even a glimmer of an option, Minshew would’ve seen the field when the Eagles fell to 3-6 after losing to the Chargers.

Minshew has an opportunity to carve his niche as an ultra-reliable backup who can win games when summoned. We’ve seen this before, from Bobby Hoying to A.J Feeley and Jeff Garcia to Nick Foles.

You’ll notice the trend there: Each of those backups were at one point the most popular athlete in the city. Some of them were even billed as “the guy” with whom the Eagles should move forward.

You’ll also notice that none experienced even close to the same success after they moved on elsewhere.

If any franchise has taught you that, it’s this one.