Drop Of The Heap

The Eagles’ push to make the postseason was dealt a severe blow Sunday as they stumbled and played sloppily against the Giants in a 13-7 loss at MetLife Stadium.

Thanks to four turnovers and some painful drops, including one by Jalen Reagor at the goal line on the game’s final play, the Eagles had trouble generating offense and had their two-game win streak snapped. They also failed to get to .500, falling to 5-7, while helping their division foes regain some momentum. The Giants improved to 4-7.

Reagor dropped two deep balls from Jalen Hurts on the Eagles’ final drive, including a pass that found him at the goal line but bounced off his helmet. The Eagles are back at MetLife Stadium next Sunday to face the New York Jets. 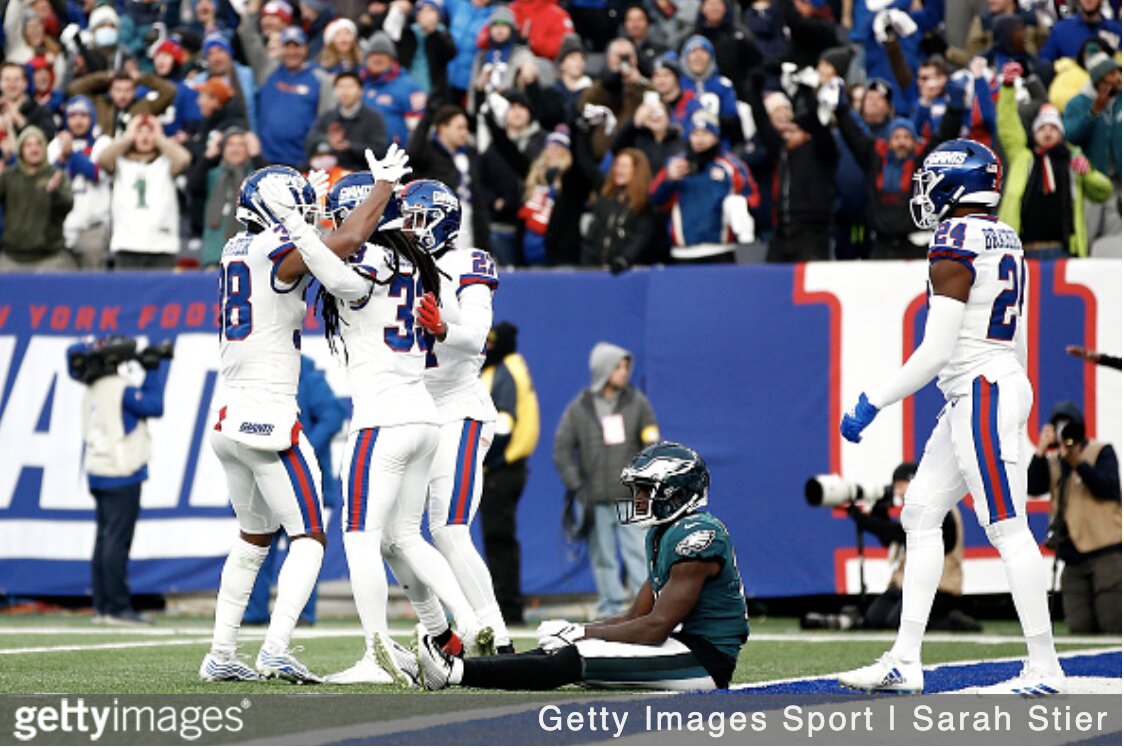 1. The game will be remembered for Jalen Reagor’s drop. Well, both. And it’s true, Reagor’s inability to catch the ball twice prevented the Eagles from tying, and probably winning, the game. But there’s also a lesson learned about overall sloppiness on the road against a division team. Boston Scott fumbled. Greg Ward dropped a touchdown pass. Jalen Hurts threw three picks. Nate Herbig’s holding penalties called back a touchdown and first-down run. You can’t bring your C+ game on the road against a division opponent and expect that it won’t come back to haunt you. The playoffs are still within reach, and probably will be for the next few weeks, but this loss represented a big step back.

2. I’ve said for a for weeks, and I believe more than ever, Jalen Reagor needs a change of scenery. His drops are on him, no doubt. He had two chances to change the narrative and failed on both occasions, but it’s not like Reagor has seen a steady diet of targets all year long. His seven targets against the Giants were more than his total targets from the prior three weeks combined – combined! There’s no rhythm or connection between he and Hurts. If the Eagles are committed to Hurts beyond 2021, it’s hard to see them also being committed to Reagor, who definitely needs to improve, but I could also see Reagor coming into his own on another team that has a more balanced offense and experienced quarterback.

3. The Giants seemed to borrow from the Saints’ playbook in how to defend Hurts as a passer. Their edge rushers maintained wide rush lanes, like Saints edge defenders did, which were intended to keep Hurts from breaking outside the pocket. The Giants also funneled extra pressure in the middle for when Hurts stepped up into the pocket and looked to run. Sometimes, it worked. Sometimes, Hurts still managed to break away. In general, opponents will trade a few broken plays to keep Hurts from killing them outside the pocket.

4. The Giants also occasionally blitzed from the nickel back and cornerback positions, again using extra edge pressure to keep Hurts from running outside the tackles. Those are opportunities when the quarterback can strike big plays, but Hurts apparently didn’t see the late blitzes or didn’t look for hot-route receivers on those pressures. That’s either on him or on the receivers, who need to see their defenders showing blitz and signal to the quarterback. It could be on both, but watch for that going forward as it clearly was a strategy that caused Hurts to hold onto the ball too long.

5. The overall lackluster pass game illustrates this team’s issue with having more than one or two pass catchers have a good game on the same day. The Giants appeared to focus attention on DeVonta Smith and, at times, doubled Dallas Goedert off the line of scrimmage. Quez Watkins made a nice 19-yard grab and Reagor actually reeled in a 21-yarder that seems like a who-cares moment right now, but in general, there wasn’t much of an impact in the passing game from secondary pass catchers. Watkins might have been the culprit on Hurts’ first interception. He appeared to buckle from contact on his route. Maybe he was expecting a flag. Either way, he appeared to just stop running his route, which resulted in Hurts’ lead pass getting picked.

6. Hurts had a few throws that weren’t complete because of timing. He held onto the ball too long or just made a bad decision. His interception before halftime was a terrible decision from the start. It’s 3rd-and-goal. He’s forced to out the right. Chuck the ball out of bounds and let Jake Elliott get you three. A turnover was the worst thing that could happen there. That looked like a Carson Wentz circa 2020 interception. Hurts has mainly avoided really bad turnovers like that. His second interception – on a deep throw to Reagor – was thrown at least two seconds too late. He had plenty of protection, stepped up in the pocket but threw a very high-arcing pass that allowed the defense to cover ground. By the time the ball found Reagor, two Giants were already around the ball, and Xavier McKinney picked off the underthrown ball. Hurts just doesn’t have the kind of zip to make that play unless he times it better.

7. The rushing offense missed a downhill element without Jordan Howard and wasn’t as impactful as the past four weeks, but that’s not what lost the game. The Eagles still rushed for more than 200 yards and averaged more than 6 yards per carry, but the Giants kept the breakout runs to a minimum – Miles Sanders’ 27-yarder was the longest – and were able to force the Eagles into enough third-down situations to get stops. Should coach Nick Sirianni have dialed up more run? Did he lean a little too heavily on the pass? Maybe an argument can be made there, but this time execution on all fronts just wasn’t crisp. Their 33 rushing attempts were just six behind their total attempts against the Broncos and Chargers. As we’ve mentioned on Inside The Birds, there was going to come a time when the Eagles had to open the offense up.

8. A few weeks ago, the Eagles were deploying a much more conventional run game that used under-center concepts to get the downhill rushing attack going. Their offense has since evolved into a shotgun, zone-predominant scheme that functions off QB runs, which have become more prevalent since the Denver game. Hurts gashed the Saints’ top-ranked offense with designed runs and zone reads, and he did the same to the Giants, running for 77 yards. His runs in the third quarter set up Boston Scott’s wide-open 12-yard to near the goal line, which turned into a Scott touchdown. Hurts’ running is what’s opening lanes for the other ball carriers, which is nice if you’re the Ravens, but Lamar Jackson is also an improved passer. Hurts is still developing there.

9. The touchdown catch by Giants tight end Chris Myarick is still baffling. Replay appeared to show the ball touching the ground while not being possessed, but every touchdown is reviewed in New York City, so they must have felt the video didn’t present concrete evidence to overturn. But on the flip side, that’s a really hard touchdown to uphold when it didn’t appear as if there was a clear possession of the ball.

10. So much for the Freddie Kitchens impact on the Giants’ offense. For all the talk about Kenny Golloday’s bigger role, the Giants receiver had three catches for 50 yards, a longest of 18 yards – a decent game, but nothing outstanding. Darius Slay was once again brilliant in coverage, breaking up a pass in the end zone to prevent a touchdown. The Giants got 20 yards early on a nifty tight end screen to Evan Engram and 32 yards on a good run by Saquon Barkey. But they were only 3 of 12 on third down and really screwed up trying to take time off the clock on their final drove. The Eagles are going to remember this loss for a while. They had chances.