Fueled by a lethal rushing attack and fast-flowing defense, the Eagles on Sunday upended the visiting New Orleans Saints, 40-29, stacking consecutive wins for the first time this season and their first win at the Linc in nearly a year.

Unearthed in Detroit four weeks ago, the overpowering Eagles running game has proven to be an effective remedy to a largely disjointed offense.

It’s also diverted attention from a vilified defense that’s also made strides over the past three weeks under the direction of first-year coordinator Jonathan Gannon.

In a significant showdown against the Saints, Gannon and his unit unveiled a revised blueprint from on the opening drive.

With  the Saints facing 3rd-and-11 from their 35-yard line, quarterback Trevor Siemian was forced to hastily heave a pass over the middle in the direction of wide receiver Deonte Harris as a blitzing Avonte Maddox bore down.

The incompletion forced a punt on the opening possession, but more importantly set a tone of aggression that Siemian and the New Orleans offense would encounter frequently. 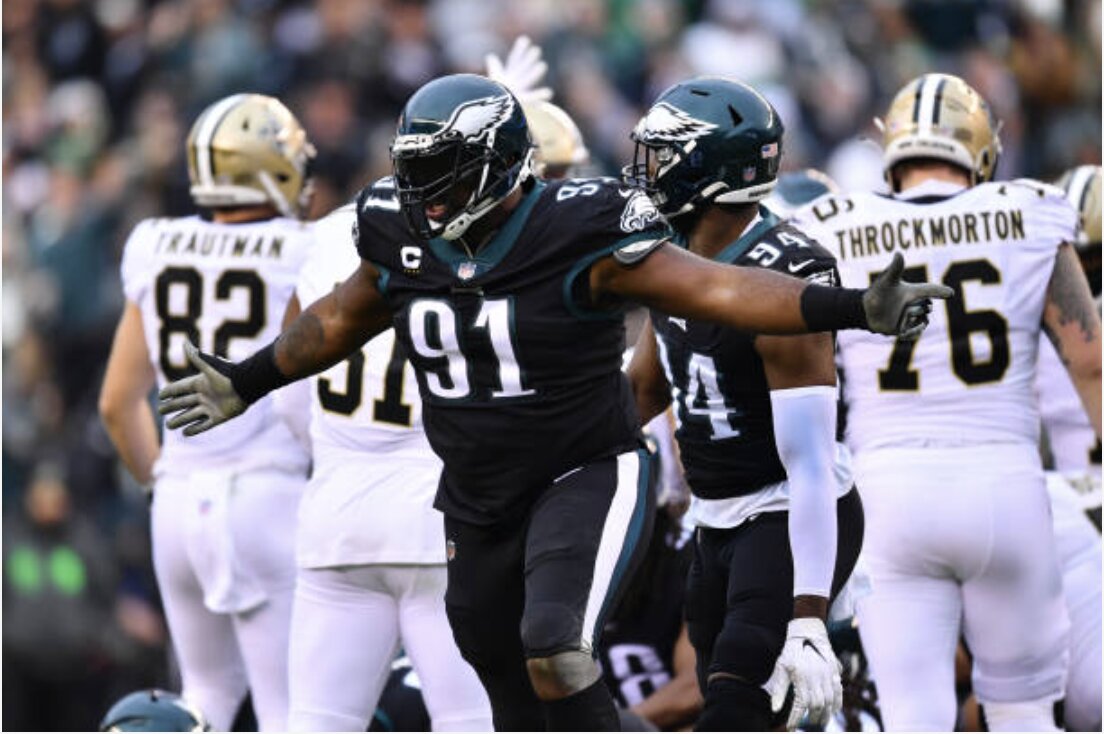 Deploying extra rushers has been an interesting new wrinkle under Gannon, who only recently exhibited a willingness to pivot from his timid, read-and-react philosophy.

While Gannon’s decision to apply consistent pressure failed to generate a sack, the approach still resulted in five quarterback hits. More importantly, it expedited Siemian’s reads and manifested itself in the form of two takeaways.

In fact, it was pressure from veteran defensive end Ryan Kerrigan, who’s been M.I.A for much of the season, that resulted in Siemian’s first interception of the season.

On the Saints’ second possession, Kerrigan drove a pulling Garrett Griffin into Siemian’s line of sight. Somehow, the quarterback managed to loft a pass towards tight end Adam Trautman, only to watch the ball end up in the hands of Eagles linebacker T.J. Edwards.

“Honestly, I was just reading the quarterback’s eyes and kind of saw the over route coming behind me, and you know, just made a play on the football,” Edwards recalled after the game. “But the rush was getting there, so we knew [Siemian] had to get it out quick. And yeah, just made a play. So, everything else was locked up, and he had no choice but to try to fit it in. Finally got [an interception], so it felt good.

Edwards, the third-year linebacker, combined for a team-leading 10 tackles – including one or loss — two passes defended, and a fumble recovery, to go along with his interception.

Since being inserted as the team’s starting MIKE linebacker four weeks ago in Detroit, Edwards has accounted for 44 tackles, three tackles for loss, three passes defended, a fumble recovery, and quarterback hit.

His presence has infused an underwhelming second level with sorely needed physicality, tenacity, and take-no-prisoners mentality.

“[T.J.] is really playing well,” head coach Nick Sirianni said after the game. “I think our defense as a whole is playing well. I don’t want to single anybody out because I think they’re all playing well. Starts up front. T.J. brings a physicality that really is contagious. And he continues to come after the ball.

“And he’s a good communicator with the defense and talking to everybody. And sure, those guys from Wisconsin, that played as a Badger, my experience with those guys is they’re tough and they’re nasty and they can play physical ball. I’m sure glad he’s playing the role he’s playing right now.”

The back end of Gannon’s defense also appears to have adopted a more aggressive approach, whether it’s challenging receivers at the line, forcing quarterbacks to fit the ball into tighter windows, or coming down against the run.

Veteran safety Anthony Harris, who not long ago would be positioned so deep you’d think he was patrolling the Wells Fargo Center parking lot, blew up tight end Adam Trautman on a failed screen attempt for a 6-yard loss and then held shifty wide receiver Deonte Harris to a 2-yard gain on a similar play to the opposite side during a critical fourth quarter series.

Slay also logged a tackle for loss and two passes defended in the blowout win, as he makes his bid for the fourth Pro Bowl of his career.

After navigating growing pains that placed him under intense scrutiny through the first half of the season, Gannon has finally found the right marriage of scheme and personnel, enough to conjure a winning formula on three of the past four Sundays.

While complementary football has generated optimism for the future — none of the Eagles’ next five opponents is over .500, including their next game against the Giants — the message inside the locker room has remained the same.

“Right now it’s just focusing on a big game coming up – a division game – basically, I think the rest of the games are divisional. We just have to continue to focus on what’s important and just take it one game at a time.”