Dismissed as an afterthought merely three months ago, Marcus Epps’ pursuit of an elusive roster spot appeared to be a daunting proposition.

Epps has since gradually blossomed into an integral component of a defense that remains under construction.

While coordinator Jonathan Gannon continues to modify a largely fluid scheme, the first-year play caller instituted another notable wrinkle Sunday against the Denver Broncos, working Epps into the safety rotation, sometimes at the expense of veteran Anthony Harris.

“We feel like those guys are doing a good job,” Gannon said Tuesday. “So, we feel like, dependent on how we set up the game plan, certain packages, certain calls that we have in those packages, we like to try to put our guys in certain spots to where it suits their unique skill set.

“And like I’ve said all along, that room is doing a really good job. And if they’re playing winning football, we’re going to figure out a way to get all those guys on the field.” 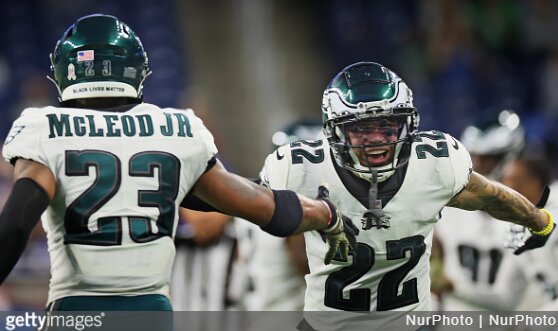 Harris still accounted for 84 percent of the team’s defensive snaps compared to Epps’ 34 percent, but one would be remiss to ignore the steady impact of the latter. It almost feels inevitable to expect a full-on platoon in coming weeks.

The 25-year-old Epps has started three games this season – one for an injured Rodney McLeod and two in place of an injured Harris – in addition to duplicating a career-high in snaps (66) and accounting for 100 percent of the defensive total against the Raiders and Lions in consecutive weeks.

But it wasn’t long before Gannon pivoted to his trusty third-year safety.

“I just felt like both of those guys have played that spot and I wanted to see what Marcus could do in there a little bit,” Gannon had said last week. And [Chachere] came in and played OK for us.

“But Marcus has been playing winning football for us and I wanted to get him on the field with some other guys.”

Don’t forget, it was Epps who also appeared to secure a second quarter interception off Tom Brady on Thursday Night Football that nearly turned the tide against the defending Super Bowl champion Tampa Bay Buccaneers.

Of course, like many young players, Epps has also endured his growing pains during his young career. It was Epps who came under intense criticism after surrendering a game-sealing, 36-yard completion on a must-have 3rd-and-10 to Seattle Seahawks wide receiver D.K. Metcalf in the 2020 Wild Card matchup.

Against the San Francisco 49ers last season, it was Epps who served as a human hurdle to a dashing Brandon Aiyuk’s 38-yard touchdown on Sunday Night Football.

Early blemishes aside, however, Epps has rounded into form in his third season.

As a one-time walk-on at the University of Wyoming, non-NFL Scouting Combine invite, and former sixth-round pick of the Minnesota Vikings, Epps has had plenty of his own hurdles to clear just for an opportunity to play on Sundays.

Through 10 games this year, Epps has racked up 351 defensive snaps, accounting for just over 51 percent of the team’s total, while also accumulating the fifth-most special teams snaps (158) and serving as a core member for another first-time coordinator in Michael Clay.

Combining football intellect, instinctiveness and eye discipline, Epps has managed to overcome his lack of prototypical size and range to find his footing at the pro level, parlaying those intangibles into steady playing time under two different defensive coordinators.

Much like his predecessor, Jim Schwartz, Gannon views Epps as a capable substitute.

If Epps continues to play winning football, he could become part of the long-term solution.