Though it registered as a mere footnote in defeat, the rekindled chemistry between quarterback Jalen Hurts and wide receiver DeVonta Smith last Sunday against the Los Angeles Chargers served as one of the positives to be gleaned from an otherwise disappointing 27-24 home loss.

The special connection yielded 116 yards and a touchdown — Smith’s first since the Week 1 blowout in Atlanta — but more importantly revived a sluggish passing game.

One week later, that same combination sparked an explosive first-half aerial attack that catalyzed a compelling 30-13 Eagles victory Sunday over the Denver Broncos at Emperor Field at Mile High. 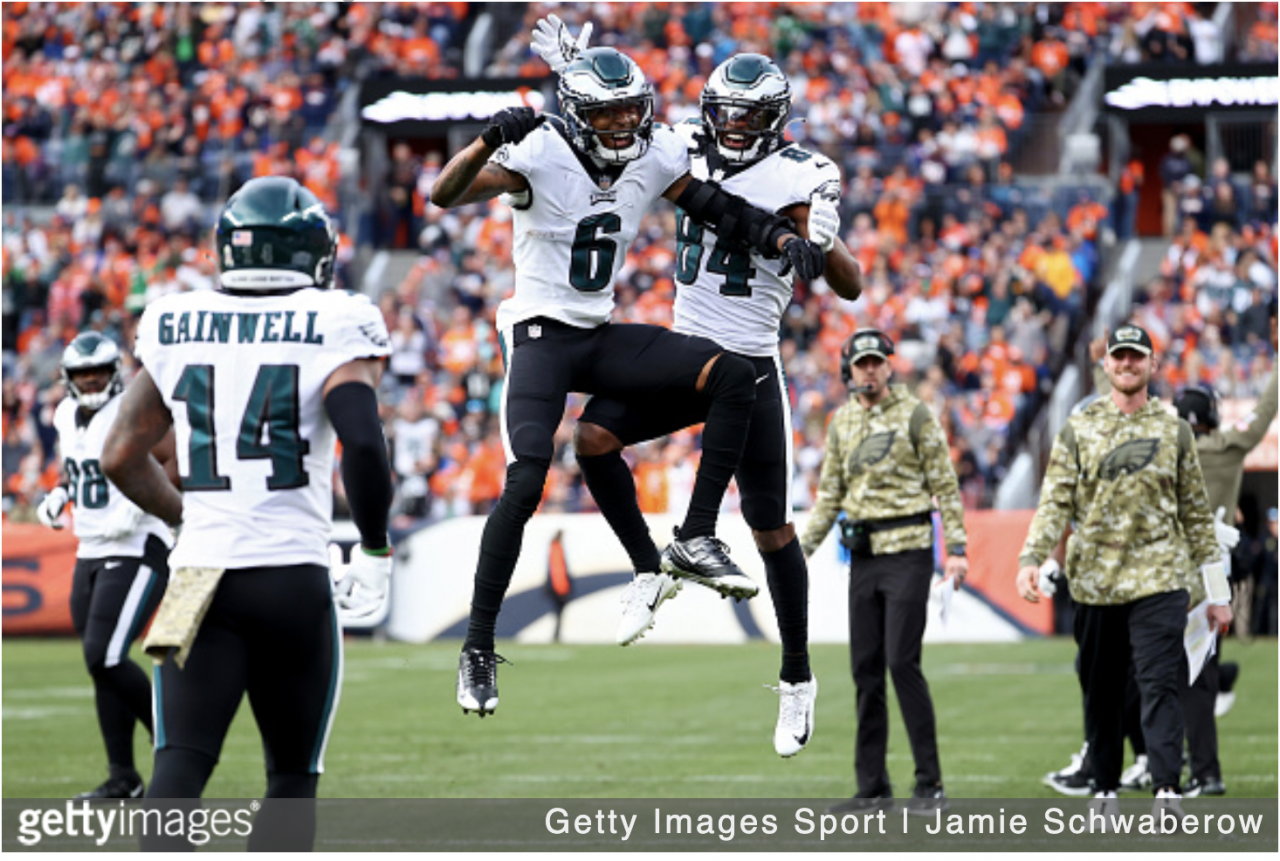 Smith, on his 23rd birthday, reeled in four passes from quarterback Jalen Hurts for 66 yards and two touchdowns on six pass targets.

“He’s just a good football player,” coach Nick Sirianni said of his team’s first-round pick. “He ran some really good routes today, too. He showed it both ways [Sunday], and Jalen was able to get him the ball. This was a good game by Devonta. He played his tail off.”

In an effort to establish offensive cohesion and stability, and with the season essentially on life support, the coaching staff drastically altered its pass-happy philosophy two weeks ago, unearthing an Eagles ground game that generated 85 carries for 412 yards and six touchdowns over that span.

But a functional passing game would be required to combat a stout Denver defense.

The Eagles offense engineered an assertive opening drive — which called for five running plays and four passes — but were forced to settle for a 30-yard field goal from Jake Elliott after the possession stalled at the 12-yard line.

It wasn’t until the second series that the Eagles made Smith a focal point.

With 5:21 to play in the opening quarter, Hurts marched the Eagles into Broncos territory with a 24-yard completion to tight end Dallas Goedert, who left to have his head examined and never returned, leaving Smith to shoulder the burden of the passing game.

Three plays later, Hurts rolled right and heaved a strike down the sideline, where a leaping Smith plucked the ball away from Broncos cornerback Patrick Surtain II, his former Alabama teammate, in the end zone to secure a 36-yard touchdown.

“The quarterback trusts me and gave me a chance to make a play,” Smith said after the game. “I mean, that’s what we always talk about, have trust in each other. And he trusted me.”

Following an extended review, the replay official signaled the touchdown that stretched the Eagles’ lead to 10, but the touchdown underscored Smith’s ability to win in a contested-catch situation while adding another element to their growing chemistry.

“DeVonta went up there and made a spectacular catch on the ball,” Hurts said afterward. “He got down, maintained possession of the ball and we got the touchdown. That was a big start and a big spark for us.”

Smith would later cap a 12-play, 75-yard drive with a 5-yard touchdown reception to extend the Eagles’ lead to 17-10 with 3:11 left before the break. Smith has three touchdown catches in his past two games.

The Hurts-to-Smith emergence has allowed the run-heavy Eagles to flip the script and lean more on the passing game when defenses adjust to their run. The No. 10 overall pick has impressed with his releases and route-running savvy and has become the go-to option, accumulating nine receptions for 182 yards and three touchdowns the past two games.

For perspective, fellow wide receivers Quez Watkins and Jalen Reagor have combined for just eight catches for 48 yards during that span.

While each throw from Hurts continues to be dissected and overanalyzed, the Eagles’ second-year quarterback has shown gradual improvement in key areas, including decision-making, ball placement, and pocket presence.

If the Eagles continue on this trajectory, Hurts’ ascent — coupled with Smith’s emergence — could feasibly position the team for meaningful late-season games.