How’s this for a plot twist?

When the Eagles needed a big play Sunday against the Broncos in Denver, when it appeared as if the Broncos were about to take momentum back, the Eagles came up with the most important play that secured their eventual 30-13 win – and it came on defense.

Darius Slay scooped a loose ball caused by Davion Taylor and returned the fumble 82 yards for a touchdown just as the Broncos were driving deep and looking to tie the game. The Eagles finally showed a heartbeat on defense against a legitimate offensive squad.

Jonathan Gannon’s group, which has been picked apart by quarterbacks for much of the season, held Teddy Bridewater without a touchdown pass, while Eagles quarterback Jalen Hurts tossed two touchdowns and added 56 more yards on the ground in one of his best overall games of the season.

The Broncos (5-5) trailed by a touchdown and were moving the ball on the ground until Melvin Gordon rumbled through the middle of the pile on a fourth-down pickup but got the ball jarred out of his grasp by Taylor, the second-year linebacker. Slay grabbed the bouncing ball, tucked it under his right arm, reversed course, and scampered downfield to hit pay dirt and put the Eagles up 27-13, which snatched the soul from the home Broncos.

The Eagles (4-6) then showed the Broncos how it’s done on the ground, as Jordan Howard and Boston Scott took turns moving the chains and draining the clock, quieting the Mile High crowd. 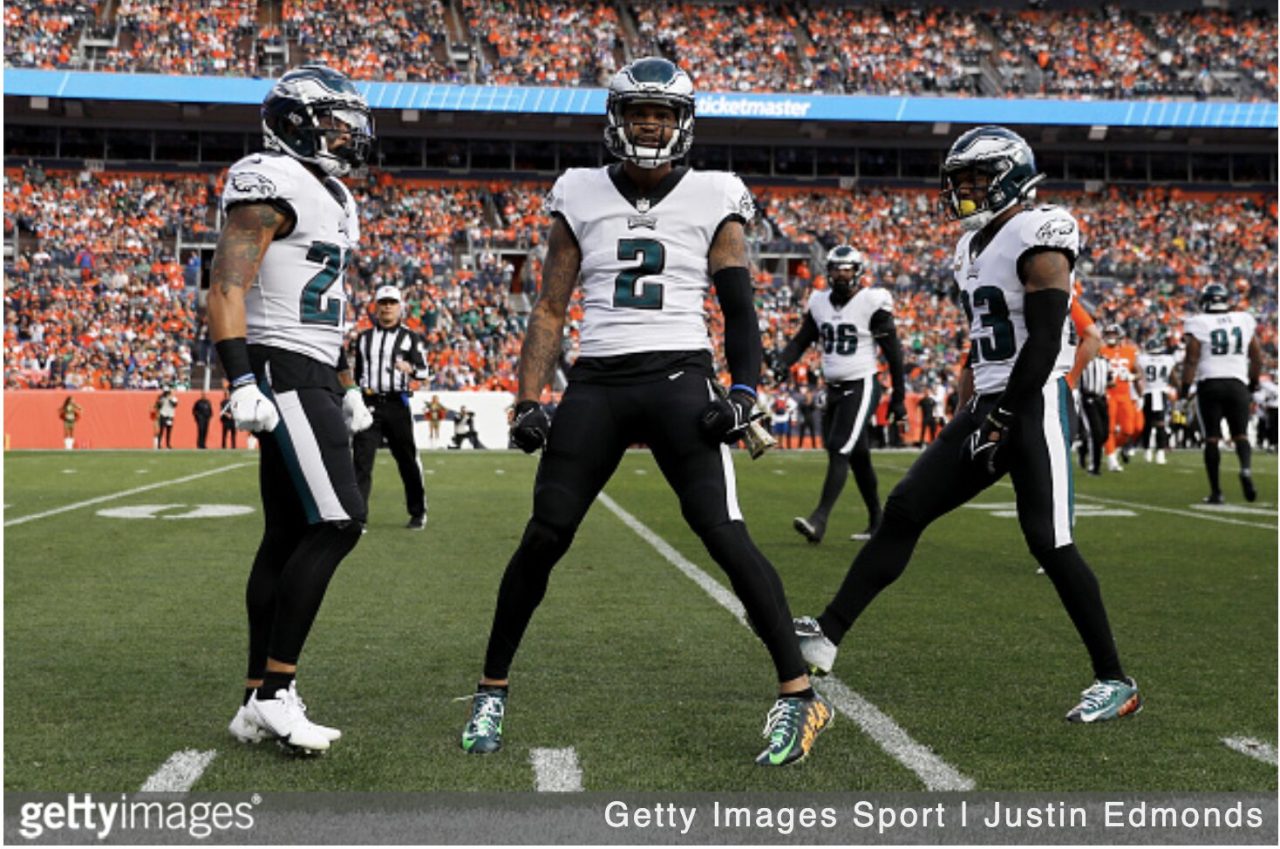 Darius Slay returned a fumble for a touchdown, the game’s most important play

1. Who knows what this win means in the long run. The NFL is such an odd week. This Eagles just humbled the same Denver team that humbled Dallas the prior week. The Cowboys responded by shellacking the Falcons by 40 points. Some will say this win represents a turning point for the Eagles. Maybe it will, maybe it won’t, but the Eagles come home to face a Saints team that’s lost two straight games by two points apiece. It’ll be the Eagles’ best chance to win consecutive games for the first time.

2. Credit to Nick Sirianni for his week-to-week adjustments since switching up his offensive scheme two weeks ago. He’s still emphasizing the run, but didn’t show the same formations that were beneficial over the past two weeks. Sirianni ditched the downhill style, predictable attack against Denver’s sixth-ranked run defense. The Eagles didn’t go under center nearly as much and didn’t try to win on the ground only. This might have been the most balanced offense Sirianni has put forth this season, with 40 runs and 23 passes, although some of Hurts’ runs were called passes.

3. The Broncos blitzed the Eagles early and often, as Broncos coach and defensive czar Vic Fangio has been doing more off to compensate for not having Von Miller and Bradley Chubb being hurt. Hurts was ready for the pressure, and Sirianni’s play calls and schemes gave Hurts opportunities to connect on both hot routes and chances to go deep. Sirianni’s calls also moved Hurts outside of the pocket on designed roll-outs to get Hurts away from the pressure and give him more time to keep his eyes upfield. Hurts also did a nice job of blending his run with staying in the pocket and making good throws. If Quez Watkins had actually caught the first-half bomb that went through his hands in the end zone, Hurts’ numbers would’ve looked even better. Hurts struggled a little in the second half when the Broncos played more zone, but was still impressive overall. Hurts completed 70 percent of his passes and registered a passer rating over 103.0.

4. This is a game that makes you wonder why the Eagles’ defensive line shows up some weeks and doesn’t others. Despite facing another quick-trigger quarterback, the Eagles’ front four generated way more pressure against Bridgewater and was more active up front against the run than the prior week against the Chargers, who like the Broncos, were also hurting on the offensive line. Fletcher Cox even made a stop behind the line of scrimmage. When the Eagles’ defensive line shows up, the defense from top to bottom is much more effective and the pressure is taken off the back end.

5. Also a nice job by the linebackers, with T.J. Edwards and Davion Taylor helping to keep Denver’s potent run game from taking over. The Broncos ran well but Edwards and Taylor were good enough create some third downs for Denver offense, which is where Bridgewater and Co. really struggled and where the Eagles’ pass rush helped out. Taylor got the strip on Melvin Gordon that Darius Slay recovered and ran back 83 yards for the touchdown.

6. Overall, defensive coordinator Jonathan Gannon didn’t do much differently. He played mostly zone and did some blitzing and man coverage but benefitted from an early lead. Denver also hurt itself with multiple penalties on offense, especially on a drive that ended in a blocked field goal and another possession that ended in a Brandon McManus field goal. The pressure from the front four, and some good talking over the middle, limited Bridgewater to a completion percentage of just 61.1 percent, which was well below his season average (70 percent) and obviously much worse than other quarterbacks have fared this season against Gannon’s defense.

7. DeVonta Smith really has become a treasure for the Eagles. On his birthday, the Eagles’ rookie caught two more touchdowns, giving him three over the past two games and five for the season. Playing with an elbow brace that made him look like a Cyborg, Smith hauled in amazing 36-yard touchdown catch against tight coverage by his former Alabama teammate Patrick Surtain. I’m not sure what Hurts was thinking on that throw other than, “Trust my wide receiver,” but it worked. Smith is on pace to break the franchise’s rookie receiving record (912) held by DeSean Jackson, and while Smith might not change how an offense operates the way Jackson did for Andy Reid’s teams, he already one of the team’s best route-runners in quite some time.To think, this is just the beginning.

8. The Eagles somehow pulled out this game without a No. 2 receiver. Tight end Dallas Goedert exited with a head injury early in the game, while Jalen Reagor and Watkins were only modest contributors. Still, the Eagles converted 6 of 13 third downs (46 percent), and were much better before the fourth quarter. It’s a testament to how well they ran the ball and Hurts’ good game. But they really need a second and third target to emerge if they want to carry over this momentum.

9. Might be time to start really thinking about limiting Derek Barnett’s snaps. I get the coaches thinking that they can’t bench him and go with Ryan Kerrigan and Tarron Jackson, because that hurts the team’s overall chance of winning. But Barnett is killing them with his penalties, and making fewer big plays, that it’s hard to see his presence as anything more than net neutral. Barnett did have a sack, but he’s only got two this season and he’s not coming back this season. Plus, quarterbacks are exaggerating their cadence to draw him offsides, and it’s working.

10. The Eagles didn’t wear down in the second half, as opposing teams do when making the adjustment to Denver’s altitude. Sirianni intentionally planned the team flight later than usual to make sure the Eagles weren’t even spending 24 full hours in the city in attempt to lessen the impact of the altitude change. He also tried hard during the week to downplay the psychology of the altitude change, which is noted everywhere at the stadium and in the media. Sirianni traveled to Denver once a year during his long stint as a Chargers assistant, so he was well versed on how to prepare the Eagles for the adjustment. The Eagles had lost their last three games in Denver by an average of 28 points going back to 1998, so a 17-point win there represented a major turnaround on the road for the franchise in this series.