Much of the initial intrigue surrounding the Sirianni hire stemmed from a resume that accentuated his prowess for developing wide receivers, at both the collegiate and professional level.

He also played the position through college before transitioning to coaching.

Naturally, Sirianni’s pedigree at the position kindled a keen eye for detail. While he gushed this week over the blistering speed and explosiveness of his pass-catchers, the Eagles’ head coach was also quick to call attention to a crucial element of the job that needs improvement.

“If I’m nitpicking one thing,” Sirianni said on Wednesday, “it’s that we’ve got to continue to get better on the contested catches that we need to make when it’s there.

“I’m not saying anything to you guys that I haven’t said to them, and so that’s where we’ve got to get better. But I’ve definitely seen improvement through all the other things, and I’m seeing improvement there. It’s just that’s got to take another step up to another level.” 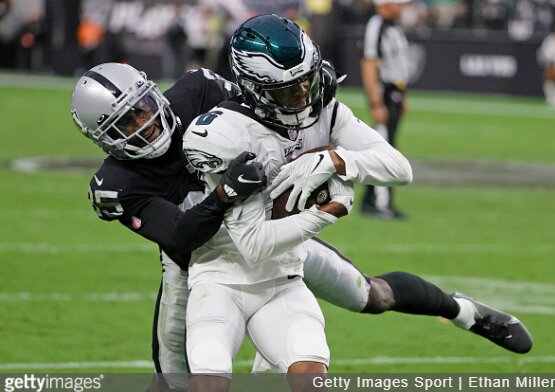 Eagles WR DeVonta Smith hangs onto a Jalen Hurts pass vs. the Raiders

The current crop of Eagles wide receivers comes with the requisite combination of speed, short-area quickness, and game-breaking ability, but also falls under the undersized, finesse category.

So far, Eagles receivers have appeared unequipped to win in most contested-catch situations.

Insufficient physicality on the perimeter, coupled with the glaring absence of a big-bodied interior receiver apart from tight end Dallas Goedert, has contributed to an underwhelming offense, rendering it passive and overly reliant on low-percentage shot plays.

The ability to make contested catches is not only an essential component to any functional offense, it also widens throwing windows for an erratic quarterback who’s struggling with ball placement and timing. Physicality also is an important factor for red-zone efficiency.

Not to suggest Eagles wide receivers are incapable of fighting for position against swarming defensive backs. Second-year wideout Quez Watkins has played his way into a more prominent role by demonstrating improved concentration and body control. Watkins has frequently revived a stagnant Eagles offense by coming down with an off-target throw to extend a possession.

Against the Cowboys, he snagged a 21-yard reception over the middle with linebacker Leighton Vander Esch draped all over him, a potential momentum-changer that was ultimately negated due to a holding call on Isaac Seumalo. Watkins later elevated to secure a 41-yard strike from quarterback Jalen Hurts over cornerback Maurice Canady despite interference.

Body control and concentration was also showcased on a remarkable 23-yard reception off a tipped pass against the Tampa Bay Buccaneers on a Thursday night.

“In this game, a lot of catches aren’t going to be wide-open catches,” Watkins said. “It’s going to be tough, contested catches. That’s the ones we get paid to make.”

Watkins has shown the most promise — and aggressiveness — when working through traffic to make a play, but former first-round pick Jalen Reagor has also shown a willingness to attack the football.

Facing a 19-point deficit to the Las Vegas Raiders on Sunday with about four minutes to play, the Eagles engineered a 12-play, 75-yard drive capped by Reagor’s 17-yard touchdown reception.

Hurts had eluded pressure, rolled right, and fired a pass to the leaping Reagor, who high-pointed the ball in front of linebacker Denzell Perryman and cornerback Amik Robertson before scampering in for the score.

“I got a 43-inch vertical, so if you throw it up, I’m most likely going to get it,” said Reagor, who also drew two pass interferences against the Bucs. “And I’m strong. In practice, we practice making tough catches, because we’ve got good [defensive backs] we go against every day. Really, Coach challenges the scout team to challenge every catch – even when we’re running with the ball – so just, like I said, practice.”

Though still learning on the job, Sirianni’s evolving wide receiver group has shown the ability to win at the line of scrimmage, vertically, and in short-to-intermediary areas on the field.

But in order for the group to fulfill its potential, it needs to step outside the comfort zone. Receivers have made some contested catches, but too many other opportunities have come up short.

Sunday against the Lions would be a good time, as the Eagles look to snap a two-game losing streak against a depleted Lions secondary.

“There are some things that you have to adapt to in the NFL that you don’t see in college, or you don’t see as second-year players,” Sirianni said. “That’s always going to be something we’re going to focus on, is catching that football when it’s not right where it’s supposed to be or where there’s a guy on your back.