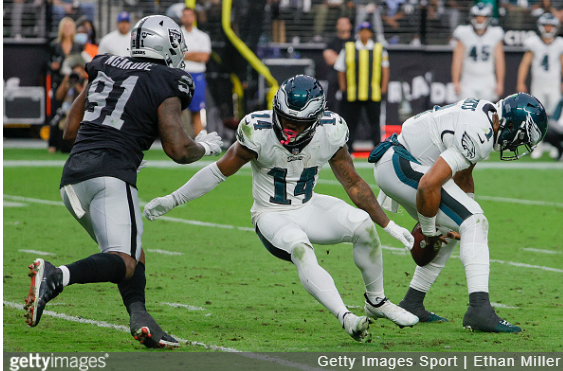 Facing a seven-point deficit with one-minute, thirty-eight seconds left in the second quarter, a reeling Eagles offense took the field, attempting to seize momentum before halftime.

Running back Kenny Gainwell, replacing an injured Miles Sanders, took the snap from shotgun and surged ahead for a 4-yard gain, but the crucial drive came to an instant halt.

Raiders defensive tackle Quinton Jefferson had navigated through the scrum to dislodge the football, which was recovered by teammate Johnathan Abram at the Eagles’ 29-yard line.

Upon further review, the replay official confirmed that Gainwell was not down by contact, and the Raiders parlayed the turnover into a Daniel Carlson 28-yard field goal to extend the lead to 10 heading into the break.

The turnover  could be considered the turning point in what resulted in a 33-22 Raiders win, and was a microcosm of squandered opportunities that have plagued the Eagles through the first six games and again in Las Vegas at Allegiant Stadium.

With momentum favoring the home team and the game essentially hanging in the balance, the Eagles opened the third quarter with a poorly-executed onside kick in an effort to prevent an insurmountable uphill climb.

The kick was recovered by Raiders fullback Alec Ingold at the Eagles’ 41-yard line.

Raiders quarterback Derek Carr then continued his dissection of a porous Eagles defense with completions of 21 and 7 yards to tight end Foster Moreau and wide receiver Hunter Renfrow, respectively, before the offense capped the abbreviated possession with a 4-yard touchdown run from running back Kenyan Drake.

While the offense struggled to find its groove after an impressive opening march, Carr and his host of weapons pounced on every opportunity to exploit defensive coordinator Jonathan Gannon’s passive scheme, extending the Raiders lead to 30-7 with 6:15 left in the third quarter.

The self-inflicted wounds persisted for the Eagles.

Aided by penalties enforced against linebacker Cory Littleton and cornerback Brandon Facyson, Eagles quarterback Jalen Hurts led the offense down to the Las Vegas 1-yard line, only to fumble away a 3rd-and-1 shotgun snap.

“Fumbled snap. I didn’t secure it,” Hurts said plainly after the game.

Though it appeared that the ball grazed a pulling Jack Driscoll, Hurts took full accountability.

Still, the weekly miscues and costly mental errors continue to derail the Eagles’ momentum, but the assertive second-year quarterback knows he has to improve.