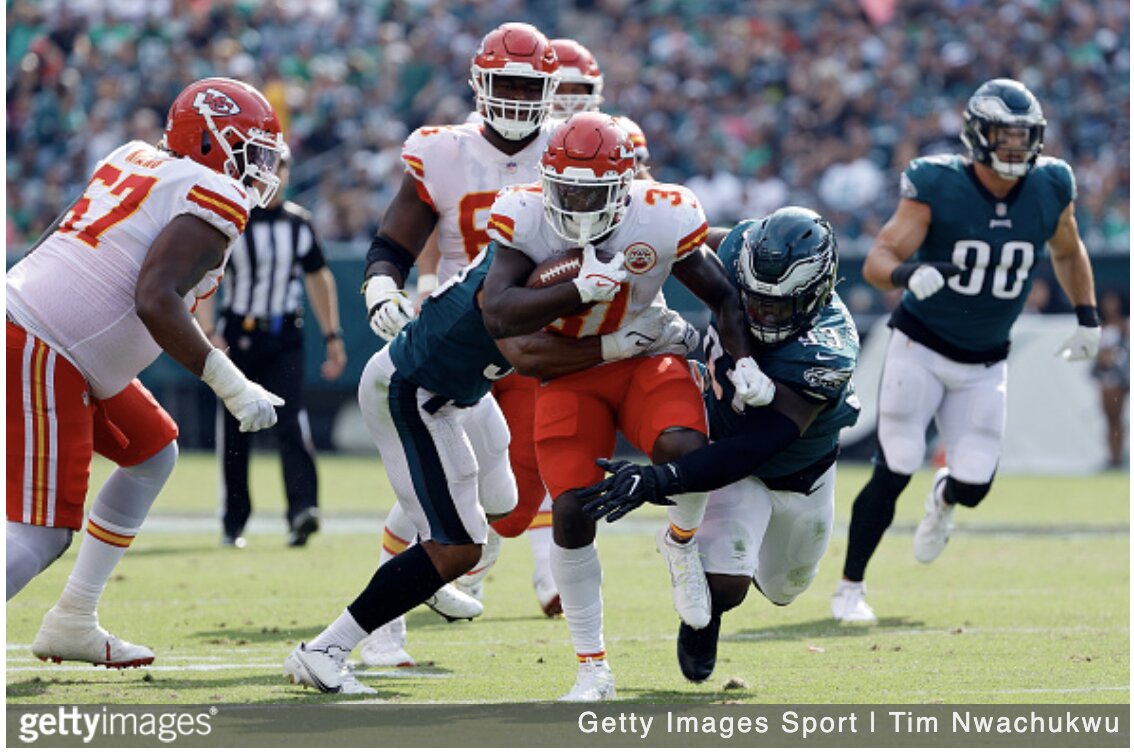 (When the Chiefs needed to march, they put the ball in the hands of their RBs)

There were times Sunday at the Linc where you could feel optimistic about the Eagles hanging with the high-powered Kansas City Chiefs and maybe even scoring an upset for first-year coach Nick Sirianni.

But then would come a penalty, or a third-down stop, or an inability to stop the run that would show the glaring difference between where the Chiefs are and where the Eagles are in terms of talent and readiness to be a contender.

Patrick Mahomes threw five touchdowns and the Chiefs scored six touchdown on seven possessions as they made it nearly impossible for Jalen Hurts and the Eagles to keep pace, as the Eagles 42-30 to lose their third straight game.

On the day the franchise honored LeSean McCoy, the Eagles helped make history for their former head coach who drafted the Pro Bowl running back to Philadelphia. Chiefs coach Andy Reid, who coached 14 years in Philadelphia, earned his 100th win as Chiefs head coach, making him the NFL’s first head coach to have 100 wins with two different franchises. He won 140 games as an Eagles head coach.

The familiar culprits resurfaced for the Eagles, who looked much better offensively than they had since the season opener, but were still victimized by penalties that negated touchdowns, penalties that extended Kansas City possessions and other mistakes that made for a long and frustrating afternoon.

1. Let’s begin with the obvious: You want beat the Chiefs, you’ve got to score points – and more of the seven variety than three variety. The Eagles moved the ball well but settled for field goals as penalties, and other mistakes relegated the Eagles to scoring touchdowns on of their first eight possessions, two on their first seven. Their ball-control offense help limit Kansas City to just three possessions in the first half, but the Chiefs scored touchdowns on all three possessions and five of their first six. For the second time this year, the Eagles had a long touchdown pass negated by the receiver who caught the touchdown first stepping out of bounds before coming back into play, this time the offender being rookie Devonta Smith, not Jalen Hurts.

2. Two Eagles touchdowns were wiped out by penalties. Story of the game? No, story of the season. Another illegal man downfield penalty on Andre Dillard wiped away a touchdown to Dallas Goedert in the second and a very questionable JJ Arcega-Whiteside interference call wiped out a touchdown to Zach Ertz in the third. The JJAW call, on a rub route, was very questionable as his pick against a Chiefs corner didn’t really pick the corner, who was able to get over to Ertz without impediment. But the Eagles are their own worst enemy, so they don’t get the benefit of the doubt. They entered the game with the NFL’s most penalties and kept going. Derek Barnett’s late hit on Mahomes kept alive a Chiefs drive that ended in a touchdown although in fairness to Barnett, he appeared to be blocked into Mahomes’ legs after the throw was made.

3. Because the Chiefs play mostly 11 personnel (three wide receivers, one tight end), Eagles defensive coordinator Jonathan Gannon employed a nickel defense for most of the game, taking that third linebacker – either Genard Avery or Patrick Johnson – off the field, but Gannon stayed with his predominant split safety looks, which again left the Eagles to defend the run with a light box. Once again they struggled. The Chiefs don’t have the patience or just pound the rock all day, so they didn’t exploit the run offense as much as Dallas did, but they certainly ran with success and at critical times. After the Eagles came within five at 21-16 in the third, the Chiefs countered with an 11-play, 75-yard march in which they ran the ball four times for 31 times – averaging almost 8 yards per carry – before Darrel Williams punched in a 1-yard touchdown run. Gashing the Eagles with the run has become old reliable for teams at this point. Heaven help the Eagles if Christian McCaffrey returns next Sunday for the Panthers. On their next possession, after the Eagles came within 28-23, the Chiefs countered another long march made possible by a run offense that picked up 53 yards on eight carries before Tyreek Hill caught a 12-yard touchdown.

4. I don’t know where Gannon goes from here. His porous run defense sets up easy play action for teams, and the Eagles are about to play Carolina, Tampa Bay and Las Vegas, teams with good-enough running games to make life even easier for those quarterbacks. Obviously, Tom Brady won’t be easy to stop, but Sam Darnold and Derek Carr are also playing well. Gannon seems content to play his defense and try to keep the damage in front, but that damage is being done easily. Personnel is obviously an issue, but where does Gannon go from here? If there were better players, he’d be playing them.

5. Well, at least we’ve seen some adjustments. Start with the run game. Sirianni, thankfully, didn’t do that thing where a coach gets hammered all week for doing something wrong, so then does the exact opposite to atone. Sirianni didn’t incorporate a heavy dose of runs into his game plan but he ran enough to keep balance and to keep Jalen Hurts and the offense ahead of the sticks, which was the right move because the Chiefs entered with a poor pass defense and were without defensive end Frank Clark. The balance helped stabilize the offense for Hurts, who looked much sharper and crisper than he did against Dallas and San Francisco. The 7-yard touchdown rugby Kenny Gainwell on 3rd-and-7 in the fourth was a gutsy call by Sirianni. Maybe he was just trying to set up a more makeable fourth down, but either way, Gainwell surged ahead for the score. The Eagles only ran 10 times but they scored 30 points and I wouldn’t pin their red-zone issues on play calls over penalties.

6. So is the lesson we’re learning that Hurts will fare better against bad defenses and struggle against the better ones? Or is the question more about Sirianni’s scheme? Once again, most of Hurts’ completions came from plays that were quick, scripted and timed to get the ball out to the first read. There were a couple of throws where you could see Hurts went to a secondary receiver. He found Gainwell on the left side in the second quarter for 14 yards on 3rd-and-4 after first looking first to his right. But most of his throws were came when the Chiefs presented 1-on-1 opportunities, of which there were plenty. We’ll see as the season progresses if Hurts can win enough from the pocket against better defense, and especially defenses that don’t blitz or present single matchups. The Panthers, up next for the Eagles, field one of the league’s best defenses early on, so that’ll be a major test. Hurts’ tendency to backpedal in the face of pressure and throw late

7. Sirianni sometimes comes off as an over-explainer or a Barney Fife behind the mic but there’s some method to his madness. All week he downplayed the concept of pre-snap motion and said the Eagles wouldn’t follow the league-wild trend of using motion just to keep with the Joneses. Then he came out against the Chiefs and used motion much more frequently than he did against Dallas and San Francisco. Sirianni also called for some under-center formations, including short-yard situations and QB sneaks, taking the RPO away in those situations. However … Sirianni helped blow a major opportunity on the final drive of the first half, not calling a timeout after Hurts unwisely dumped the ball to Gainwell on second down to keep the clock moving with less than 30 seconds to play. The Eagles tried to get assembled quickly, and the Chiefs brought pressure that wasn’t picked up, leading to Hurts getting sack-stripped and time running out as the ball got kicked around down the field.

8. I’ve constantly called for more creative uses for Jalen Reagor and for the coaching staff to use him the way Kyle Shanahan uses Deebo Samuel in the 49ers’ scheme. You did see some creative usage of the second-year wideout. The 2020 first-round pick took a handoff from motion in the first quarter and picked up 12 yards on an end around. In the third, Reagor returned his first kickoff of the year and showed his athleticism and speed, ripping off a 44-yard return. Maybe it’s a small step. The 44-yard kickoff gave the Eagles great field position, and combined with an Alex Okafor late hit penalty and Dallas Goedert 14-yard catch, set up the Gainwell touchdown that closed the deficit to five.

9. Pretty good game for an offensive line that started four backups and was only with center Jason Kelce as a normal starter. Sure, Hurts was under some pressure, but he also completed 28 passes and passed for almost 400 yards, so it wasn’t disastrous. I’ll have to see the tape for individual matchups, but the Eagles were able to score points and keep pace until midway through the fourth quarter.

10. Devonta Smith caught seven passes and for the first time in his career went over 100 yards (122). He could’ve done more damage if he stayed in bounds before catching that touchdown pass that would come back because of his penalty. But Hurts did a good job of getting the ball in the hands of his playmakers. Gainwell, Goedert and Ertz each logged more than 50 yards receiving. Again, this staff needs to get the ball in Reagor’s hands closer to the line of scrimmage and let his RAC acumen shine through.