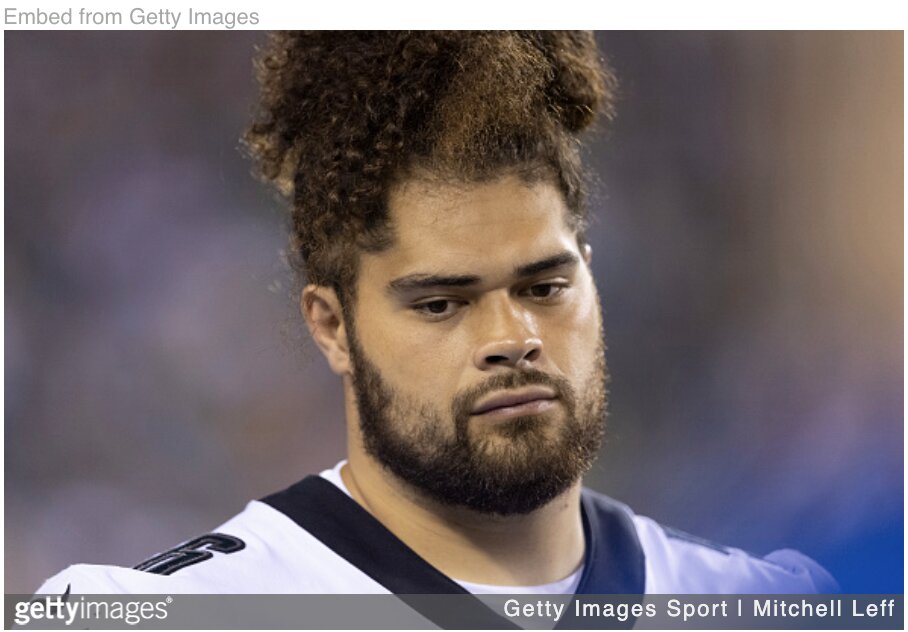 (LG Isaac Seumalo, out for the year with a Lis franc injury, was having a good start to the season)

Add left guard Isaac Seumalo to the growing list of wounded Eagles offensive linemen. The Eagles announced Tuesday that Seumalo is out for the rest of the season to undergo Lis franc surgery after the sixth-year pro injured his foot against the Dallas Cowboys on Monday night and left the field on a cart.

Seumalo, a 2016 third-round pick from Oregon State who played just nine games last year, will not play a full season for the fifth time in his six years. His replacement in Monday’s 41-21 loss to the Cowboys was third-year pro Nate Herbig, who could get the start Sunday against the Kansas City Chiefs.

The Eagles had already entered Monday night down two starters on the offensive line, with Pro Bowl right guard Brandon Brooks out several weeks from a pectoral strain and left tackle Jordan Mailata sidelined by a knee sprain from practice. It’s unknown Tuesday if Mailata will be ready to return against the Chiefs. If not, the Eagles will start the game with backups at three of the five positions.

The year 2020 called. It wants its Eagles back.

Adding injury to insult, the Eagles also will be without second-year safety K’von Wallace, who separated his shoulder and will be placed on injured reserve, testing the Eagles’ depth at a position in which they were already thin. Veteran safety Rodney McLeod has missed the first three games and hasn’t yet participated fully in practice as he comes back from an ACL injury last season that required surgery.  Wallace could return in a few weeks.

The last two Eagles games, both losses, have been costly for the team outside of the win-loss column. Defensive end Brandon Graham was lost for the year last Sunday when he ruptured his Achilles against the 49ers, and his absence was felt in run defense against Dallas, which logged 155 rushing yards from Ezekiel Elliott and Tony Pollard.

On the bright side, backup guard/tackle Jack Driscoll, who began the season on IR from a pectoral injury, could be available to start practicing this week if he’s medically cleared and would give the Eagles a potential replacement for Seumalo if he’s ready to play. A 2020 fourth-round pick, Driscoll started four games last season and played in 11, showing promise as the season progressed.