Miles Sanders’ legs, which accounted for 156 yards of total offense, powered the Eagles to a 29-21 victory at Lincoln Financial Field despite the deluge.

In a game that featured little margin for error, the Jags got on the board first courtesy of a 59-yard interception return for a touchdown from safety Andre Cisco off an ill-advised pass from Jalen Hurts. With Jacksonville ahead by 14 points after one quarter, the Eagles exploded in the second quarter, scoring 20 unanswered points and taking a six-point lead into halftime.

The two teams exchanged blows in the second half but after a scoreless third quarter, the Eagles added nine points while allowing a last-gasp 6-play, 68-yard scoring drive which culminated in an 8-yard touchdown connection from quarterback Trevor Lawrence to wide receiver Jamal Agnew. 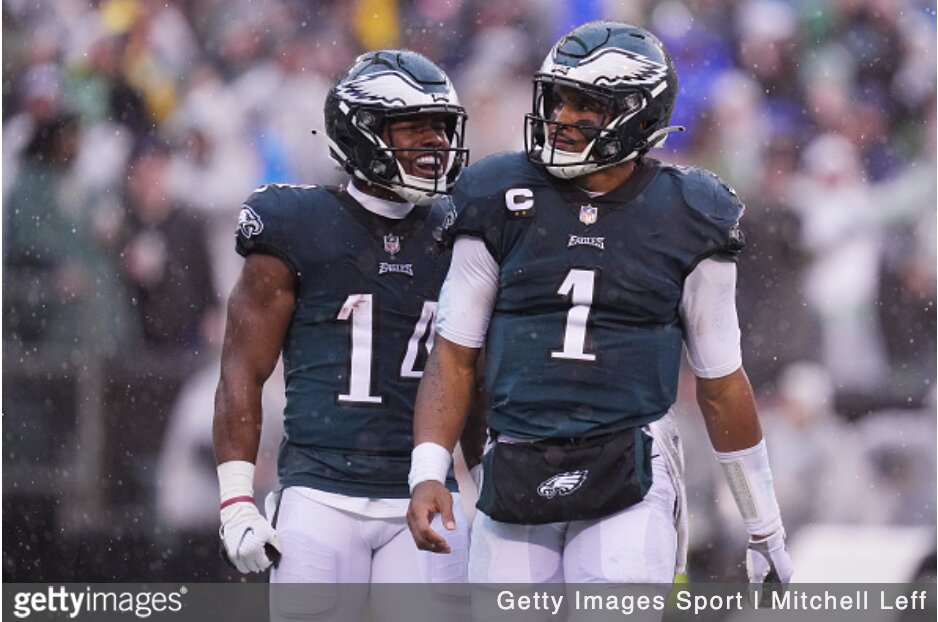 1) Ill-advised pass from Hurts on the Eagles’ opening possession, forcing the ball into double coverage to Zach Pascal, which was intercepted by safety Andre Cisco and returned for a 59-yard touchdown.

2) Jordan Mailata’s early absence was felt against an attacking Jaguars defensive front. Credit to Jack Driscoll for filling in at left tackle, but the third-year lineman appeared over-matched early against a relentless Jacksonville bull rush, but settled in as the game wore on.

4) Questionable decision to go for it on a 4th-and-3 late in the opening quarter, for an Eagles offense that was 0-for-3 on third downs at that point. The Jacksonville pass rush bore down, forcing Hurts to deliver a hasty desperation heave in the direction of A.J. Brown that ultimately landed out of bounds.

5) After stopping the Jaguars on a 4th-and-3 on the Eagles’ 34-yard line, the Eagles proceeded to march on a 7-play, 62-yard drive which culminated in Hurts converting a 4th-and-3 from the Jacksonville 3 to put the Eagles on the board, and Sanders capped a 9-play, 66-yard drive with a 10-yard touchdown run to even the score. Perhaps weather-related, but it is worth mentioning that Eagles coach Nick Sirianni showed tremendous confidence in his offense, going for it on fourth down a total of four times (3-for-4) in the first half. The Eagles finished 3-for-5 on fourth down attempts.

6) With a second-quarter 20-point eruption, the Eagles recovered from its first brush with adversity, a 14-point deficit, carrying a six-point lead into the break. While this might not have been the most efficient game from Hurts, I thought it was good to see him prevail in less-than-ideal circumstances. The third-year quarterback has proven he can win in a multitude of ways.

7) In a game in which the Eagles needed to heavily rely on running back Sanders, the fourth-year running back answered the proverbial bell, carrying 27 times for 134 yards and two touchdowns – a career-best in carries and yards – while adding a pair of receptions for 22 yards. Sanders not only showcased his open-field explosiveness, but also continued to demonstrate a decisiveness and downhill element to his game through four games. When it was apparent that Sanders’ performance and increased usage would be a key ingredient to the offense on Sunday, he showed his effectiveness.

8) A stark contrast with this Eagles team: The defense continues to generate timely turnovers. This week it was fumble recoveries from Fletcher Cox, Haason Reddick (two), and Javon Hargrave, and a third quarter red-zone interception from cornerback James Bradberry. While Gannon deserves credit for his personnel usage and evolution as a play-caller, the defense has also helped themselves with takeaways.

9) The Eagles’ second-half scoring woes continued. Following a Jaguars roughing the kicker penalty that nullified a Jake Elliot field goal to close out the third quarter, the Eagles had a scoring opportunity rendered futile on the heels of a Dallas Goedert drop on 3rd-and-8. Miles Sanders capped the ensuing drive with a 5-yard touchdown run. As I’ve written before, while the scoring scarcity might not have factored into the outcome, it behooves the Eagles to address the inefficiencies before it potentially becomes problematic.

10) The Eagles dominated the time of possession 39:51 to 20:09. Though likely attributed to the weather, the 4-of-14 third-down conversions left much to be desired.