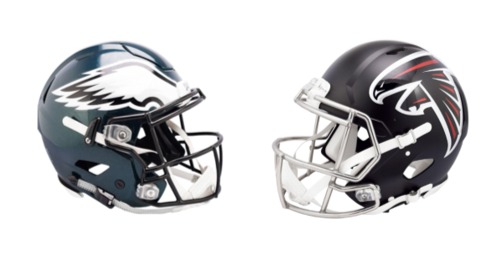 On Sunday, the Philadelphia Eagles take on the Atlanta Falcons at 1 p.m. at Mercedes-Benz Stadium in Atlanta.

Sunday marks the head-coaching debuts of the Eagles’ Nick Sirianni and the Falcons’ Arthur Smith and will be the first time in 48 years that two first-time head coaches have met in a season opener.

While the new regimes prepare to revive their respective teams, another prominent storyline is the anticipated unveiling of an Eagles remade offense, with second-year quarterback Jalen Hurts at the helm.

The Eagles will look continue their recent streak of opening day good fortune, but must dominate the line of scrimmage and win the turnover battle.

Here are some notable matchups to watch.

WR DeVonta Smith vs. CB A.J. Terrell: As the team’s de facto No. 1 wide receiver, Smith figures to draw second-year cornerback A.J. Terrell in his NFL debut. Terrell started 14 games for the Falcons as a rookie, racking up 74 tackles, 7 pass breakups, three forced fumbles, and an interception. The lengthy perimeter corner is smart, physical, and can flip his hips and run with anyone. However, his coverage acumen will be tested by Smith, a savvy route runner who can impact all three levels of the field and has an established chemistry with quarterback Jalen Hurts. Look for Smith to get involved early on short-to-intermediate routes.

TEs Zach Ertz and Dallas Goedert vs. Falcons linebackers: Given the inexperience at wide receiver, expect a heavy dose of 12 personnel featuring the tandem of Ertz and Goedert. Hurts developed a connection with his tight ends this summer and will have an opportunity to exploit the middle of the field, where linebackers Deion Jones and Foyesade Oluokun patrol. Additionally, middling, slow-footed safeties Erik Harris and Duron Harmon roam the back end, so look for Sirianni to be aggressive and capitalize on Goedert’s big-play potential downfield.

DTs Fletcher Cox, Javon Hargrave, vs. Falcons interior OL: The strength of the Eagles’ defensive line resides along the interior. After a stellar summer, Hargrave appears poised for a breakout second season in Philadelphia. With Fletcher Cox routinely commanding double teams, Hargrave figures to reap the benefits. Even if the disruptive tandem isn’t able to get home and bring down Matt Ryan, the interior penetration should be enough to unsettle the veteran signal-caller, as the collapsed pocket could lead to erratic throws. Rookie third-rounder Jalen Mayfield gets the start at left guard, while second-year C Matt Hennessy – who underwhelmed in two starts last season – and third-year RG Chris Lindstrom round out the interior. The inexperienced trio find themselves at a distinct disadvantage.

CB Darius Slay vs. WR Calvin Ridley: Slay fulfilled his role as the team’s undisputed top corner last season but also encountered challenges against some of the league’s premier pass catchers. While Slay’s struggles mostly surfaced when guarding big-bodied wide receivers, he’ll see a unique set of challenges from Ridley. The 26-year-old three-year WR will no longer benefit from playing across from Julio Jones but he will be peppered with targets thanks to a relatively limited supporting cast around Ryan. The Alabama product isn’t much of a burner, but he’s a superb route-runner and smoothly gets in and out of breaks with little wasted movement. The Falcons are likely to attack Slay’s aggressive tendencies at some point.

Entering his ninth NFL season, KR Cordarelle Patterson has returned 239 kicks for 7,118 yards and eight touchdowns. The 30-year-old wide receiver is explosive in the open field, but is unlikely to see many opportunities to showcase his game-breaking ability due to touchbacks.

PR Avery Williams was Atlanta’s fifth-round selection in April. The former Boise State standout was named the Mountain West Conference’s Special Teams Player of the Year in 2020 and moonlights at cornerback. Williams possesses terrific short-area quickness and vision, which could be a factor against a retooled Eagles special teams unit led by new coordinator Michael Clay.

Eagles punter Arryn Siposs makes his NFL debut after spending much of the 2020 season on the Lions’ practice squad.

This game marks the first time two rookie head coaches have faced each other in a season-opener since Sept. 16, 1973.

The Eagles have won 4 of their last 5 season openers but have lost three straight road games in Atlanta. They haven’t won in Atlanta since the 2009 season. The Eagles are 11-5 record against the Falcons since 2000, playoffs included.

Eagles WR Quez Watkins: The second-year WR was seldom utilized last season – 119 offensive snaps in six games – but the team’s preseason standout offers blazing speed and is electric in the open field. Two tight-end sets and a positional rotation could limit his snaps, but Watkins’ home run ability can shift momentum at any moment. If the Eagles can isolate him outside on cornerback Fabian Moreau, look for a deep shot or two.

Falcons TE Kyle Pitts: Pitts, the fourth overall pick in April’s draft, is the ultimate offensive weapon and mismatch in coverage for linebackers, safeties, and cornerbacks. It’s unknown how elaborate the Falcons will be with Pitts and his various alignments in his first NFL game, but there isn’t a defender on the Eagles roster equipped to slow one of college football’s most prolific playmakers from last season.

The Falcons have the home-field advantage and a proven, veteran quarterback navigating their offense, but the Eagles are much too dominant in the trenches. Atlanta shouldn’t be able to establish any sort of rhythm.