Mailata Still Out, Dillard Back In, Dickerson Status Unclear 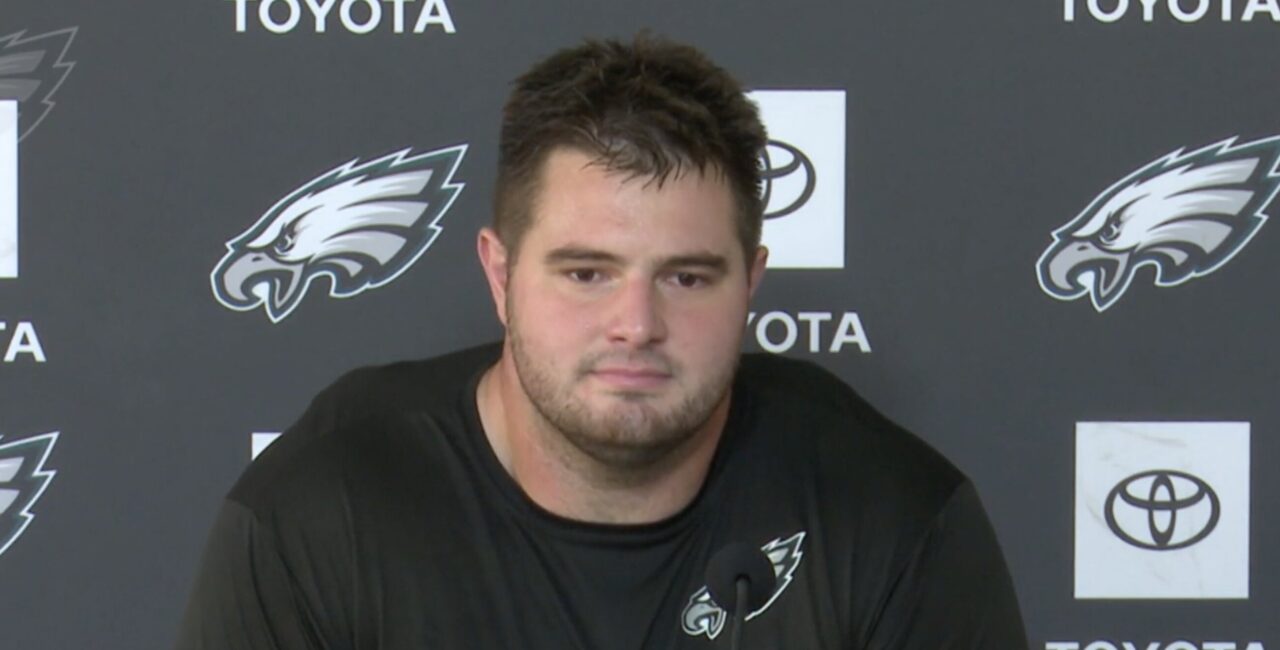 Eagles rookie offensive lineman Landon Dickerson on Thursday gave a harsh critique of his game play for the second straight week, saying he hasn’t performed to his and the team’s standard.

But it’s what the second-round pick isn’t saying that might be more telltale about the team’s plan for Sunday’s game against the Kansas City Chiefs at the Linc.

Asked if he expected to start Sunday, Dickerson only said he “expects to be traveling” and will do “whatever Coach wants me to do.”

The Eagles are home Sunday, so the only traveling should be the from the team hotel to the stadium. Eagles coach Nick Sirianni on Wednesday wouldn’t share publicly his plans to replace left guard Isaac Seumalo, who was carted off the field Monday night after suffering a Lis franc foot injury that will require season-ending surgery.

The week before, Sirianni had no problem announcing that Dickerson would start in place of an injured right guard Brandon Brooks, who remains out for several weeks with a pectoral strain.

Dickerson, coming back from an ACL tear in his last college game, didn’t have his first full practice with the Eagles until after the 53-man cutdown date, which could explain his early struggles. He also sustained a hip injury in Sunday’s 41-21 loss to the Cowboys, leaving his status for Sunday’s game against Kansas City somewhat in doubt.

The team could move Dickerson to left guard to replace Seumalo, knowing that Brooks will eventually be back, and replace Dickerson’s spot at right guard with backup Nate Herbig or Jack Driscoll. Herbig replaced Seumalo against the Cowboys but the team activated Driscoll off injured reserve this week and into the 21-day practice window.

The other, and unlikelier, scenario is to play Herbig and Driscoll at both guard spots, assuming Driscoll shows he’s ready to play. Dickerson would then become the top backup, giving a chance to get back up to speed and be fully healthy.

Dickerson was listed as a limited participant on the injury report Wednesday, which reflected how the Eagles would be listed if they had practiced. The team only held a walk-through. On Thursday, he was a full participant.

The Eagles are preparing to play Kansas City with an already depleted offensive line that will have three backups, including left tackle Andre Dillard, who filled in against the Cowboys for Jordan Mailata. An MCL sprain suffered in last week’s practice sidelined Mailata for the rivalry game and has kept Mailata out of practice both Wednesday and Thursday, clearing the way for Dillard to make another start.

“I’m just embracing my role and trying to be a star in my role,” said Dillard, the 2019 first-round pick who lost his competition against Mailata but played well against Dallas. “My role now is starting left tackle for this next game.”

As for Dickerson, the former Alabama star lineman knows he needs to be more impressive than his first two showcases, regardless of where or when he plays.

Dickerson didn’t mince words when evaluating his job against Dallas.

“No, still didn’t play up to standard,” he said. “You can rewind what I said last week. We have a standard here. I’m not gonna sit here and give you excuses why I did certain things. I’m gonna go to practice, look at film, as my coaches what I need to do, ask my teammates if they think can help, then just figure it out and keep getting better each day.”