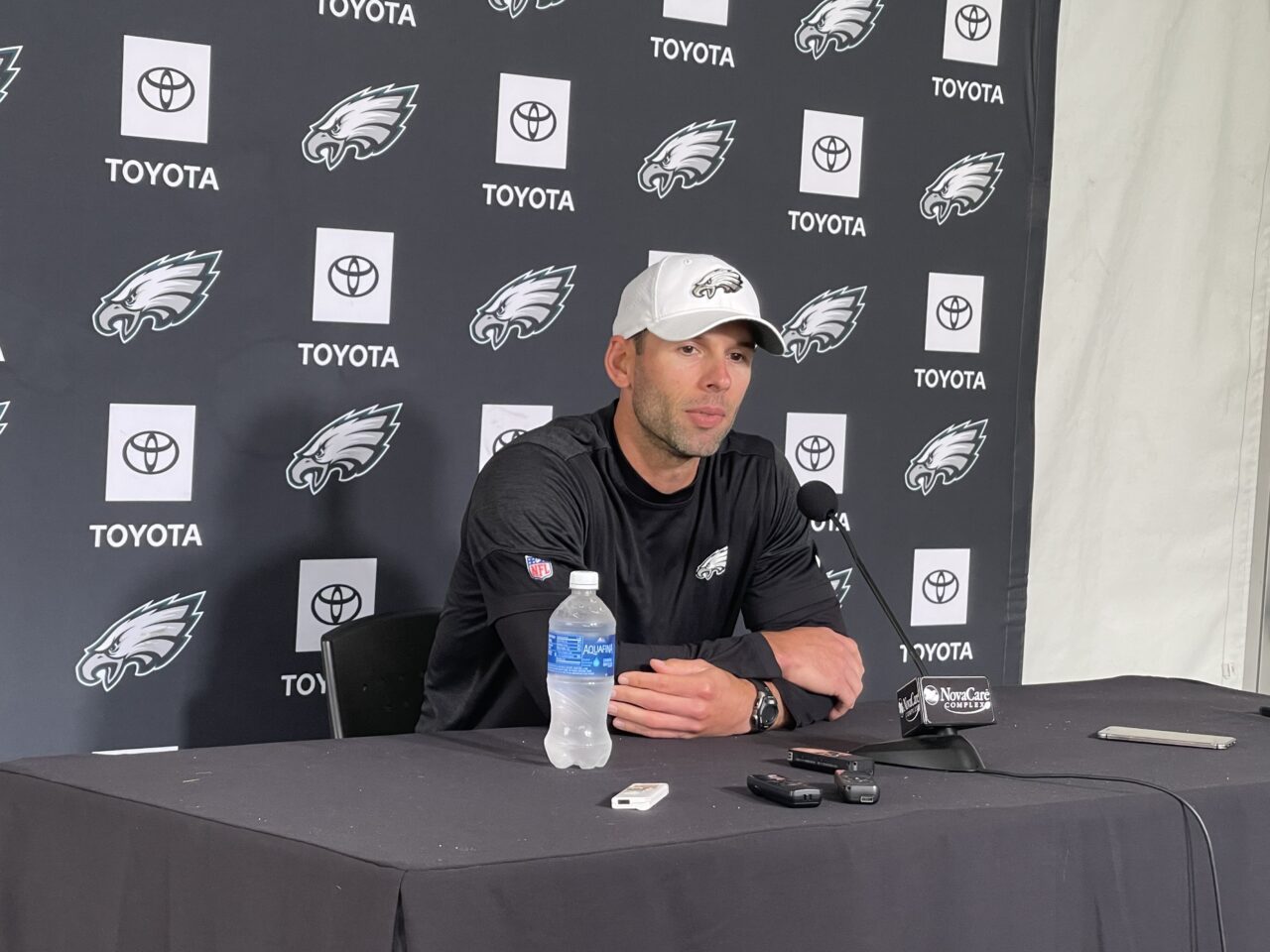 Despite heavy criticism around him, an upbeat and smiling first-year play caller doubled down Tuesday on his previously stated position that he doesn’t have a rigid scheme.

The evidence says otherwise, with four games worth of tape that reveal mostly two-deep coverages and predominantly nickel personnel groups.

This style of defense – we’ll use that term instead of scheme – contradicts the prior regime’s blueprint of playing one safety in the box to assist in run defense.

This style has also invited the Eagles’ last two opponents to run the ball down their throats, even in this Golden Era era of passing.

The Chiefs and Cowboys collectively rushed for 360 yards on 73 carries against the Eagles, an average of 4.9 yards per carry. The 1970s are jealous. You’d need a time machine to see an NFL team run the ball 73 times in consecutive weeks.

Andy Reid, of all people, finally ran the ball to the satisfaction of Philadelphia fans, just a decade too late.

But that’s what happens to a defense under construction and being molded from a new sculptor, and with puzzle pieces that don’t exactly fit.

Oh, wait, it’s not a scheme. Gannon has said this more than once, which is intentional.

He’s sending the message that what you’re seeing now, ugly as it might be, is an embryonic form of what he expects you’ll see as the season progresses, and even further down the road, when he has the personnel to match the game plan.

“There are certain things that go on that I am OK with that to … the eye of the public might be irritated at certain things,” Gannon said. “I’m not really concerned with that. I don’t really care about the statistics other than winning and losing. So, what we develop as a coaching staff and with the players, this is what we need to get done to win the game, that’s what I’m concerned with.”

So maybe two-deep isn’t a scheme but rather a philosophy, and don’t expect an alternate enlightenment before Sunday, when the Eagles face the Panthers in Charlotte, or beyond.

It’s tough to march downfield in 10-to-12 plays, 70-to-80 yards without a penalty, loss of yards play or turnover threatening to kill the drive. Unless, of course, you’re the Chiefs or Cowboys.

Anyone who’s watched Jim Schwartz’s defense knows Cover 1 looks with an average secondary is an excellent recipe for toast. Save for 2017, the Eagles have been especially average – to put it kindly – in the secondary since Reid’s heydays in the early 2000s.

Theoretically, Sirianni and Gannon have the right idea, but wrong personnel.  Cover 2 defenses are usually anchored by stout linebackers, playmakers at safety, and at least one massive interior lineman who can take on interior linemen at the point of attack.

The Eagles have light linebackers, average safeties, and their interior linemen are more accustomed to hitting quarterbacks than stuffing running backs. NBA superstars don’t see as many double teams as Fletcher Cox has seen through four games.

Their list of Eagles draft misfires at these key positions  are long, well-document and span multiple decades, which will be Sirianni’s and Gannon’s biggest obstacle in the offseason.

For now, though, Gannon shouldn’t get a free pass because of personnel.

He can make schematic wrinkles to alleviate the workload on his lineman from eating up blocks, and to get his linebackers flowing downhill faster. If he’s not comfortable with an extra cornerback in dime packages, he can employ some three-safety looks with Marcus Epps instead of asking linebacker Eric Wilson to cover superhuman athlete Tyreek Hill.

If Gannon is as good as his league reputation is, he should be expected to right some wrongs of this run defense and help groom some of the talent he inherited. Doing the same thing and expecting a different result would be malpractice.

But at the end of the day, Gannon’s roots are in organizations that drafted and developed some of the league’s top linebackers, safeties and corners – Harrison Smith, Anthony Barr, Eric Kendricks and Xavier Rhodes in Minnesota under head coach Mike Zimmer and Darius Leonard in Indianapolis under defensive coordinator Matt Eberflus.

The Vikings and Colts could live in nickel and dime and still field elite defenses that weren’t gashed week to week by opposing running backs.

The Eagles? They’ve got Darius Slay and six other Steady Eddies on the back end.

There’s a reason why Steven Nelson, Anthony Harris, Rodney McLeod, Wilson, Alex Singleton and T.J. Edwards are here on 1-year deals or at the end of their contracts in 2021.

You should expect improvement from this Eagles defense, but don’t expect any landmark changes in scheme or philosophy, and the best advice is have some patience.

This is a work in progress. It was always meant to be. Right now, that’s their … philosophy.