Despite many takeaways after the 38-35 victory over the Detroit Lions, the true answers to major questions about the Philadelphia Eagles lie in the All-22.

On the latest episode of the Inside The Birds podcast, Adam Caplan and Geoff Mosher break down the All-22 tape from the Week 1 matchup. 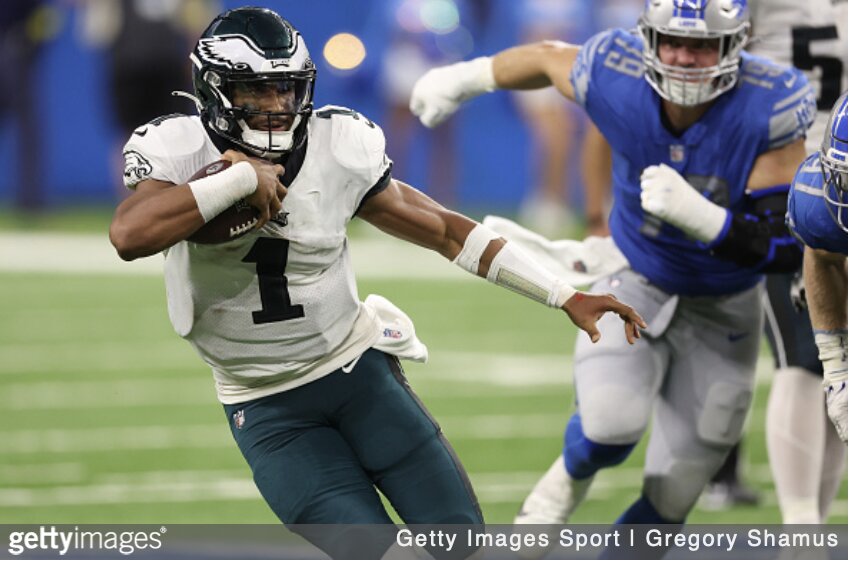 Jalen Hurts’ dynamic playmaking was key to the Eagles 38-35 victory in Week 1.

Geoff Mosher: “From quarter one to quarter four, I thought that was the best decision-making from Jalen Hurts for the entire game. The decisions he made knowing that the Lions were coming at him from different directions, disguising where they were coming from, and him running that much, to not turn the ball over and not put too many balls at harm’s risk, that’s winning play from a quarterback.”

Adam Caplan: “This is the most explosive that Hurts has looked. I would argue he has never come close to looking this explosive.”

Mosher: “It was really fascinating to watch the tape. There were five or six plays you could identify very quickly where he should have been stopped. This game could have turned on its axis about a thousand different times based on it being a game of inches. There were a couple of plays there where he made them miss by just enough – and that’s all it took.”

Caplan: “Recognition and communication is in our notes from our sources. (Jordan) Mailata had some issues, (Isaac) Seuamlo had some issues. (Jason) Kelce was unbelievable in the run game and Lane Johnson was dominant. They had some very bad leaks in pass protection, six versus five. It was the first game of the year and they have this tape now. This is where bad tape will become good tape. This is all correctable.”

Mosher: “There was a play – just to illustrate the confusion issues,  they call it unscouted looks, the  Lions did a lot of crazy stuff – the only play where Hurts got sacked is when they overloaded the left side of the offensive line so the slide protection went that way, and then they brought a nickel cornerback blitzing from the right side. That has to get picked up, because they kept Kenny Gainwell into block. But he and Kelce wound up blocking the same guy up the middle and that left Jalen Hurts to be dead meat from the nickel blitzer.

Mosher: “It is very rare that one human being out of 11 is going to change the complexion of the game. Yes, you can have a pass rusher cause a lot of havoc and get the quarterback off of his spot a lot. You can also have a run defender – and Jordan does this well – cut into the gap and redirect the running back to the point where he has to cut back and he gets tackled. But he gets tackled. The point is you can have a catalyst, you can be in the run defense, but at the end of the day, you need your teammates to be up to speed on the defense, too. What you saw, whether Jordan Davis was on the field or not, was just a piss-poor display of technique, form, angles from all levels. There were a couple of guys that played well, but you just saw a lot of bad tackling that Jordan Davis cannot cure on his own. There were rushing touchdowns that happened when Jordan Davis was on the field.”

Caplan: “It starts in practice. Guys who perform at a high-level play more. Doesn’t matter how many years you play. This kid, physically he can handle more snaps. Performance-wise, he’s not ready. There’s so much he needs to learn.”

Caplan: “(Javon) Hargrave and (Fletcher) Cox, they didn’t have one of their better games. I will tell you one thing, they got moved off of the ball. I can’t remember the last time I mentioned Fletcher Cox getting moved. This is why the linebackers were not clean versus the run. (Kyzir) White, who was terrific in pass coverage and (T.J.) Edwards is also good in pass coverage, when you say they didn’t do well against the run it’s because the guys in front of them didn’t clean them up. When the offensive linemen can get to the next level and get to the smaller linebackers, of course they’re not going to be able to start the run.”

Caplan: “One guy who’s very familiar with Philly because it’s one of his teams he has to study told me, ‘What is Philly trying to do defensively? Ok, they’re multiple, we knew this in January. What are they doing to impact the quarterback?’”

Mosher: “They’re playing so many people up front. It feels like the master chef’s got too many ingredients here and he’s trying to make this amazing casserole with everything in it instead of just giving everyone some roles in situations and simplifying it.”