From Backups To Starters

In the aftermath of a few key injuries in Week 10, fantasy owners suddenly find their respective rosters in flux and vulnerable, with Cooper Kupp, Zach Ertz, and Dallas Goedert among the casualties.

Fortunately, this week’s waiver wire  presents an assembly of young talent poised to help you manage the interim ahead of the stretch run.

Let’s take a closer look at some sensible roster maneuvers and lineup advice to consider as you navigate injuries and bye weeks: 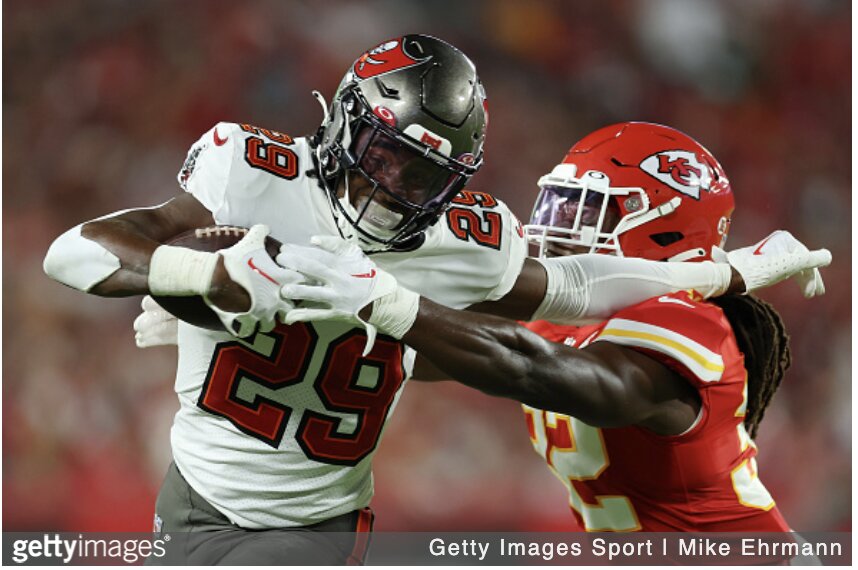 Bucs RB Rachaad White is pilfering snaps from veteran Leonard Fournette and could vault into the lead spot.

RB Rachaad White, Tampa Bay Buccaneers: At this stage, White is presumably available in only the shallowest of leagues. With Leonard Fournette battling a hip ailment, the rookie rusher accumulated 105 yards on 22 carries against the Seahawks in Munich, Germany, a week ago. The Bucs are on a bye this week, but White – who has gradually eaten into Fournette’s snaps – could well end up in a 50-50 timeshare with Fournette down the stretch.

RB Isaiah Pacheco, Kansas City Chiefs: There is an outside chance that Pacheco’s sporadic production banished the rookie running back to the waiver wire multiple times since first appearing on this list, but consider this to be the curtain call. Kansas City’s backfield has finally come into focus, and Pacheco’s season-high, 16-carry, 82-yard rushing performance against the Jaguars cemented his status as the team’s lead back. With veteran Jerrick McKinnon spelling Pacheco on passing downs, Clyde Edwards-Helaire has become an afterthought.

WR Christian Watson, Green Bay Packers: The unequivocal top claim in leagues everywhere ahead of Week 11, Watson erupted for three touchdowns in a win over the Cowboys, surpassing the 100-yard receiving threshold for the first time in his career. Between seemingly earning the elusive trust of quarterback Aaron Rodgers, and with Allen Lazard drawing the opposition’s top cover man, Watson’s long-awaited emergence has likely commenced.

TE Trey McBride, Arizona Cardinals: The first tight end selected in April’s draft – and widely considered to be the most prolific pass-catcher of the bunch – McBride become the Cardinals’ top tight end in the wake of Zach Ertz’s season-ending knee injury. The tight end position is too shallow for a “wait-and-see” approach, so I’m preemptively rostering McBride as my upside-laden second tight end but stashing him on the bench.

TE Juwan Johnson, New Orleans Saints: When it comes to upgrading the tight end position, expectations must be tempered, especially this late in the game. However, Johnson has recorded four touchdowns over the past four weeks, despite failing to eclipse the 44-yard receiving barrier. The converted wide receiver has developed into a viable red-zone option for the Saints and should be among the top streaming options this week.

WR Jameson Williams, Detroit Lions: The Lions are reportedly hopeful that Williams, their first-round pick recovering from a torn ACL, will begin practicing after Thanksgiving. While the timeline could vary, if you have an IR spot available, Williams could be a late-season lottery ticket.

RB Keaontay Ingram, Arizona Cardinals: When news broke of Eno Benjamin’s release on Monday, my initial thought was that this was a definitive vote of confidence for Ingram, the Cardinals’ sixth-round rookie. Given James Conner’s extensive injury history, Ingram is now likely a play away from taking the lead. Monitor his usage this week.

RB David Montgomery, Chicago Bears: With Khalil Herbert shelved on Injured Reserve, the Bears’ backfield solely belongs to Montgomery. While Montgomery has delivered underwhelming production the past two weeks, look for him to get back on track against a Falcons defense ranked 23rd against running backs.

RB D’Onta Foreman, Carolina Panthers: Foreman has registered double-digit carries in three of the last four games – including a whopping 31 last week against the Falcons. The downhill bulldozer figures to be in line for another 20-plus carries against a middle-of-the-road Ravens defense against fantasy running backs. The volume is enticing.

RB Antonio Gibson, Washington Commanders: Gibson picked up 44 yards and a touchdown on 14 carries in Monday night’s upset over the Eagles. While his running mate, Brian Robinson, handled more than 10 more carries, Gibson is the more dynamic of the two Commanders ball-carriers and the preferred option squaring off against a Texans defense ranked 32nd against fantasy running backs. I think he reaches a season-high in rushing yards this week.

WR Rondale Moore, Arizona Cardinals: Moore has developed into a target monster for the Cardinals in recent weeks, commanding 31 over the past three games. Within that span, the second-year receiver has amassed 255 receiving yards and a touchdown, surpassing the 90-yard receiving barrier twice. Moore should be viewed as a WR2/Flex option this week against the 49ers.