PHILADELPHIA – A buzz of anticipation swept South Philadelphia – and the NFL world – Monday night as the undefeated Eagles prepared to face off against the NFC East-rival Washington Commanders.

But for the Taylor Heinicke-led Commanders, the second encounter this season between longtime foes ultimately proved victorious, as the Commanders upended the Eagles, 32-21, handing them their first loss of the season.

As the bell for Round 2 sounded, the Eagles defense took the field, thwarting the Commanders opening possession before a roughing the kicker infraction afforded Washington a fresh set of downs.

Josh Sweat’s strip-sack on the ensuing play, followed by Marlon Tuipulotu’s recovery, awarded the Eagles the football at the Washington 18-yard line, where the Eagles offense cashed in on a three-play, 18-yard drive that culminated in a Jalen Hurts one-yard touchdown run.

The two teams proceeded to trade blows throughout the opening frame, with Washington entering the break up 20-14.

The Commanders extended its lead to nine late in the third with a 32-yard Joey Slye field goal before the Eagles responded with a lengthy score drive of their own that covered 80 yards on 12 plays, culminating in an 11-yard DeVonta Smith touchdown to narrow the lead to two.

The Commanders parlayed a Dallas Goedert fumble into a 55-yard Slye field goal to extend the lead to five with 7 minutes, 33 seconds left in the final frame, and a Quez Watkins fumble on the ensuing drive – after reeling in a 50-yard catch – all but extinguished the team’s chances of mounting a comeback. 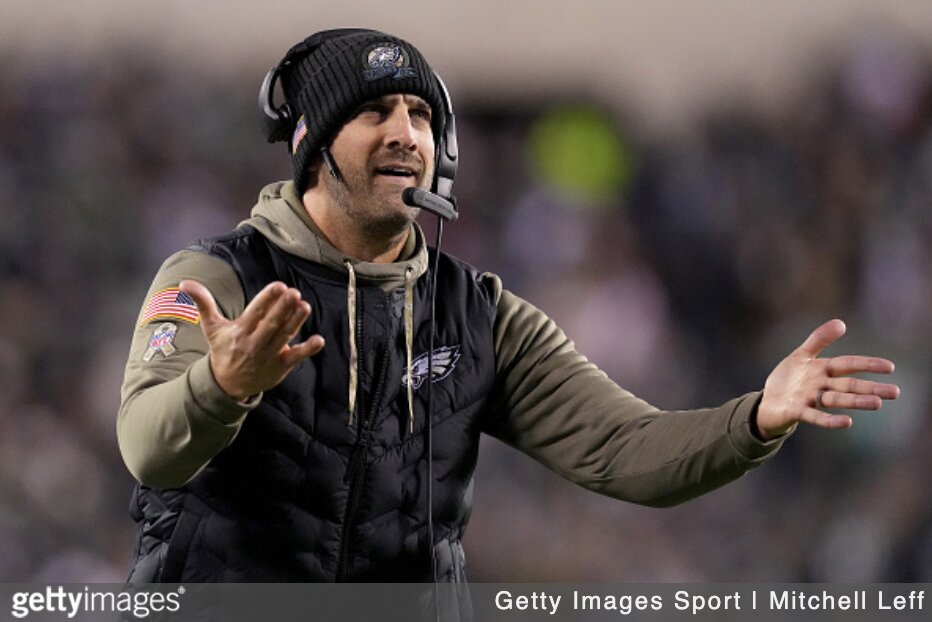 1. The Eagles commit another egregious special teams error – a Reed Blankenship roughing the kicker penalty – temporarily negating a strong defensive stand and awarding Washington a fresh set of downs. On the ensuing play,  Sweat stormed through to strip-sack Heinicke, causing a loose ball that was recovered by Tuipulotu on the Washington 18-yard line. The Eagles parlayed the turnover into a Hurts 1-yard touchdown plunge. The opening sequence was a prime example of complementary football to counter the Commanders’ initial jab.

2. After watching Texans running back Dameon Pierce gouge the Eagles for 139 rushing yards 10 days ago, the Commanders – predictably – unveiled a run-heavy blueprint with running backs Brian Robinson and Antonio Gibson. Catalyzed by a 26-yard connection from Heinicke to wide receiver Terry McLaurin, the Commanders’ second possession covered 75 yards on 13 plays, with Gibson capping the drive with a 1-yard touchdown run. Washington opened in 12 personnel. Robinson and Gibson combined for 10 carries within the first two drives, as the Eagles’ vulnerability between the tackles persists.

4. Hurts’ second quarter interception – his third of the season – was just the Eagles’ fourth giveaway of the season. Granted, this is the Eagles’ second giveaway in as many weeks, but the Eagles entered Week 10 with a league-leading plus-15 turnover ratio. Baltimore, sporting a plus-7, is a distant second. Fumbles by Dallas Goedert and Quez Watkins on consecutive fourth quarter drives halted any chances the Eagles had of taking the lead.

5. The Eagles’ second offensive possession further illustrated the unique conundrum that Hurts presents for opposing defenses. In an effort to accentuate his skill set and put defenses in flux, the Eagles incorporated a new wrinkle: the jump pass. Teams have to respect Hurts’ ability to manufacture yards with his legs, so when Hurts received the snap with 1:33 left in the opening frame, he sold the run just enough to complete a 6-yard jump pass touchdown to Dallas Goedert.

6. The Commanders were alarmingly efficient on third down, converting 9-of-12 third-down attempts in the first half. Washington also dominated the time of possession, 23:49 to 6:11, and accumulated 18 first downs.

7. A highly compensated Eagles pass rush – which compiled nine sacks in the first meeting – failed to generate much of a push up front and allotted ample time for Heinicke to navigate the pocket. However, on a 3rd-and-3 from the Philadelphia 14-yard line, the rush got home at a crucial moment, with Javon Hargrave bursting through to bring down Heinicke for an 11-yard loss and forcing a field goal. This was Hargrave’s sixth sack in the last three games, but the Eagles need more from its supporting cast of pass rushers.

8. Despite being the Commanders’ lone receiving threat, Terry McLaurin had a field day against the Eagles’ secondary, amassing eight receptions for 128 yards on 10 targets. Credit a couple of pinpoint passes from Heinicke – notably the 41-yarder down the right sideline – but adjustments should have been made at the break, when McLaurin had 76 yards on six catches. For perspective, the team’s next leading receiver was Curtis Samuel, who managed just one reception for 23 yards on three targets.

9. Facing a nine-point deficit, an unwavering Eagles offense responded with a 12-play, 80-yard touchdown drive capped by DeVonta Smith’s 11-yard touchdown reception. The drive featured a healthy dose of Miles Sanders, who felt underutilized in this one, and a pair of precision passes to Quez Watkins and Dallas Goedert, which accounted for 31 yards on consecutive plays. Given the magnitude of the moment, that will be a drive they can build off of moving forward.

10.) The Eagles emerged from their 10-day lull wildly undisciplined, yielded seven penalties (75 yards) and coughing up the football up three times. They’ll need to clean things up as the venture into the stretch run.