In the wake of a mini bye week, a rested Eagles team will look to correct its flaws and perpetuate its momentum against a Taylor Heineke-led Commanders team that valiantly fell short to the resurgent Minnesota Vikings, 20-17, a week ago.

Let’s take a look at four players poised to make an impact on Monday night: 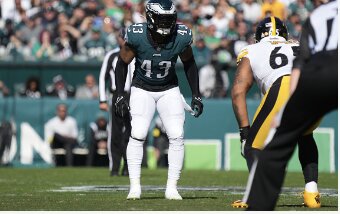 GETTY IMAGES: Eagles LB Kyzir White and his teammates need to be ready to tackle better vs. Washington

TE Dallas Goedert: The Hurts-to-Goedert connection accounted for eight receptions and 100 yards against the Texans – Goedert’s first century mark of the season – as well as a touchdown, his first since the Week 3 demolition of the Commanders at FedEx Field. Goedert, who is averaging just shy of eight targets per game over the past four outings, has developed a tremendous chemistry with Hurts that continues to blossom and become the offense’s undisputed secondary receiving option after wide receiver A.J. Brown. Look for the Eagles to exploit the short-to-intermediate areas of the field on Monday night, against a Commanders defense that just allowed nine receptions for 70 yards – on nine targets – to Vikings tight end T.J. Hockenson.

LB Kyzir White: White’s defense of a 3rd-and-9 pass intended for running back Rex Burkhead in the end zone a week ago further illustrated how much speed, range, and versatility the Eagles have on defense. The pronounced sideline-to-sideline prowess, fluidity, and instincts of the former Chargers linebacker are evident in seemingly a few plays every week. With Washington presumably plotting to unveil a run-heavy, quick passing game, White figures to be a prominent contributor in thwarting its effectiveness. His speed on the perimeter will be paramount in closing lanes for running backs Brian Robinson and Antonio Gibson and limiting gains on check-downs.

RB Antonio Gibson: The decisive Week 3 victory makes it easy to forget, but going into the break, the Commanders actually outrushed the Eagles (66-46), with Gibson averaging a healthy 5.8 yards per carry. Despite an ineffective passing game, Gibson thrived churning out yards between the tackles, where the Eagles’ defense has been most vulnerable. The Eagles defense ranks 28th in yards allowed per carry (5.2), so expect the Commanders to replicate the Texans’ blueprint by establishing the run and shortening the game against a team that just allowed Texans running back Dameon Pierce to run roughshod. According to Pro Football Focus, the Eagles missed a staggering 14 tackles last week in Houston, which has been a troubling trend through eight games. With that knowledge, Washington might employ the quick passing game to counter a ferocious pass rush, forcing the Eagles to tackle its skill players – namely Gibson — in open space.

DT Daron Payne: Payne managed six tackles, a sack, four tackles for loss, and a pair of quarterback hits a week ago, wreaking havoc against the interior of the Vikings’ offensive line. The Alabama standout also accounted for a tackle for loss and quarterback hit the last time he faced the Eagles. Along with running mate Jonathan Allen, the prolific Washington d-tackle tandem is more than capable of derailing an offense. Last week, Lovie Smith’s defense – hardly considered a world-beater – succeeded in penetrating and bearing down on Jalen Hurts, which could be something to watch for as the ascending Eagles eye another fast start.