Look At Me Now

After Years On Bench, Epps Shining As Starter

As the Eagles celebrated their 26-17 prime-time victory over the rival Dallas Cowboys, safety Marcus Epps stood at his locker, fielding questions about a ball-hawking secondary that had just tallied 12 pass breakups and three interceptions to thwart a hapless Dallas aerial attack.

While Epps didn’t come away with any of Cooper Rush’s three interceptions Sunday night, the fourth-year safety made a critical play on Philadelphia’s second defensive series, laying out to break up a pass intended for tight end Peyton Hendershot on a third-and-4 from the Dallas 41-yard line.

The Cowboys were forced to punt – 59 yards for a touchback — and the Eagles proceeded to march on a clock-draining, seven-minute, 36-second scoring drive that culminated in a Miles Sanders 5-yard touchdown run. 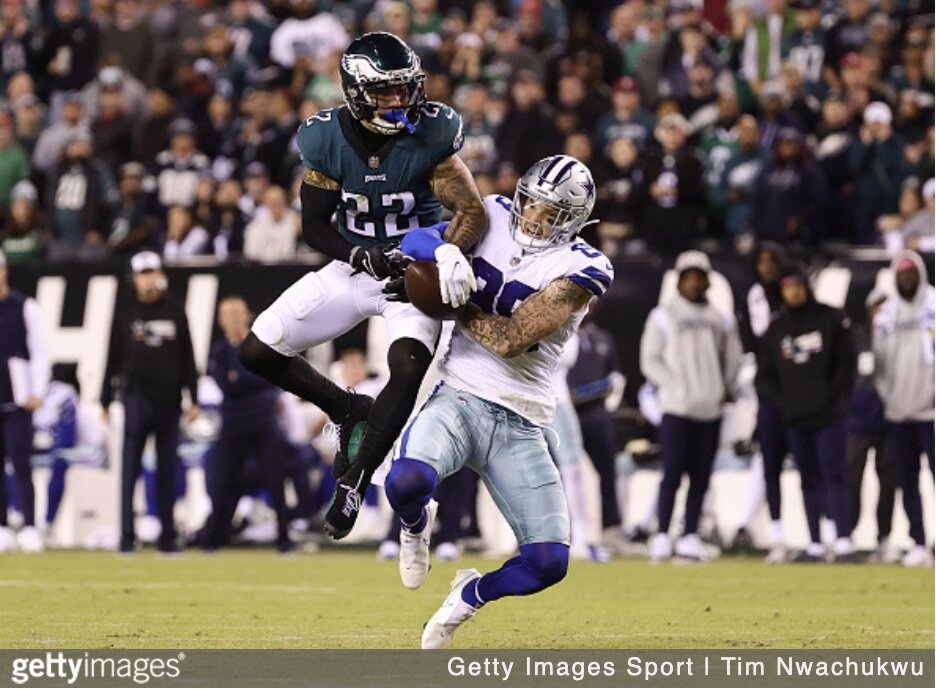 Epps’ drive-halting deflection was just one of the Eagles’ 67 defensive plays in the game – likely overlooked in the grand scheme, but it served as another example of how quietly impressive the once-maligned Epps has been in his first season as a full-time starter.

Through six games, Epps has accumulated 33 combined tackles (two for loss) – third most on defense — and three passes defended. He’s also the only Eagles defender to have logged all 390 defensive snaps.

In the midst of a jubilant locker room, the 26-year-old reflected on some of his key takeaways since becoming a full-time starter.

Not long ago, Epps had been the target of intense scrutiny.

In the wake of missing out on former New Orleans Saints safety Marcus Williams in free agency, and then failing to address the team’s most depleted position group on draft weekend, the Eagles were left with no other choice but thrust Epps into a starting role.

Having never started for a prolonged period at the professional level, Epps’ viability in that role remained in doubt.

Despite some highlights from 2021 coming off the bench, Epps was still best known as the young safety who got beat by D.K. Metcalf in the waning moments of the Eagles’ wild-card loss to Seattle 2019, allowing a 36-yard reception that put the game away.

He was also the one who was hurdled by 49ers wide receiver Brandon Aiyuk en route to a 38-yard touchdown run on Sunday Night Football in 2020.

But it’s hard to ignore the trajectory of Epps’ snap share over the past two seasons, which increased from 33 percent in 2020 to nearly 45 percent last season.

The uptick in playing time suggested the team was optimistic about his future.

Moreover, the fact that two different defensive coordinators, Jim Schwartz and now Jonathan Gannon, placed a considerable amount of confidence and trust in Epps to effectively execute his assignments within their respective schemes shouldn’t be understated.

In his new role, Epps displays that same toughness, tenacity, and football intellect that has enabled him to overcome the odds and emerge into a starter.

The game appears to have slowed for Epps, as he’s playing noticeably faster and with less restriction.

Once on the fringes of the 53-man roster, Epps has become one of the Eagles’ brightest success stories and and a shining example of player development.

Considering his performance and projection, Epps has positioned himself as a prime candidate for the team’s next wave of contract extensions.

The Eagles have ensured they set Epps up for success by providing him with a versatile, established running mate who has playmaking tendencies to patrol the middle.

Aligning alongside Epps is 24-year-old C.J. Gardner-Johnson, completing perhaps the most effective safety tandem in the conference. Gardner-Johnson, of course, was acquired in the eleventh hour – along with a 2025 seventh-round pick — from the New Orleans Saints ahead of the season-opener in exchange for a fifth-round pick and the lower of their two sixth-round picks in the 2024 NFL Draft.

Six games into his Eagles career, Gardner-Johnson is tied for second in the NFL in interceptions with three – two of which he corralled on Sunday night. Three interceptions already tied a career-high, while his 372 snaps qualify for fourth-most on defense, along with his 31 tackles.

“I think those two are doing an excellent job,” Gannon said recently. “They know their role. I know they want to keep improving, both of those guys. But those are two huge pieces to have with their skill set, both of those guys, what it allows you to do with some of the coverage structures.”

Although they share opposing personalities – Epps being more reserved and soft-spoken while Gardner-Johnson is more vibrant and outwardly assertive – the centerfield duo maintains a synergistic bond and play together in lockstep.

“You know, I think it’s really good to have two safeties that are versatile and can do a lot of different things,” Epps added. “I think it helps out our defense a lot. And I just feel like each week, we’re getting more comfortable playing with each other in terms of communication and things like that. So, I just feel like we’ve got a long way to go, and we can be so much better.”

With more than a quarter of the season gone, the Eagles’ secondary is rounding into form and playing at a level that can mirror – maybe even exceed – the standard set during the Andy Reid era.

This year’s version already has nine interceptions and defended 27 passes through six games. The cohesion should continue to evolve as the Eagles navigate the ebbs and flows of an NFL season.

“Honestly, I attribute it to the way we work, the way our chemistry is off the field,” Epps said, “and then, our two DB coaches, [Dennard Wilson] and coach D.K. [McDonald], they do an amazing job preparing us and getting us ready to play.”